Hillary: Identifying as a ‘Capitalist’ Hurt Me Since So Many Democrats are Socialists

Hillary: Identifying as a ‘Capitalist’ Hurt Me Since So Many Democrats are Socialists 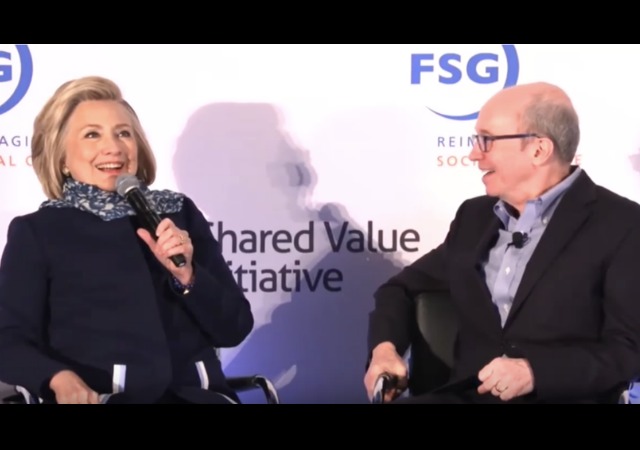 I guess since everyone has decided to distance themselves from her, failed Democrat presidential candidate Hillary Clinton has run out of cares to give.

At a Shared Values Leadership Summit, Hillary actually said that identifying herself as a capitalist hurt her in the primary because so many Democrats are socialists.

From The Daily Beast:

“Probably,” she said when asked by Time Inc. Brands CCO Alan Murray if the declaration hurt her. The pair appeared in conversation as part of the Shared Value Leadership Summit in New York City.

“It’s hard to know but I mean if you’re in the Iowa caucuses and 41 percent of Democrats are socialists or self-described socialists, and I’m asked ‘Are you a capitalist?’ and I say, ‘Yes, but with appropriate regulation and appropriate accountability.’ You know, that probably gets lost in the ‘Oh my gosh, she’s a capitalist!’” Clinton concluded, partly referring to the popularity of her primary rival, Sen. Bernie Sanders (I-VT), who ran as a self-declared democratic socialist.

Here’s a reminder from the first Democratic debate in 2015 at Fox News where Sanders said he is not a capitalist:

“Do I consider myself part of the casino capitalist process by which so few have so much and so many have so little?” he asked. “By which Wall Street greed and recklessness wrecked this economy? No I don’t.”

Clinton, meanwhile, offered a defense of capitalism, saying: “When I think about capitalism, I think about all the businesses that were started because we have the opportunity and the freedom to do that and to make a good living for themselves and their families … We would be making a grave mistake to turn our backs on what built the greatest middle class in the history.”

Well, I mean, I sort of agree with Hillary on the socialism-Democrat description. You may not identify as a socialist, but if you supported Sanders, WHO IS A SELF-DESCRIBED SOCIALIST, then yeah…you might be a socialist. But then again, there are some who supported Sanders because they hate Hillary and sick of the Clintons.

I also find it funny that she thinks of herself as a capitalist since she desires so much government regulation. The words FREE MARKETS and LAISSEZ-FAIRE probably make her cringe.

Yeah, I know which kind of capitalist she is: CRONY.

Yep. Like her supporter and contributor. Donald J. Trump.

Oh, you mean like the Chinese and the EU have been using against us since NAFTA?

You know, I was going to let that ignorant, snide remark pass, but some others here might be willing to learn something new.

NAFTA lowered tariffs between the US, Canada, and Mexico. Since it was signed, China and the EU have invested in and built assembly plants in Canada and Mexico (mostly in Mexico, cheaper labor) to assemble products (think cars) and ship them into the US relatively duty-free. Meanwhile, they keep high tariffs on our products (once again, think cars) and avoid WTO sanctions for dumping. The result has been the destruction of our manufacturing sector.

This is the type of “free-trade” you support your “principles”.

Countries don’t invest in plants, you poor moron. Companies do.

Mexico does very well in trade because it has few tariffs.

Oh, you mean like the Chinese and the EU have been using against us since NAFTA?

Yes, exactly. And your point is?

NAFTA lowered tariffs between the US, Canada, and Mexico. Since it was signed, China and the EU have invested in and built assembly plants in Canada and Mexico (mostly in Mexico, cheaper labor) to assemble products (think cars) and ship them into the US relatively duty-free.

Yes, this is a good thing.

Meanwhile, they keep high tariffs on our products (once again, think cars) and avoid WTO sanctions for dumping.

If we place tariffs and restrictions at the EXACT SAME rate as other countries do on our goods, would you agree that is not “protective” but simply equitable – an encouragement for both sides to lower their tariffs.

No. I’d say that was BIG GOVERNMENT screwing with your life.

Yes, Trump does buy off corrupt politicians. At least, that’s what he told us himself, remember? That is the very definition of crony capitalism and Trump voters are the ultimate marks.

When you have a business to run and need something from corrupt Dems you have to do what’s required to succeed.

You have been nominated for the Nobel Prize in Rationalization.

No, for once he’s 100% correct. Paying bribes is rarely a choice. It’s usually the cost of doing business. Accepting them is always a choice.

This is why the Bible repeatedly condemns accepting bribes but says not a word against paying them. On the contrary, when Jacob sent his sons down to Egypt to convince the ruler to return their brother, he instructed them to bring a nice present for this ruler, “a little balsam and a little honey, beeswax and lotus, pistachios and almonds”.

To survive in liberal crooked New York, sometimes you have to act like a New Yorker.

He is corrupt. There are no excuses. I guess you aren’t one of those conservatives whose parents taught you right from wrong.

What hurt her with socialists was rigging the primaries to get rid of Bernie, and pissing off all of his socialist supporters. So actually, it was just another of the numerous ways she shot herself in the foot.

and the rest of us got the festering pus boil.

i’m sure that was it, sugartits: you being a corrupt, dishonest drunken lout of an insincere sow had *nothing* to do with it, i’m sure.

I’m surprised she hasn’t found a way to include global warming and cultural appropriation in her parade of blame.

‘Ladies and gentlemen, as I look over this list of reasons I didn’t win, I come now to number 271….’

Hillary’s not remotely a capitalist.

Despite what Marx and Engels might lead one to believe (and even they weren’t totally serious about it), capitalists are not parasites.

Of course Bernie’s a parasite too.

Really? It wouldn’t surprise me, but I’ve never heard of this. What has she ever stolen, and from whom? To the best of my knowledge her gig has always been bribe-taking. Stealing is a different guild.

Hillary is a fascist, not a capitalist, but that’s not why she lost.

She lost because she’s a vile, venal witch who should be in prison by now. Hillary is so pathetic she couldn’t even rig an election sufficiently enough to beat a political neophyte like Trump.

If you want to define capitalism as selling political favors for personal gain, then yes she is.

Neither of the treasonous Clintons have a conscience. They’ve both been caught taking money from protagonists in the morning then taking more money from antagonists in the evening. They charge big bucks to tell gullible people what they want to hear. So closet communist Hillary made the tactical mistake of claiming to be a capitalist and that’s supposedly why she lost. Now I don’t blame her for not wanting to look in a mirror but if she really wants to know why she lost, she needs to look in a mirror. Lying about not being a communist didn’t help.