North Korea’s motive might be related to economic reforms begun in 2012, following the more successful Chinese and Vietnamese models. 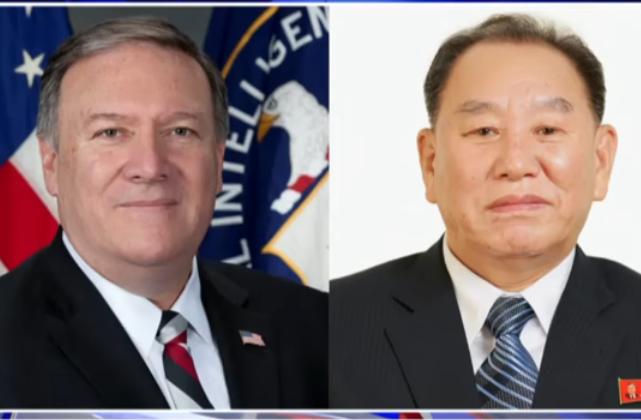 Earlier this week, Mary Chastain noted that Kim Yong Chol, Pyongyang’s longtime spy chief and a vice chairman of the ruling Workers’ Party, was on his way to the United States to continue negotiations for a “Peace Summit”.
U.S. Secretary of State Mike Pompeo met with Chol, a close aide of North Korean leader Kim Jung Un, for about 90 minutes over dinner without much comment to the press.

Pompeo would only say that the dinner “was great” and that the two men dined on “American beef.”

It was not yet known whether the two men made any progress toward narrowing long-standing differences between Washington and Pyongyang that could end decades of hostile relations.

While the chat with the press was brief, Pompeo did set forth the American position in a very Trumpian manner:

Looking forward to meeting with Kim Yong Chol in New York to discuss @Potus potential summit with Chairman Kim. We are committed to the complete, verifiable, and irreversible denuclearization of the Korean Peninsula @StateDept

One of the questions many people have been asking is why is the North Korean leader Kim Jong-Un making the move toward the United States and South Korea now. One argument is that Kim has decided it would be wiser to invest in business instead of bombs. In fact, reports from defectors indicate that he is in despair over the country’s economy.

A video of North Korean leader Kim Jong Un crying about his country’s terrible economy while surveying its coast is said to be making the rounds among the country’s leadership — and it could be a sign he’s ready to cave in to President Donald Trump in negotiations.

Japan’s Asahi Shinbun quoted a defector with contacts inside the country as describing a video in which a narrator explains Kim is crying that he can’t improve North Korea’s economy.

The defector reportedly said the video surfaced in April and high-ranking members of North Korea’s ruling party viewed it, possibly in an official message from Kim to the party.

Last week, Asian news reports further suggest that Kim is now looking to China and Vietnam for economic inspiration rather than ideological and military support.

[Chinese] President Xi, on his part, has expressed support for North Korea’s new shift to focus on the development of its economy.

Mr Kim, reported the Nikkei Asian Review, hopes to follow in the footsteps of China and Vietnam.

Under the open-door policy introduced by paramount leader Deng Xiaoping in 1978, China opened up its economy to foreign investors, setting the then impoverished economy on a trail-blazing path to become the world’s second largest economy.

…At his April 27 historic summit with South Korean President Moon Jae In, Mr Kim said that he aims for Vietnam-style reforms, the South’s Maeil Business Newspaper has reported.

What is even more intriguing that Kim appears to have begun the move to such reforms in 2012, shortly after succeeding his father.

…Kim Jong-Un and his advisers have quietly been doing over the last three years – albeit the slow-motion transformation of the country has attracted little attention from outside world.

The first significant step was the introduction of the so-called “June 28th Measures”. These measures were introduced in 2012, but only became fully into force in 2013. While on paper, they did not look that ground-breaking, they represent a sweeping reform of agricultural management in the North.

The “June 28th Measures” allowed North Korean farmers to create their own production teams of five or six people. It was not explicitly stated, but it was a signal that individual households should register as “production teams”. Such teams were given a plot of land, the assumption being that they would toil the same area for several consecutive years. The land technically remained under the jurisdiction of the state-owned and state-managed “collective farm”, but the produce would henceforth be split 70:30 between the state and the production team (ie the family). Up until then, North Korean production teams had been much larger, and all produce had to be submitted to the state in exchange for a fixed daily grain ration that was allocated to every farmer.

Such splits were spread among a number of other sectors as well.

The next few weeks will likely show us how serious the North Koreans are about returning to the civilized world. The only people likely to be unhappy with a successful conclusion of the Peace Summit are the Democrats and the American press.

It’s a damned indictment on just how fucked in the head the left is that they would prefer the talks to fail horribly rather than Trump succeed and bring REAL peace to the Korean peninsula.

Just like the left adopting MS-13, the left really us that fucked in the head!!

“The land technically remained under the jurisdiction of the state-owned and state-managed “collective farm”, but the produce would henceforth be split 70:30 between the state and the production team (ie the family).

Up until then, North Korean production teams had been much larger, and all produce had to be submitted to the state in exchange for a fixed daily grain ration that was allocated to every farmer.”

I guess all progress is relative – until kim jong fatboi murders the relative.

There are many moving parts to this scenario. First, the Nork’s nuclear program and military most likely bankrupted the country. I think lil rocketman (kim jong fatboi) knew it was just a matter of time before that house of cards collapsed, so he was playing a game of chicken with the West. He was hoping for a sweetheart deal like Obama gave to Iran, then some more from SouthKor, or even from Japan.

Being a bully can get expensive, and lil rocketman didn’t count on Trump with a bigger button that works. The collapse of the Norks’ nuclear test site at Mantapsan drove home the brutal reality of epic failure. Lil rocketman didn’t need much convincing after that to give up a literally steaming pile of rubble.

For decades, China was the Nork’s few worthwhile trading partners, and basically acted as a sugar daddy for the kim family until March of this year when China slapped United Nations economic sanctions against the Norks which reduced trade between them by as much as 90 percent. That drove home the brutal reality of economic ruin.

Lil rocketman didn’t need much convincing after that to walk across the DMZ, hold hands and make nice photo ops with SK Pres. Moon; Or rollover for Trump, give up 3 hostages, and send his No. 2 guy, hat-in-hand, to NY to play Let’s Make a Deal! with SoS Mike Pompeo.

I just hope that Trump is careful about handling that letter and making sure it isn’t poisoned.

What happens if the people of NK see what they’ve been missing all these years?