They aren’t innocent. They want to destroy Israel. 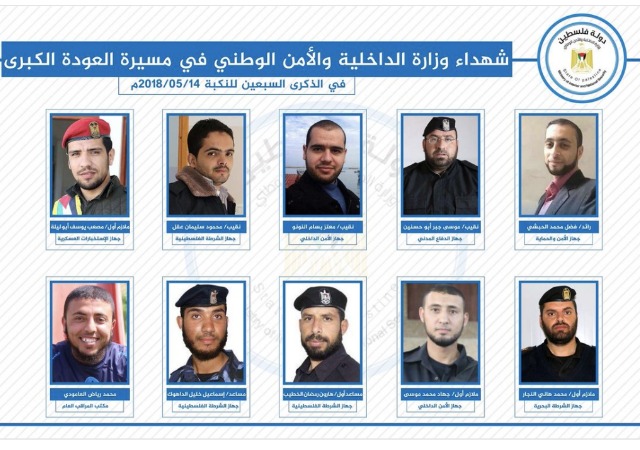 On Monday, Kemberlee blogged about the “protests” by Palestinians on Israel’s border as the U.S. opened its embassy in Jerusalem. We all know these weren’t protests. Hamas organized this assault since March and called it the “Great Return March.” Other groups participated with Hamas.

The terror groups have mourned their dead and propped them up as martyrs.

Hamas Planned The Violence On The Gaza Border. The Media Act As Their Propaganda Arm. https://t.co/v1rMs15mf0 pic.twitter.com/ZFlIw2omQM

According to the Times of Israel, “‘Rioters are hurling pipe bombs and firebombs at IDF troops, burning tires, throwing stones and burning objects, with the intention of setting fires in Israel and hurting IDF troops,” the army says.”

Three rioters were killed by the IDF while attempting to install a bomb along the Israel/Gaza border fence:

The Israeli army says it killed three armed Palestinians who were attempting to lay a bomb on the border fence with Gaza.

“Moments ago, an IDF patrol foiled a bomb-laying attack by a cell of three armed terrorists near Rafah, close to the border. This is a particularly violent protest point. The troops responded with fire at the terrorists. The terrorists were killed.”

The IDF also says an Israeli aircraft targeted a Hamas post in Jabaliya after shots were fired at Israeli troops stationed in the area. There were no Israeli casualties, the army says.

Israel says 35,000 Palestinians are protesting at a dozen locations along the Gaza border.

Hamas and its supporters have mourned those who died on social media: 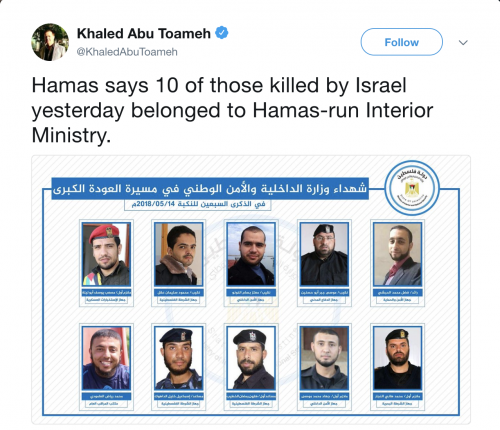 So while the media claimed Israel killed so many children, think about the organizations those children belonged to. In the image below, the male on the far right is 16-year-old Ahmed Adel Mousa al-Shaer. (Islamic Jihad Movement Al Quds is the armed wing of the Palestinian Islamic Jihad, a separate terror group from Hamas, which receives a lot of finances from Iran. It has also seen a power surge as the international community takes down Hamas. Yes, it’s main objective is the destruction of Israel.) 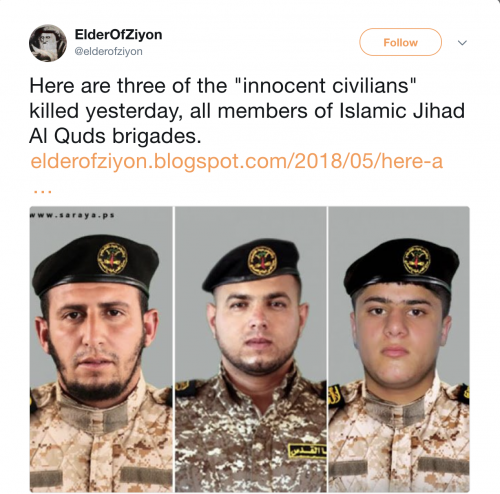 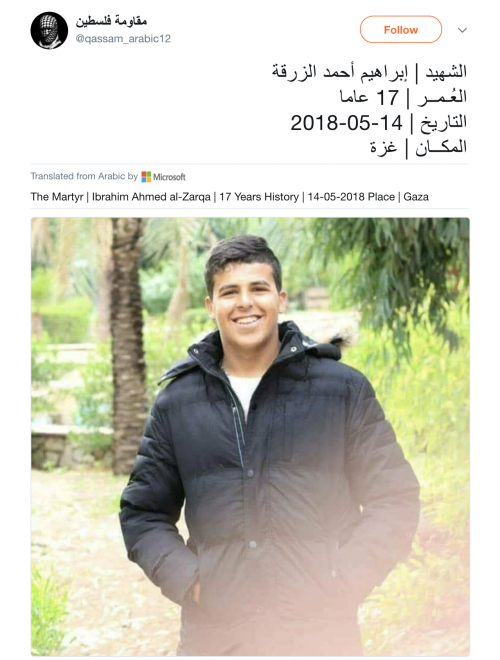 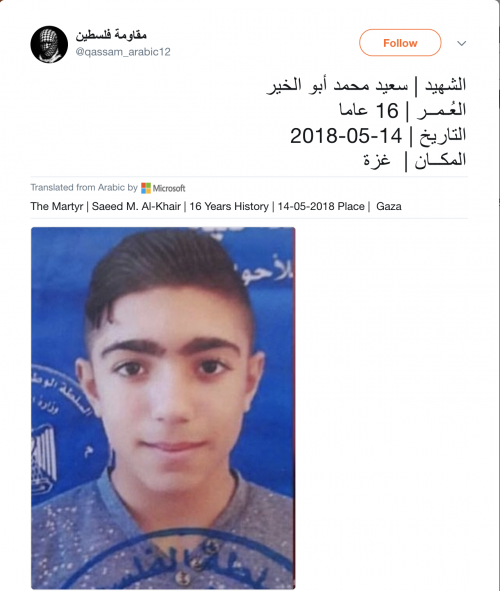 Looks like this father already indoctrinated his young child to hate Israel: 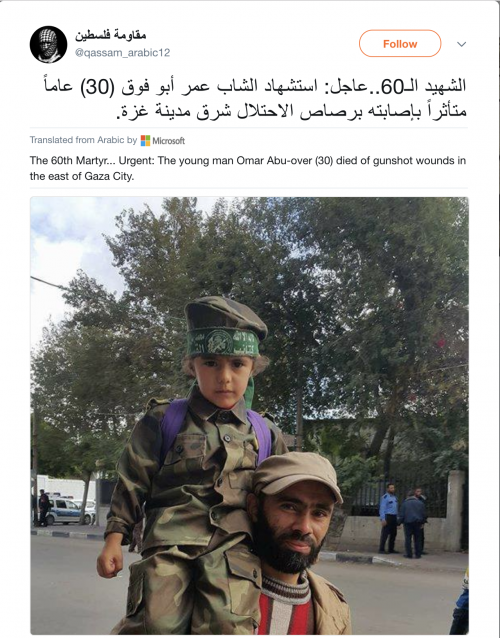 How much you want to bet these children end up in Hamas? 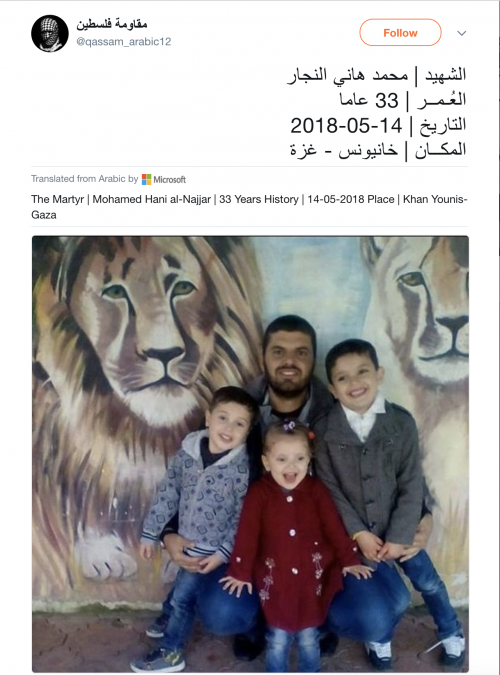 Here are the others: 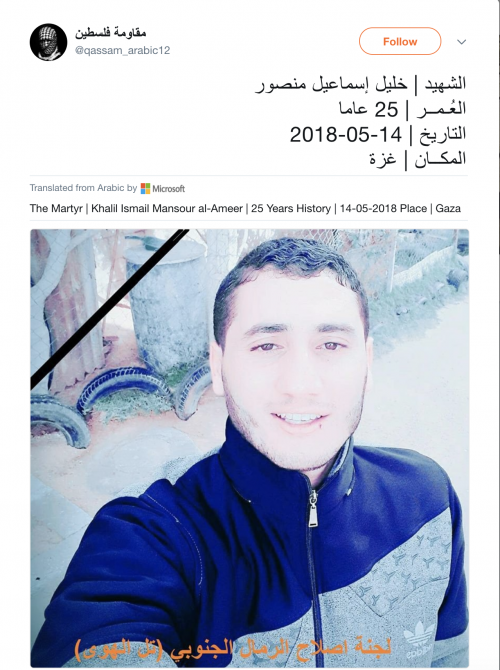 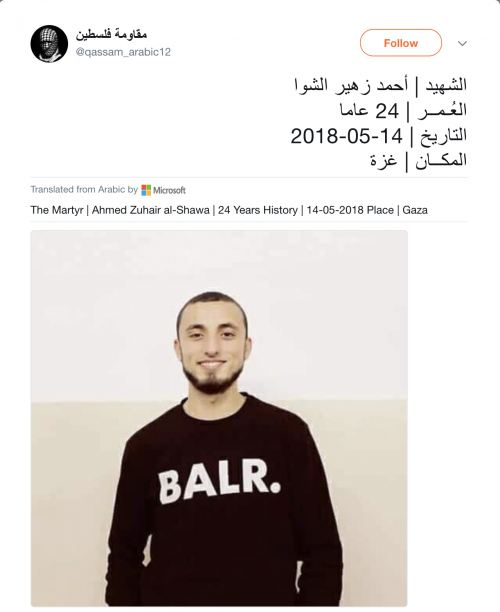 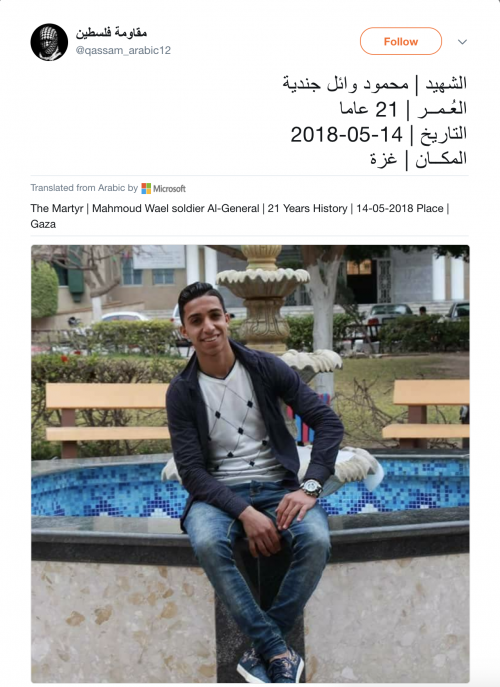 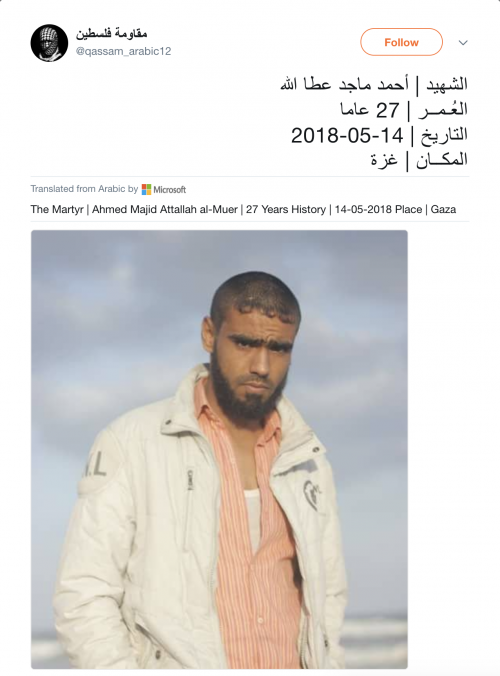 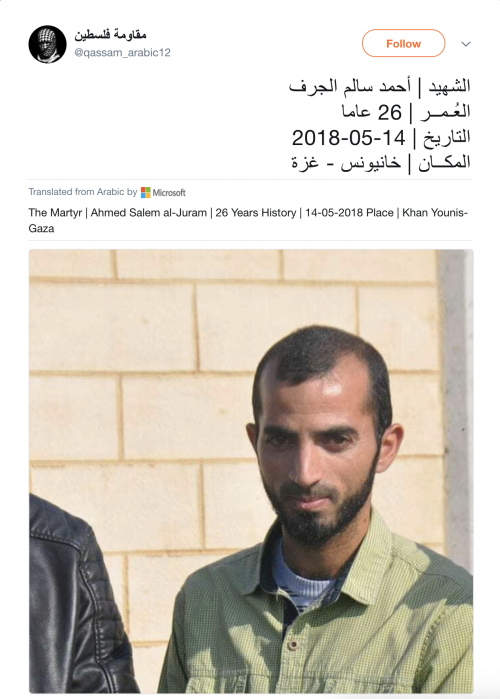 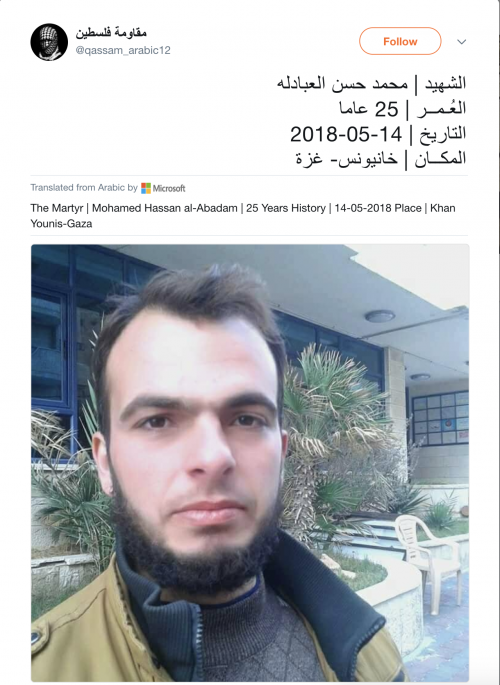 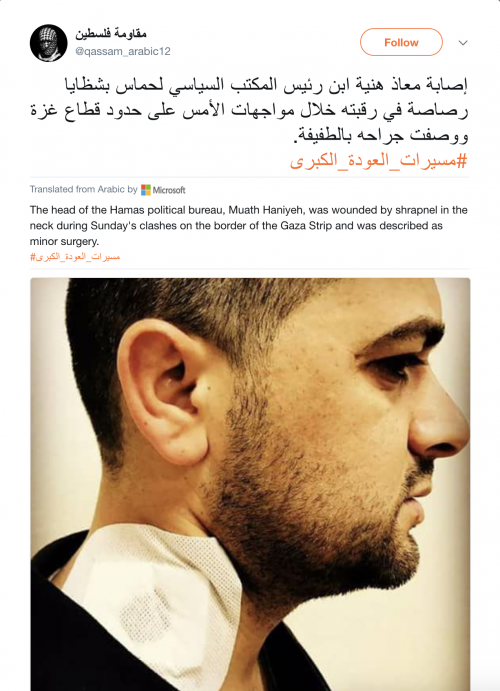 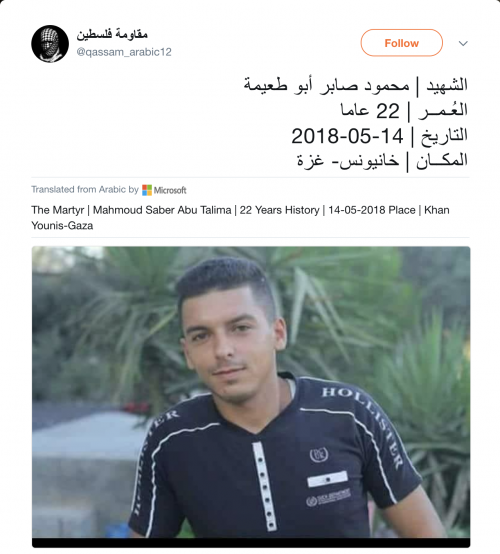 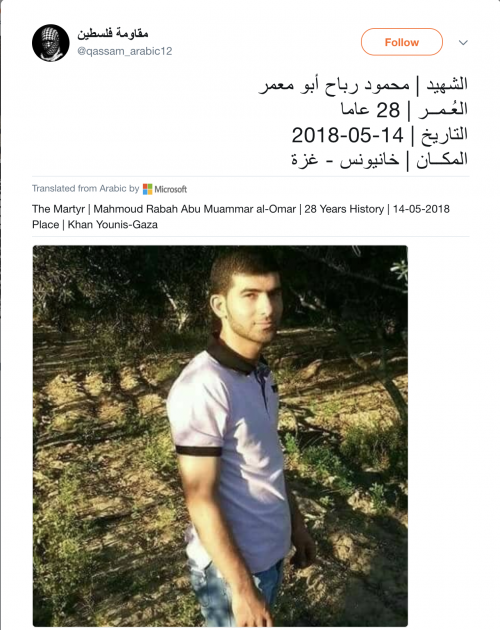 Even a senior Hamas leader admitted it has nothing to do with peace:

Senior Hamas Official Mahmoud Al-Zahhar on Gaza Protests: This Is Not Peaceful Resistance, It Is Supported by Our Weapons pic.twitter.com/aut0Q7SPD9

A lot of those children martyrs have some receding hairlines

I wonder if they’re really dead. I recall about 10 years ago seeing video of a Pally “funeral” procession where the “martyred”guest of honor was being hauled on a board in the streets, covered by a flag but with his face showing. The pallbearers stumbled and unceremoniously dumped the “corpse” onto the street, whereupon he dusted himself off and somewhat under protest got back onto the board to be carried to the cemetery.

Never underestimate the gullibility of the media.

You can be sure obama and kerry provided social security benefits for them.

Put the word “embassy” on a building and they go berserk. Makes perfect sense.

I heard on the news that an 8-month old baby was killed during the “protests”. Who the hell takes a baby to a protest? People looking to get the baby hurt or killed to gain victim points and sympathy around the world, that’s who. These Muslim hordes are vile pigs and have a special place in hell for endangering children to create better propaganda.

The MSM resorts to some tried and true Yellow Journalism.

For those keeping score, casualty totals from yesterday:

That’s some damn fine generalship by Hamas there.

hint to Hamas – you may think you’ve got martyrs, but those are a dime a dozen in your part of the world, and that’s one thing you already had in abundance. In the world of reality, you guys just tossed 58 of your most loyal followers into the trash, and you got absolutely NOTHING at all in return. Smart, very smart.

I have a hard time believing the casualty numbers after having seen so many videos of dead Palestinians rising from the field.

resurrection of the ‘dead’ – from pallywood, at a theater near you!

Hamas has really put themselves into a box on this, haven’t they? (without realizing that they’ve done it, of course) If they tell the truth that casualties weren’t nearly that high, then they will be admitting that the Israeli’s showed remarkable restraint. If they go with the high numbers, they are admitting that Hamas leadership was incredibly stupid in trying to charge an armed and defended border.

Maybe Darwin was onto something with his theory of survival of the fittest.

Between April 4, 1945 and the first of July, 1945 Japan launched some 3500 Kamikazi aircraft against the US Navy’s Fifth Fleet, the Fleet that came to fight and stay, that fought and stayed. When Japan ran out of pilots and aircraft to fling against our fleet, the assault ended.
When Hamas runs out of protestors willing to die for their cause, the protests will also end.

They need help creating more martyrs. These are some of the most useless people the world has seen.

When Hamas runs out of protestors willing to die for their cause, the protests will also end

I think they’ve already encountered a big shortage so..

They lie to them.

The atmosphere grew more charged after midday prayers, when more than 1,000 men gathered under a large blue awning. Officials from Hamas and other militant factions addressed the worshipers, urging them into the fray and claiming — falsely, to all appearances — that the fence had been breached and that Palestinians were flooding into Israel.

Speaking of antifa… I had a thought that the leadership of groups like antifa and the Black Panthers must have noticed Israel’s reaction to a violent attack against its IDF at their border, and must recognize that Trump approves of Israel’s reaction. Gulp. Both groups have gotten a free ride at many of their violent outbursts in America, but that may well be at an end, that American law enforcement will respond in kind to any future violent episodes. Pass the popcorn, Bob.

As I’ve said here repeatedly, the question of AntiFa or any other disruptive group isn’t intractable or even hard.

Enforce the law. Simple as that. If a campus LEO force won’t, chunk up to the next level LEOs.

The people of the U.S. WILL support that.

I believe some famous General once commented that the idea was not to die for your country, it was to make the other guy die for HIS country. I heard that this thought might have been laced with *bad words*.

Some listened, some apparently did not…

I saw that movie. Spoiler alert – the Allied forces win.

They aren’t innocent. They want to destroy Israel.

the fact that they want to destroy Israel doesn’t make them guilty.

What makes them guilty is that getting people killed was the sole and only purpose of the whole exercise. (just in case Israel didn’t act, they made a few steps toward attack)

Hamas was broadcasting on loudspeakers that the Israeli soldiers had cut and run, so ..charge..

Most of them didn’t know what they would do if they did get to the other side. Throw rocks? Kill people? They had no concrete plans.

I have to feel that the purpose of all of this is to provide some justification for an Iranian attack from the north – except maybe Israel destroyed a lot of that a week ago, and its not ready

From the New York Times article I linked to:

At 5:30 p.m., shortly after an Israeli airstrike in Gaza, organizers who had been urging people toward the fence all day suddenly began shooing them away, and the day’s action quickly subsided.

So maybe all or some of this could have been avoided had Israel attacked an important Hamas target at the start.

Nice hats. They will look good on the crosses.