Hawaii Geologist: “The situation is still very dynamic here at Kilauea; we are watching it around the clock” 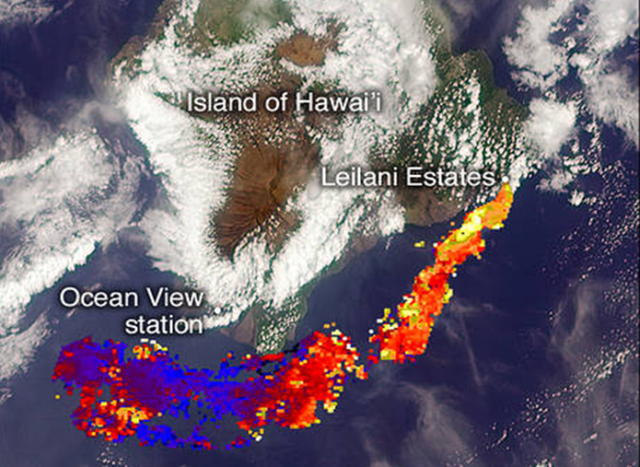 Hawaii’s Kilauea volcano has been erupting continuously since our last report, and geologists are now warning that it may be entering a new phase of explosive eruption not seen in almost a century.

[United States Geological Survey] USGS scientist Tina O’Neal said Friday there are continuing high levels of earthquake activity and ground activity that suggests magma is still close to the surface. There were no eruptions overnight, but the O’Neal said the situation is still unstable.

Geologists are warning a possible explosion at the summit of Kilauea could be the largest in nearly 100 years, hurling boulders the size of refrigerators. Since last week, lava has been siphoning away for the volcano’s summit, breaking through the ground in the 15 fissures. As a result, lava levels inside the volcano’s main crater have been decreasing. If more rocks and boulders fall into the crater, it could create a blockage and pressurize steam as the lava reaches groundwater levels. The resulting explosion can blast rock and ash for miles.

In the most recently issued status update, Neal said, “The situation is still very dynamic here at Kilauea; we are watching it around the clock”.

Fortunately, the range of potential volcanic bombs would likely be limited.

Tina Neal, the scientist-in-charge of the U.S. Geological Survey’s Hawaiian Volcanoes Observatory, said geologists don’t expect the summit eruption to be life-threatening so long as people stay out of the national park. Volcano and other nearby communities may be showered by pea-sized fragments or dusted with nontoxic ash but they aren’t expected to get hit by large boulders, she said.

Since May 3, the State of Hawaii and Hawaii County have spent more than $400,000 in emergency funds to protect life and property from lava flows and earthquakes that have occurred in the Kilauea East Rift Zone.

…According to the governor’s office, costs will “skyrocket” should air and/or sea evacuations become necessary.

“As more fissures open and toxic gas exposure increases, the potential of a larger scale evacuation increases,” said Gov. Ige in a statement. “A mass evacuation of the lower Puna District would be beyond current county and state capabilities, and would quickly overwhelm our collective resources.”

The National Aeronautics and Space Administration has been tracking Kilauea’s plume of has and sulfur-rich gas via satellite.

The information from the images acquired at different view angles is used to calculate the height of the plume, results of which are superimposed on the right-hand image. The top of the plume near the fissure is at approximately 6,500 feet (2,000 meters) altitude, and the height of the plume decreases as it travels south and west. These relatively low altitudes mean that the ash and sulfur dioxide remained near the ground, which can cause health issues for people on the island downwind of the eruption.

As of this post, 27 homes have been destroyed, 1,900 residents have been evacuated and thousands more are poised to do so, Hawaii National Volcanoes Park is closed, and crews are scrambling to remove ens of thousands of gallons of highly flammable chemicals from a geothermal power plant out of the path of the lava flows.

About 2,000 people have been evacuated since eruptions began last week. pic.twitter.com/qrQul3LuiN

WATCH: The mesmerizing and relentless lava from the Kilauea volcano has caused mass destruction in Hawaii, displacing thousands since May 3. pic.twitter.com/GVZKMezxc3

Prayers for everyone impacted by this eruption continue.

TheFineReport.com in reply to notamemberofanyorganizedpolicital. | May 12, 2018 at 2:57 pm

Lay his jumbo fake-wife in front of the lava flow. That’ll stop it.

snopercod in reply to notamemberofanyorganizedpolicital. | May 12, 2018 at 5:01 pm

I hope the lava doesn’t burn up his birth certificate!

notamemberofanyorganizedpolicital in reply to snopercod. | May 12, 2018 at 5:33 pm

Are the predicting the lava flows to reach Kenya?

WARNING: A volcano may explode.

Even this hayseed knows that, duh. 😉

All over the world we have people building in disaster prone areas. How about Houston, subdivisions where 30′ deep water can occur, New Orleans, below sea level.
As long as building code allows this, and others will bail out those stupid enough to build, problems will continue.
I can see building houses on stilts where the highest flood level might be 8′ – 10′, not hurricane prone areas.

Who could have ever predicted that building communities and industry on top of an active volcano could be risky?

The thing about volcanoes is that they often produce really good soil substrate over time. So people farm on them, and every 100 or 1000 years it erupts, kills them all, and then after a dozen years people move back and the cycle starts again. My neighborhood volcano, Mt Tabor, has been pretty dormant for the last 300K years so most of us feel it is safe to build. But the two places in the US I wouldn’t live for geographical reasons are on the downslope of Kilauea and anywhere along a river between Rainier and Puget Sound. It is only a matter of time before Mr. Lahar comes to visit.

Met Rainier is in the same shape. Seattle would be wiped out if it decided to go liberal and explode.

that brought a smile to my face. I think I need to reflect on that… and have a Saturday afternoon beer. Hmmmm.

Look at what Mt St Helens did to the Pacific Northwest and it was just a tiny explosion.

This is all Bobby Brady’s fault. And seriously,… am I missing something? Hawaii is a volcanic island, no? Been erupting since like Tommy Vitor would say, ” dude, like over 200 years ! “…

It’s like a bunch of news about Tornado damage in Kansas. Uh…. yeah… happens every years since the Rockies rose up..

I hate myself for this, but don’t you mean Peter Brady’s fault?

On Big island a few years back… Cruise’n and listening to Jimmy Buffet’s song “Volcano”. Yep…. Quick way to get back to the Yukon Territory.

Hawaii… lava or leave it.

I was perusing googled stuff on the volcano and one headline read as “Hawaii volcano: lava splatters from new fissure after Trump” and before I could scroll down, my first thought was that the MSM is actually blaming Trump for the eruptions, but then the rest of the headline read as “declares major disaster in wake of eruption.”

But really, how sad that I have been so bombarded by the MSM over the evils of Trump that I immediately went there. It wouldn’t surprise me though if it were to be revealed that SJWs have been employed to find a possible connection.

There is hope. I just read tonight that kimmel says poking fun at Trump is not funny anymore. It never was except for IQ challenged audience. Maybe there will be a sea change and people will start to see what he is doing instead of just reading his tweets.

I have seen major eruptions. These will be terrifying to those who have not, with lava erupting 1,500 feet up and the base more than a quarter mile in width. However the trick is simple. Don’t be there. Our “explosions” are relatively foreseeable and do not involve plasmatic waves.

If the volcano blows is there any risk of Hawaii tipping over?