Shake and Bake: Hawaii’s Kilauea erupts in the midst of earthquake swarms

Shake and Bake: Hawaii’s Kilauea erupts in the midst of earthquake swarms

This time a Hawaii emergency is for real. 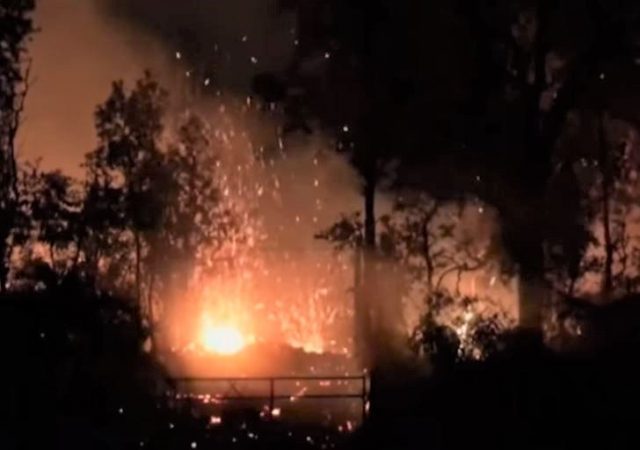 The last time we visited the island state of Hawaii, the state was dealing with the aftermath of a fake ballistic missile warning issued by one of its emergency management employees.

Now, there is a real one.

Sizeable earthquakes have hit Hawaii’s Big Island, likely triggered by the eruption of the state’s Kilauea volcano . The U.S. Geological Survey (USGS) reported that a 6.9-magnitude earthquake struck the island, which was proceeded by a 5.4-magnitude shaker.

The 5.4-magnitude quake was felt across the Big Island from Hilo to Kona and as far away as Oahu. It added to an already busy day for the Big Island, which is grappling with five separate eruptions from two fissures on the volcano, CBS Honolulu affiliate KGMB-TV reports.

The Pacific Tsunami Warning Center said the second quake wasn’t strong enough to cause a tsunami, and Hawaii’s Department of Transportation said no damage had been reported to roads.

The earthquakes are the result of the movement of magma through the volcano’s chambers. This particular eruption cycle began Thursday, when there were a series of smaller earthquakes and a crack opened up, filling with lava that flowed onto the neighboring forest.

The activity continued Friday, with reports of lava spurting from volcanic vents on two streets. Areas downhill from the vents were at risk of being covered up.

The community of Leilani Estates near the town of Pahoa on the Big Island appeared to be in the greatest danger. Authorities also ordered an evacuation of Lanipuna Gardens, a smaller, more rural subdivision directly to the east. But scientists said new vents could form, and it was impossible to know where.

Civil defense officials cautioned the public about high levels of sulfur dioxide near the volcano and urged vulnerable people to leave immediately. Exposure to the gas can cause irritation or burns, sore throats, runny noses, burning eyes and coughing.

The eruption has now forced the mandatory evacuation of the eastern side of the Big Island.  The activity has also opened up six new fissures in the region, closing Hawaii Volcanoes National Park until further notice. More outbreaks of lava are expected.

“These cracks are part of the reason why we decided to close. You don’t normally see cracks around here near the Jaggar Museum where we are right now. These are a result of that increased seismic activity that you saw today,” [Jessica Ferracane, Hawaii Volcanoes National Park public affairs specialist] said. “As that magma source is moving into the East Rift Zone, that’s leaving the southwest part of the crater to settle into that… so these cracks have opened up that you saw earlier. There’s no telling if there’s lava or magma in them, but they’re just a settling reaction to that movement out into the northeast.”

Kīlauea has been erupting nearly continuously since 1983, with considerable property damage associated with some of the lava flows. The geologic feature is the result of the island being on a “hot spot”, which is a thermal plume shooting up from the Earth’s depths. The Big Island is not in any danger of a Mt. St. Helen’s style eruption, as the Kilauea’s lavas are made of a more metal-rich, basaltic lava and tend to flow instead of explode.

However, 2 homes have already been destroyed by the lava flows.

Harry Kim, the mayor of Hawaii County, confirmed the destroyed homes this morning.

“It is more than just a loss of a home,” Kim said at a news conference today.

At least 1,800 people were ordered to evacuate the area near the volcano. Kim said today that all eruptions so far have been concentrated in the southern area.

Some reports from social media:

Incredible video shows ongoing eruptions from Mount Kilauea in Hawaii causing the earth to split, and fountains of lava shoot into the air on a street in Leilani Estates. https://t.co/WA4GQJx14G pic.twitter.com/X3OWDfkXaZ

Our thoughts and prayers are going out to the people of the Big Island.

Waiting to hear that this is due to man-made global warming.

There are no ‘Mandatory Evacuations’ in America despite how many newsies and bureaucrats tell you otherwise.

Back in the 50’s and 60’s Kilauea really put on shows. Like lava fountains that sprayed up 1000 feet and a cascade of lava over a cliff that equaled Niagara Falls.

I suppose this, too, is PDT’s fault?

is there any danger the island might flip over?

asking for a certain Congressman… 😎

Walking out to that spot where the lava shoots out the tube into the ocean really needs to be on everyone’s bucket list. And wear old sneakers cause you really don’t want to melt new ones.

There is nothing like an active volcano or tsunami to reinforce one’s insignificance in the universe.

When I see these pictures and events like this, I think about Pompeii and how people were frozen in time, so to speak, where it happened so quickly that so many were caught in the city.

I’m not belittling this eruption, it took property away and produced a significant earthquake, but I believe other eruptions have been more vast and explosive than this one.

The homes that are near the volcano, my first thought is why would you live there? Mt. St. Helen’s – another such area, these will go off at some time as they are weak spots in the earth’s crust.

I feel for the people affected from this, it has to be horrible to see your home and your neighborhood be devastated by such an event. Lava has always fascinated me, yet caused concern as it is rock that is so hot it is melted… imagine the heat of that just being near by, let alone what it does in it’s wake.

My nephew owns a home, to which he was officially retiring this month, 1-2 blocks from the big fissure that opened up. It is on slightly higher ground than the fissure and from recent reports is still standing despite the subsequent earthquake. This is a long way from being over, I’m afraid, but his place may be spared despite its proximity to the danger. The timing for him was just crazy and if his home does survive, it may be months before he can even gain access again.

I live in sight of St Helens and have climbed it several times. I suggest the book “Volcano Cowboys” which describes the rapid growth in volcano science in 1980. If ever there was a time to be a geologist. The mistake of St Helens was not accounting for erosion removing volcanic sediments from recent eruptions. They grossly underestimated the blast and flow radius effects. And for an unknown reason, the guy who knew the most about the mountain was kept in the Vancouver office, only venturing up a week before it blew when the roads cleared. He was stunned at how big the bulge was, as no other scientists, all from from the HI office, had seen St Helens before the growth, and immediately drove the other way as fast as possible. Fortunately the mountain blew to the NE which is very sparsely populated. Had it been towards Vancouver and Portland, the numbers would have been very different. I live here because it is beautiful. Now, why anyone lives where they get hurricanes and tornados EVERY YEAR is totally beyond me. 😉 I figure a 1 in 10 chance Cascadia will shift in my lifetime. Still better odds than living in Balmer. And with a little luck, Cascadia will differentially impact the parasitic liberals, thus making PDX even nicer.

As I mentioned earlier, feeling the heat off of fresh lava puts a significance in everything.