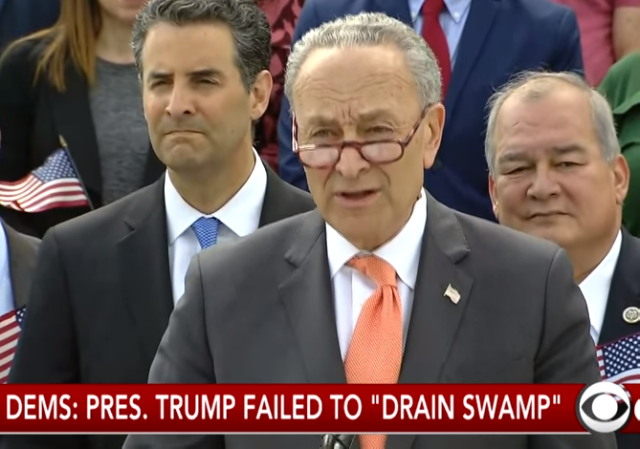 Democrats have been looking for a message for the 2018 midterms and they finally found one they like. Here’s the funny part. It’s one of Trump’s core talking points.

Democrats Roll Out Anti-Corruption Message for 2018

As part of their midterm pitch to voters, congressional Democrats are unveiling a series of policy proposals Monday aimed at cleaning up a “culture of corruption” in Washington.

In other words: Drain the swamp.

The party says it isn’t stealing the slogan and sentiment that helped propel Donald Trump to the White House. Instead, Democrats are returning to an anti-corruption message that helped win back the House of Representatives in 2006 against the backdrop of scandals involving lobbyist Jack Abramoff and lawmakers Tom DeLay and Mark Foley. A decade later, Trump seized on a similar theme, directing voter ire at Democratic nominee Hillary Clinton along with lawmakers of both parties in the nation’s capital. And now, with Michael Cohen, Scott Pruitt and others in Trump’s orbit under scrutiny, Democrats believe they have a compelling case to make against the current administration and Republicans in Congress.

“The American people are sick of getting a raw deal from Washington and they’re tired of broken promises to ‘drain the swamp,’” reads a memo from Democratic leaders outlining various government reform proposals. “It’s an endless cycle taken to a completely unprecedented level under President Trump, demonstrating a blatant disregard for the laws and norms in place to prevent public corruption.”

That’s rich. Democrats block everything Trump tries to do, then turn around and blame him for failing to keep his promises to the American people. Fun game.

This video report from CBS News says Democrats have unveiled new proposals to exert greater control over the executive branch. Funny how that never occurred to them when Obama was president.

As bad as this new strategy is, there is other news that should have Democrats in a panic. Their lead on the generic ballot is all but gone.

Brett Samuels reports at The Hill:

Republicans hold a slim lead over Democrats in a generic ballot among registered voters, a new Reuters poll found, marking the first time the survey showed the GOP ahead in this election cycle.

The poll showed 38.1 percent of registered voters said they would vote for a Republican candidate if midterm elections were held today, compared to just under 37 percent who said they’d vote for a Democrat.

Say good-bye to the D-advantage in the generic ballot. Our latest Reuters/Ipsos poll shows that registered voters as likely to support Republicans as Democrats. @ReutersPolitics https://t.co/0ZIVVs6Zqc pic.twitter.com/rLIHL7jPRl

Republicans can’t take any of this for granted, but it’s very encouraging.

Gee, maybe they will attack a green, cartoon frog next. They already went after the “Russian bots.”

The ADL && SPLC have been after that ‘frog’ for at least two years now. Always citing ‘Hate Speech / Hate Group’.

The bunch that started the ‘frog’ meme … mostly centrists.

They ( have been / still are ) very critical of ‘Communism / Fascism’. That is what got them designated as a ‘Hate Group’ by the ADL && SPLC.

they just don’t learn that their arms are too short to box with the G*d Emperor.

May McCain outlive Schumer. Even Arlen Specter could not elevate the debased existence of Schumer. The “gentleman from New York” is worthy of a Mussolini retirement from public service.

If they want to “Drain the swap” all they have to do is present their resignations tomorrow.

Problem is, to them it’s not just a swamp, it’s protected wetlands.

notamemberofanyorganizedpolicital in reply to malclave. | May 24, 2018 at 3:27 pm

The people who stole the nomination from Bernie Sanders expect their base to swallow this? Which are the stupid ones? The out of touch politicians or the socialist base?

Unfortunately, the bulk of their base are morons.

their base does NOT poast, or even lurk, at Ace of Spades HQ.

They literally have no self-defense and no shame. Like the old song, they say their right’s in the Constitution, but if they would leave there would be no pollution. And don’t come back no mo’….

Stupid autocorrect. “Self-defense should have been self-awareness.

Obama successfully ran on this message in 2008.

Also promised a “tax cut for 95% of American families”.

Nice to see that this is still a center-right country – you can tell by the fact that D’s have to pretend to be R’s to win in competitive districts.

Nobody sees through schumer’s b.s. Nobody.

The Democrats should resign if they truly want to drain the swamp.

From the guys who weaponizing CIA and FBI to spy on the Trump campaign and entrap him “for his own protection”.

I’m envisioning a Branco cartoon, a creepy Schumer groping breasts of Lady Liberty: “breast exam for your protection” with a leacherous Comey looking on

Actually, “Drain the Swamp” wasn’t what put Candidate Trump at the head of the mob in 2016.

The magic words were “Build the Wall”.

Let’s see the Party of No New Ideas try to co-opt that.

We should be talking about Hillary’s personal cult of deplorables, a group made up of illegals, welfare queens,Muslims and other low life.

Jeez, who are the “corrupt” people they are talking about? If they really want to clean up the corruption they should resign and go home.