Attorney Peter Gleason had expressed concern that communications regarding the accusers would be exposed in Cohen’s seized records.

I discussed the matter with a retired journalist by the name of Stephen Dunleavy who suggested and offered to discuss the matter with Donald Trump. Mr. Dunleavy did indeed discuss this very matter with Mr. Trump as evidenced by a phone call I received from Attorney Michael Cohen.

During my communications with Mr. Cohen I shared with him certain details of Scheinderman’s vile attacks on these two women.

The extent of Mr. Cohen memorializing any of our communications is unknown. However, these two women’s confidentiality, as victims of a sexual assault, should be superior to that of any unrelated subpoena.

Furthermore, the letter to the Court dated May 9, 2018, raises concerns of what appears to be reckless behavior on the part of Mr. Avenatti, particularly in the event his client should be given leave to intervene.

Based on the foregoing, it is respectfully requested that the Court issue a protective order and seal any and all correspondence that Mr. Cohen may have memorialized regarding our communications which pertain to Mr. Scheinderman’s assault on these two women.

Gleason filed a follow up Memo of Law in which he raised certain concerns about having records regarding the Schneiderman accusers made available to Stephanie Clifford (Stormy Daniels) attorney Michael Avenatti, who in turn responded to the accusations in an Objection to the motion.

On May 24, 2018, the Court ruled and denied the motion for a protective order:

Mr. Gleason has moved for a protective order over purportedly privileged information that Mr. Gleason states he has disclosed to Mr. Cohen “in furtherance of [Mr. Gleason J’s role as an attorney investigating a potential claim and or representing clients.” (ECF No. 51, at 5-6.) Mr. Gleason appears to be arguing that the “common interest” exception to waiver of the attorney-client privilege should apply to those disclosures. However, Mr. Gleason’s submission does not allege facts that meet the test for a finding of “common interest,” which requires that the parties and their respective counsel have decided upon and undertaken a “joint defense effort or strategy.” See Schaeffler v. United States, 806 F.3d 34, 40 (2d Cir. 2015). 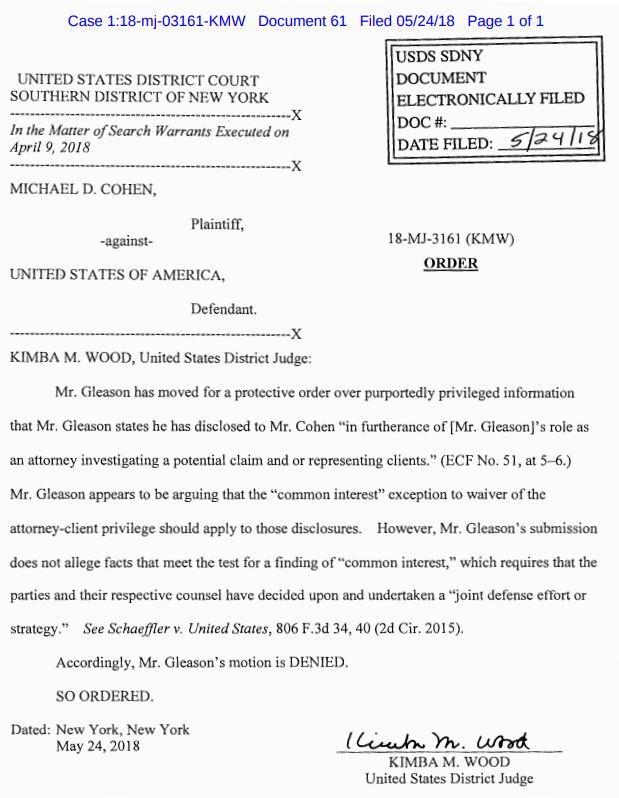 Just another bizarre sideshow in the Michael Cohen court saga.

So long story short, the exception Mr. Gleason sought does not apply because the accusers and Donald Trump are not engaged in a joint defense against a lawsuit, the end. Whatever privilege Trump could claim is no further concern of Mr. Gleason’s. Is that about right?

so much for attorney/client privilege and confidentiality…

/me waiting for ragamuffin to show up and lecture us all

I think there is some gamesmanship going on here. I think that Cohen knew this was not going to work, but it would bring attention to NY Attorney General Eric Schneiderman.

I think the information is damaging to Schneiderman and this is a way to get it out in public.

That’s a nice trick given that Cohen didn’t make the request at all.. not that I’m saying you’re wrong, it’s just that no one asked Cohen his opinion from what I can see.

So let me see if I can get this straight.

Democrats think the fact that a private citizen (Trump in 2013), allegedly had information about Schneiderman and didn’t do…. something…. is actually WORSE than the very fact that Schneiderman was assaulting women.

These people are just batshit.

And what exactly was Trup supposed to do? Report the crimes to Schneiderman? The Obama justice dept?