“causing concern among the medical community” 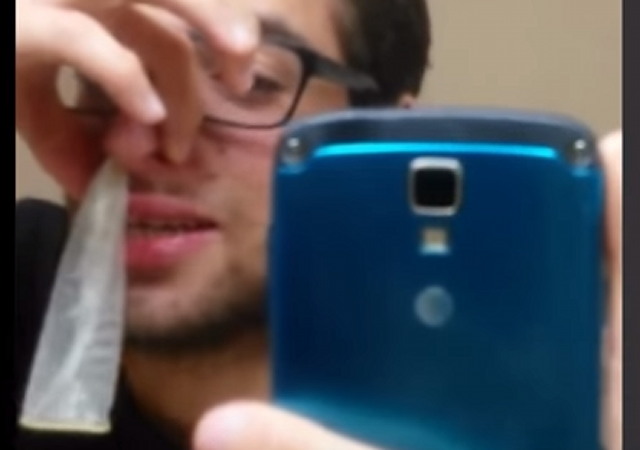 The “Tide Pod Challenge” as it was called, has quickly been eclipsed by another stupid trend called the “condom snorting challenge” which is every bit as dumb as it sounds.

A dangerous trend among teens is causing concern among the medical community. The “condom snorting challenge” is exactly what it sounds like: Teens are taking to the internet to post videos of themselves snorting a condom up one nostril and inhaling until it — hopefully — re-emerges into the mouth.

The potentially life-threatening practice dates back a few years but has resurfaced in recent days.

Unsurprisingly, doctors and school officials are speaking out against the dangerous party trick and urging teens not to partake.

The biggest health risk the challenge poses, experts say, is that it’s a choking hazard.

In addition to choking, Dr. Robert Glatter, an emergency physician at Lenox Hill Hospital in New York City, says inhalation of a condom can lead to infection — and it could even get stuck.

This short video from FOX News shows people carrying out the act:

Remember a few weeks ago when people on the left were arguing for lowering the voting age? Good times.

These trends are driven in part by social media and the desire for attention. Professor Glenn Reynolds of Instapundit has just written a new column on the subject for USA Today:

Social media firms want us addicted to approval. So much for WiFi making us smarter.

Almost all Americans own a smartphone or a computer.
Each device contains the library of Alexandria.
The sum total of all world knowledge.
You can learn anything. Why don’t you?
Too busy tracking social status.
Too enthralled by imagery your evolution can’t resist.

Sadly, this seems about right. Years ago I wrote about how the arrival of pervasive WiFi and smart devices meant that human knowledge was available like never before:

“I’m writing this in a bar right now, and I have most of human knowledge at my fingertips. Okay, it’s not really a bar. It’s a campus pizza place, albeit one with 27 kinds of beer on tap, a nice patio and — most importantly — a free 802.11b ‘Wi-Fi’ wireless Internet hookup. With that, and Google, there’s not much that I can’t find out. If I’m curious about the Hephthalite huns or the rocket equation or how much money Fritz Hollings has gotten from the entertainment industry, I can have it in less time than it takes the barmaid to draw me a beer.“

That was still a novelty back in 2003. Now it’s a commonplace — but people don’t seem to have gotten significantly smarter or better-informed. And social media, designed to exploit our evolutionary weaknesses, probably do play a role.

One has to wonder what “challenges” the internet holds in store for the future.

Neither do I, but I just looked it up on the internet.

After snorting it, I would hope that condom is considered “used.”

Better then using it then snorting it.

But by all means, let’s put this generation in front of a camera to glean their deep thoughts about public policy and Constitutional issues.

Oh yeah.
Let’s put them in charge of making all the important decisions.
Let’s enact whatever laws they come up with.
Let’s repeal the 2nd Amendment and confiscate all firearms at their request.
They are the future after all, aren’t they?

(Quietly sobs in front of the keyboard.)

I think I am getting old.

Just Darwin cleansing the gene pool. Nothing to see here.

Snorting the condom WHILE ingesting a Tide Pod.

Saaaay, let’s give them the VOTE, too!

Wonder if the Heimlich would help expel the condom stuck in their trachea? Maybe inflate it and we could make a balloon animal? Keep by his bed in the ICU…

No wonder they call it School Daze…

OK, youth have gotten even stupider over time. And apparently have no idea what a condom is for…

Judging from what allegedly goes on in elementary schools, they are to be placed on bananas.

I’ve done some dumb things in my life, but I just can’t compete with this idiocy.

“You don’t get to be old by being no fool. A lotta young wise men deader than a motherf**cker.”

We’ve gone from greatest generation to generation tide pod in less than a hundred years. I can’t wait to see what the next generation has in store.

My wife and I (USAF, USN vets) would agree that it’s been a short crawl out from the tide pool to the Tide pod…