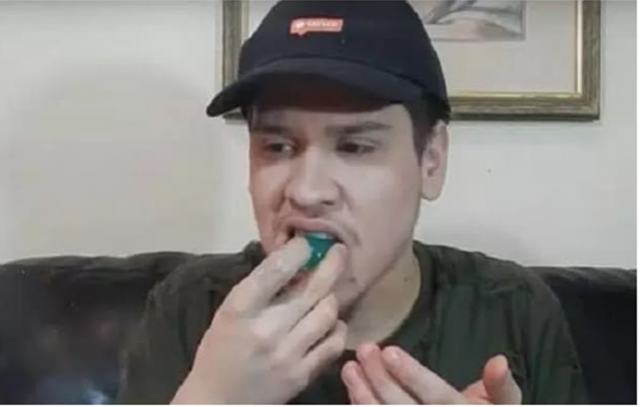 Health experts are sounding alarms about a disturbing the “Tide Pod Challenge.”

The challenge is suppose to be a gag that involves teenagers eating detergent capsules and posting the videos on YouTube. However, the chemicals comprising the pods can cause serious health effects and may be fatal in high doses.

…[V]ideos circulating on social media are showing kids biting into brightly colored liquid laundry detergent packets. Or cooking them in frying pans, then chewing them up before spewing the soap from their mouths.

“A lot of people were just saying how stupid I was or how — why would I be willing to do that?” 19-year-old Marc Pagan, who said he was dared to do it, told CBS News this week. “No one should be putting anything like that in their mouths, you know?”

Some of the videos scored more than 100,000 hits before being removed by YouTube.

There has been a spike in the number of cases of detergent pod ingestion in the first two weeks of 2018 reported to the American Association of Poison Control Centers (AAPCC).

Health officials have warned the capsules contain “highly concentrated toxic contents” which can cause vomiting, diarrhea and in worst case scenarios, breathing difficulties.

“Teens trying to be funny are now putting themselves in danger by ingesting this poisonous substance,” Ann Marie Buerkle, from the US Consumer Product Safety Commission, told Good Morning America.

The chemicals in the pods can irritate tissues and will cause problems in the liver and kidneys as the body tries to remove the material. A good portion of the detergent formulations are salts, which can alter the electrolyte balance significantly if ingested in large quantities, with potentially deadly consequences.

In 2017, poison control centers in the U.S. received more than 10,000 reports of children under age 5 being exposed to the pods. Detergent manufacturers have been striving to make them less “candy like” in appearance to reduce the potential for accidental ingestion.

“The laundry pods have some pretty strong chemicals in them,” [Dr. Marcel Casavant, the division chief of toxicology at Nationwide Children’s Hospital] told Live Science. These chemicals can cause destructive burns to the esophagus or to the airway, which can lead to serious breathing problems, Casavant said. There have also been reports of adults with dementia who died after eating laundry pods, he added.

In 2013, Procter & Gamble, which makes Tide Pods, began packing the pods in opaque containers (as opposed to see-through containers), and later in the year, the company introduced child-proof latches to the containers.

“Our laundry [pods] are a highly concentrated detergent meant to clean clothes … They should not be played with, whatever the circumstance is, even if meant as a joke,” Tide representatives said in a statement to USA Today.

In the event of accidental ingestion, or stupid teens, call poison control at 1-800-222-1222 to get medical advice.

It used to be “how many teens could you fit in a phone booth,” but they got rid of those. Coupled with an overprotective, smothering society, I don’t see this as the end of the world.

Darwin says it is Trump’s fault.

No – it was jamie lee curtis.

Still to this day, I have great objection to warning labels being required on hair dryers regarding showers. Eating laundry detergent? When I was a child and my mouth got away with me a bar of soap was ground on my back teeth(Irish Spring seems to ring as the most distasteful but I was always thankful that the bricks of lye soap that my great grandmother made were never used). WTF would you eat laundry detergent pods? I see little potential value in people that consume laundry detergent pods. I don’t understand it and somehow I feel natural order should not be interrupted by hand wringers.

Natural selection doing that voodoo it does so well.

“Hey, let’s chew on poison because someone on the internet dared us to!”

So, are they more or less dangerous than eating live goldfish?

Just NOT the way to experience glad tide-ings.

We need a famine.

If you use it, time to stock up. The new, teen-fad safe Tide won’t work as well.

I prefer the Walmart brand of laundry detergent pods…they are much cheaper….And…taste better!!!

Some call it a dangerous stunt.

Some call it natural selection.

Yes, but, what we really want to know is, what is Proctor and Gamble’s liability if a teen gets sick from doing this? Will they be found negligent if they did not explicitly state on the product’s package that it’s not for internal consumption?

Stupid parents, a Marxist education system, and no discipline — we’re producing a nation of idiots. They need to find something more toxic — soap pods won’t cure the problem.