“Clapper most certainly did lie to Congress. He was not indicted. In fact, the statute of limitations ran out not long before he took the job at CNN.” 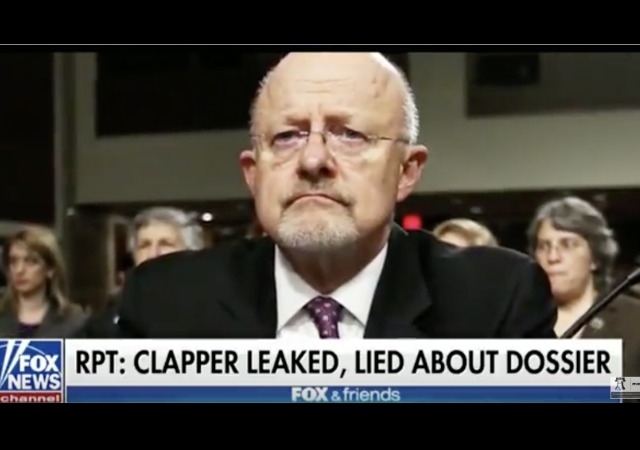 Last Friday, the GOP on the House Intelligence Committee released a report that found no collusion between Russia and President Donald Trump’s campaign. That same report found that former Director of National Intelligence James Clapper leaked information about the dossier authored by Christopher Steele, which is also the force behind the Russian investigation, CNN and may have lied to Congress about it.

Clapper told CNN last month he didn’t leak information about the dossier to the media. George Washington University law professor Jonathan Turley said this is not true and Clapper lied to Congress.

Sean Davis at The Federalist mentioned the findings in the report (emphasis mine):

“Clapper flatly denied ‘discussing[ing] the dossier [compiled by Steele] or any other intelligence related to Russia hacking of the 2016 election with journalists,’” the committee found.

When asked directly whether he had ever discussed the dossier with any journalists, Clapper replied that he had not, according to a transcript of the proceedings:

MR. ROONEY: Did you discuss the dossier or any other intelligence related to Russia hacking of the 2016 election with journalists?

The former DNI later changed his story after he was confronted specifically about his communications with Jake Tapper of CNN.

“Clapper subsequently acknowledged discussing the ‘dossier with CNN journalist Jake Tapper,’ and admitted that he might have spoken with other journalists about the same topic,” the report continued. “Clapper’s discussion with Tapper took place in early January 2017, around the time IC leaders briefed President Obama and President-elect Trump, on ‘the Christopher Steele information,’ a two-page summary of which was ‘enclosed in’ the highly-classified version of the ICA,” or intelligence community assessment.

On March 12, Clapper told CNN’s Don Lemon that he “didn’t have any contact with the media” after he left the government when Trump took office. Lemon then asked, “So you didn’t leak anything about the dossier to the media?” Clapper insisted he did not.

EARLY JANUARY 2017. Trump received briefings on January 6 and had a meeting with former FBI Director James Comey, who told the president-elect that “the Russians allegedly had tapes involving him and prostitutes at the Presidential Suite at the Ritz Carlton in Moscow from about 2013.” You know, the infamous “golden showers” portion of the dossier.

Comey then told Trump that media outlets like CNN and others had the information, but that “it was important that we not give them an excuse to write that the FBI has the material or” something else that is blacked out. He told Trump that the FBI was “keeping it very close-hold.”

CNN reported the meetings with intelligence officials and Comey a few days later and then BuzzFeed published the dossier.

“The Committee assesses that leaks to CNN about the dossier were especially significant, since CNN’s report ‘ that a two-page synopsis of the report was given to President Obama and Trump’ was the proximate cause of BuzzFeed News’ decision to publish the dossier for the first time just a few hours later,” the report stated. “Until that point, the dossier had been ‘circulating among elected official, intelligence agents, and journalists,’ but remained unpublished. As the accompanying article explained, ‘[n]ow BuzzFeed News is publishing the full document so that Americans can make up their own minds about allegations about the president-elect that have circulated at the highest levels of government.”

Turley appeared on Fox & Friends where he told host Bill Kilmeade that Clapper lied. From Mediaite:

“Clapper most certainly did lie to Congress,” Turley agreed. “He was not indicted. In fact, the statute of limitations ran out not long before he took the job at CNN.”

“There’s a serious issue here,” he continued. “Clapper has already admitted that he did speak with CNN. Now, he is insisting that he didn’t speak to any media until January 20th, but he indicated that he spoke to CNN in early January. The key is that that CNN story ran around January 10th.”

“What’s also interesting is that Comey, the former FBI director, said the CNN was looking for a hook in order to run the story of the dossier. He said that to Trump,” Turley explained. “That hook ultimately became that briefing with Comey. But CNN reported that high level people had confirmed this information with them. If one of those individuals is Clapper, then he has a serious problem. He could be accused, again, of perjury.”

CNN hired Clapper as a national security analyst in August 2017, a month after he had his interview with the committee.

Seems to be a lot of that coming out of the FBI and DOJ.

It sounds to me like Clapper will be at home in lying media.

CNN … one of the many “insurance policies” to cushion any slip by a Deep Stater.

Cunningham yesterday posited that Mueller is the ultimate “insurance policy”. The Deep State is so inbred. Even the conflict of interest is conflicted.

Does he still have a security clearance? If so, it should be yanked. There may be other charges related to that that could be explored. Lying to Congress may be only the tip of the iceberg.

I think Jonathan Turley is part of the scheme team, so he should know. I need to find the link to his connection.

If he lied to Congress, I’m sure it was the only time he has not be truthful… amirite? Lying to Congress strikes me as mild compared to the machinations the various people from the Obama regime had running agencies. Comey, Clapper, McCabe, Brennan, Rosenstein, Lynch, Holder… sheesh, if these crooks ever get indicted and convicted the US is going to need to build a new prison just to have room for them all.

Seems that lying to Congress has a short shelf life if it’s already past the time when anything can be done about it.

Lying to Congress is the least of his offenses.

The swamp will go to unbelievable depths to protect the swamp.

Clapper reminds me of another American general who was once considered a “war hero,” about 250 years ago.

What we are seeing is the obama effect on all agencies of our government. obama was a liar and a person who almost never had his facts straight. He called the Constitution a restriction on his form of government and he went around it as much as possible and omitted Congress in the process. Like the previous clinton admin, he corrupted any US agency that could be used against his opponent. We are now witnessing the exposure of these corrupt people that obama surrounded himself with. Susan Rice, Clapper, Brennan, Rhodes, Lynch, Comey, McCabe, Holder, Koskinin, Lerner, and the list goes on. These people not only ignored the Constitution but actively sought to subvert it.

The longer this multi-tier justice system continues to exist the the lower the respect for the law will become among the general population.