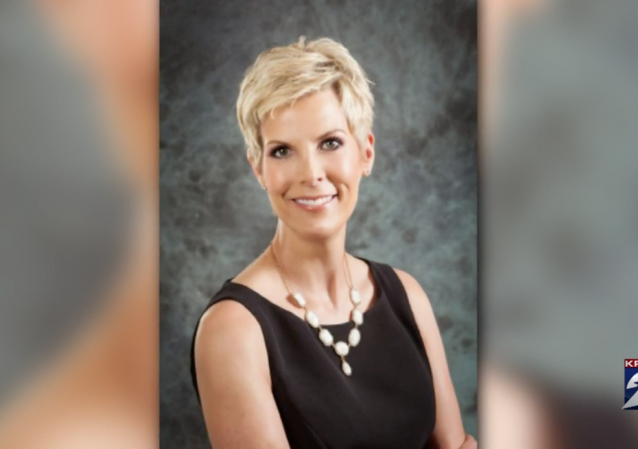 Four teenage girls were standing in line at Tiny’s Milk and Cookies in West University Place, a tiny municipality nestled within the Houston city limits. They were waiting to buy cookies for kids at their church. One of the teenaged-girls was wearing a Trump t-shirt that said, “Make America Great Again.”

While waiting, West U Councilwoman Kellye Burke walked up to them and screamed, “Grab em by the p*ssy girls!” They tried to laugh it off, but Burke kept on.

Again, she screamed expletives at the girls, who were then frightened. Burke then yelled “MAGA!” repeatedly while shaking her fist, according to one of the girl’s fathers, who accompanied them to the bakery.

The girls never responded and left without saying a word, one fearful this woman might hurt her.

None of them were aware Burke was a councilwoman until after the fact.

The families and the girls spoke to local news under the condition of anonymity for fear of retribution.

Burke was charged with a Class C misdemeanor for disorderly conduct. Burke apologized to one family. They accepted her apology.

How sorry is Burke? Read her official statement and judge for yourself:

“I have repeatedly apologized for the bad judgment I used and making the statement I did, but I do not believe repeating the words of the president of the United States is a crime.

However, I will apologize again on behalf of myself, the president of the united states and all the media outlets who repeated his words both electronically and in print.”

The Mayor of West University Place was also forced to respond:

Statement from West University Place Mayor Susan Sample. “Thank you for reaching out about the city’s position on one of its councilmember’s actions last Saturday. The reported comments definitely do not speak for the City of West University Place’s government or employees. My position as Mayor, however, does not afford me any official authority with respect to matters such as this. Neither the city council nor the Mayor has any authority to remove fellow councilmembers.

“I am glad to know that this councilmember, who was independently elected by our city voters, is taking responsibility for her own actions and has reached out to the affected families to apologize for her remarks.

“This incident is a reminder that part of our responsibility, as elected officials, is to set a good example of civil discourse for those we represent, particularly our young people. I hope that my Council colleagues and I will move forward in that spirit in doing the work we were elected to do.”

It’s worth noting Burke is a volunteer for Moms Demand Action.

notamemberofanyorganizedpolicital in reply to RedEchos. | April 6, 2018 at 7:19 pm

Why she’s almost as good as “Zuck Schumer.”

On a side note, why does she look like a Wendy Davis Clone?

What a bitch. She must be a real joy to work with.

Can you imagine if Laura Ingraham (or any conservative woman)yelled at young girls or boys like that?

It would be a 24/7 lynching until her life was destroyed.

That is what this bitchy woman deserves.

Why are these families fearful of retribution? Does this woman have Mafia ties?

notamemberofanyorganizedpolicital in reply to hrhdhd. | April 6, 2018 at 7:35 pm

And cra-cra. But I repeat you…

She needs to serve a week in county lock up. It won’t change her views but it might make some petty city tyrant think twice.

notamemberofanyorganizedpolicital in reply to forksdad. | April 6, 2018 at 7:54 pm

Some brain dead Lefts are awakening however…..

“Lindsay Shephard: Goodbye to the Left

“Lindsay Shephard was that Canadian university TA who was summoned before a Diversity Kangaroo Court to explain why, as part of an issues-in-media class, she had played a debate (which aired on a liberal Canadian tv station) about the use of made-up trans pronouns….

Interestingly, she exposes, accidentally, the syndrome of Default Leftism. Leftists have struggled hard, and achieved great success, at making Leftism the default politics of anyone who actually doesn’t think about politics. She thought she was a leftist, she says, because she cared about being nice to people and rode a bicycle instead of driving a car.

That, in her mind, was “leftist.” And the leftists put a lot of effort into making people think they were leftists or aligned with the left if they merely thought you should be nice to people and also liked trees.

But now she knows what it really is — a totalitarian misery cult…….”

MNCPO in reply to notamemberofanyorganizedpolicital. | April 6, 2018 at 8:07 pm

One very small mind at a time.

tom_swift in reply to notamemberofanyorganizedpolicital. | April 6, 2018 at 9:41 pm

For some ridiculous reason which doubtless makes sense to the carnivorous Left, the SJWs are peeved at her … but that doesn’t make anything better; she’s still an all-around liberal idiot.

Now, if she wasn’t an idiot (and much too young to have actually done anything much, like read) she’d study some Orwell—not lightweight fluff like Animal Farm or 1984, but the more autobiographical material—and get a heads-up on what the Left does to those who only think they’re on the same side.

I think she should have to write Make America Great Again on a chalk board 100 times and where a MAGA shirt for a day.

So I guess she’d be fine with shouting a certain quote from LBJ at a group of black children?

Seems wrong to me.

The woman is a raving lefist loon. 1. Trump spoke the crude euphemism before he was president, as a private citizen. 2. He thought he was saying it in private. He did not shout it at a bunch of teenage girls. 3.Going nuts over a MAGA Tshirt is insane. What this incident tells me is that more of us need to wear MAGA apparel in order to drive leftists over the edge.

“leftist loon” is a redundancy

but I do not believe repeating the words of the president of the United States is a crime.

However, I will apologize again on behalf of myself, the president of the united states and all the media outlets who repeated his words

Oh, so it’s Trump’s fault! Of course! How obvious!

I wonder how many lawyers and media consultants it took to come up with that outrageous spin. But it was worth it—as a blatant non-apology, it probably sets a new standard.

Why does the left ALWAYS get off so easily? Friend of mine From Salem, OR was run off the city council for posting a publicly available video- got accused of racism. Even the Republican mayor (Officially a non partisan role) joined the chorus and ran him off the city council.

Because Republicans are a bunch of whimps as illustrated not only by that mayor, but Ryan, McConnell, etc

To me, this is a blatant case of bullying. Older person, screaming at teens, using profanity on them. . .

And, just because she attended A&M doesn’t make her an Aggie, no more than sleeping in a chicken coop enables you to lay eggs.

Hate driven rant, so she cannot be held accountable, as she is incapable of seeing reality. Of course that should exclude her from office, as she isn’t a functional person with whom you can place trust to execute her duties.

And yes, she is a bully, as are so many on the left when any dare to confront their view of reality.

The criminal conduct is not based on what she said, but the manner she said it and who she said it to.

Show some respect, Burke!
He’s the President of the United States. Doesn’t your office have a grammar-checker, or are you just sneaking in some additional nastiness?

12 years ago, Trump was talking about celebrity gold digger groupies who would let a rich man grab them by the pussy for a chance to marry his bank account. Trump wasn’t talking about women in general, he was talking about whores.
.
But Burke took it personally, so I’ll wager there is something shameful from her past she is over-compensating for.

I’m going to send her a shirt that says:
I traded my ass to a bunch of pervy old white guys
And all I got was Councilwoman.

No wonder she’s pissy – most of her peers got a boob job out if it.

Burke really does not appreciate what she has done. Perhaps if she and her children were treated equally when out in public she would better understand.

This conversation would be seen in a difference light if the councilwoman was yelling at four college aged women. She does not appreciate the inappropriateness of yelling the same taunts at 14 year old girls. Forget the message; her tone of voice was threatening and unhinged.

Almost nobody would defend Trump if he’d said those words to teen age girls in public.

The councilwoman’s excuse is lame. TDS is real.

Since Ms. Councilwoman cool with quoting Trump at Trump supporters, should people quote Obama at her in turn and ask her, did she bring her gun?

West University is my hometown (it was incorporated back when Houston was a tenth of its current size and along with the neighboring town of Bellaire is now completely surrounded by Houston). Our government is officially nonpartisan, but it’s easy to guess this woman’s politics. She is head of Mom’s Demand Action for Texas. She obviously has anger management problems. If she had a weapon she likely would’ve brandished it at these girls. There’s a lot of projection going on with the gun-control crowd.

I just had the dubious pleasure of filling out a CORI form with additional, new online training that accompanies it. This harridan would be, and should be, frog marched out of her job if she were a teacher, substitute or volunteer at a school.

What part of child abuse does she not understand? Her non apology proves that it was merely a pro forma response to avoid adverse publicity, but was laced with the kind of “dog whistles” that liberals are so adept at hearing if a conservative utters them.

I agree: the fear of retribution part was particularly ominous and should be examined. How could a family or families be so afraid of a nondescript councilwoman if she did not already have a reputation for retribution of some sort. Or just being a “boil a rabbit on the stove” psycho?