“If Comey wants the spotlight back on him, we’ll make sure the American people understand why he has no one but himself to blame for his complete lack of credibility.” 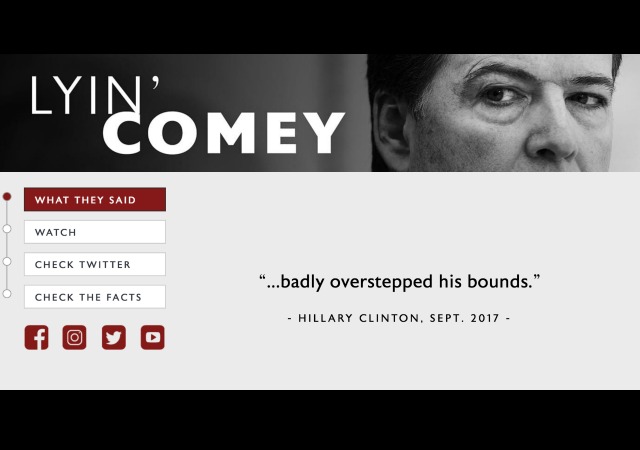 The Republican National Committee published a website that will fact check a book by former FBI James Comey. From Fox News:

The RNC’s new website is www.LyinComey.com, where the GOP plans to fact check Comey’s book and use “rapid response” to highlight any “misstatements” or “contradictions” in it, according to an RNC official.

“James Comey’s publicity tour is a self-serving attempt to make money and rehabilitate his own image,” RNC Chairwoman Ronna McDaniel said. “Comey is a liar and a leaker, and his misconduct led both Republicans and Democrats to call for his firing. If Comey wants the spotlight back on him, we’ll make sure the American people understand why he has no one but himself to blame for his complete lack of credibility.”

Right now, the website prominently features quotes from Democrats about losing trust with him and how he had no credibility, including one from failed Democrat presidential candidate Hillary Clinton. 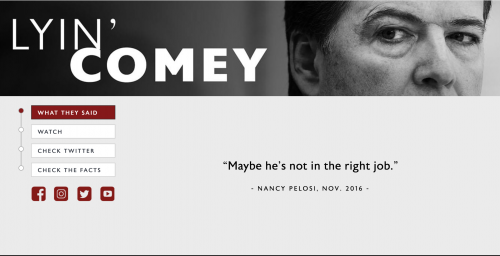 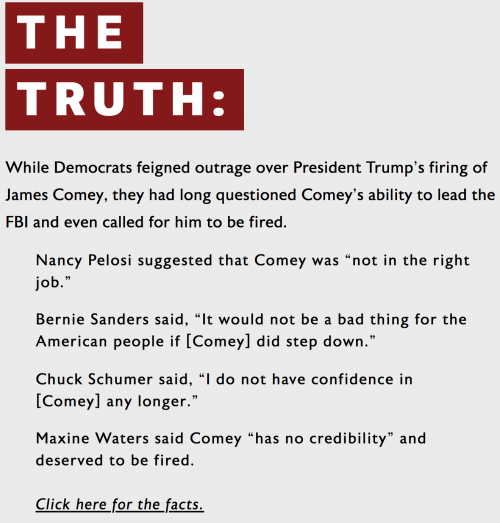 The link takes you to a page on the GOP website that lists numerous times Democrats criticized Comey. Of course, it includes excerpts from Hillary’s book, What Happened. Don’t forget, she placed some blame on Comey for losing to Trump:

Democratic Presidential Candidate Hillary Clinton Wrote In Her Book That Comey Had Badly Overstepped His Bounds. “‘My first instinct was that my campaign should hit back and explain that Mr. Comey had badly overstepped his bounds,’ she wrote in the book, her attempt to make sense of her electoral defeat by Donald J. Trump. But, she said, her campaign advisers talked her out of it, convincing her that it was better ‘to just let it go and try to move on.'” (Mark Landler, “Hillary Clinton, In Book, Regrets Not Striking Back At James,” The New York Times , 09/07/17)

One fact check goes after Comey’s testimony when he said: “that he never posed as an anonymous source to leak information to the press.” The website includes a news report from CNN about how Comey admitted that he asked a friend “to share the content of the memo with a reporter” because he thought it would force an appointment of a special counsel.

Comey’s book, A Higher Loyalty: Truth, Lies, and Leadership comes out on April 17. He will promote his book first on ABC News with George Stephanopoulos in a pre-recorded interview. An excerpt shows Comey calling Trump a “mob boss.”

After that appearance, Comey will attend a CNN town hall moderated by Anderson Cooper. Then he will speak with Bret Baier at Fox News.

okay, who put someone intelligent in charge of the RNC?

after all: they aren’t called “The Party of Stupid” for nothing… 😉

Yup, definitely twitched the old SurpriseMeter. How on earth did the Stupid Party manage to get this right?

And could they do this sort of thing more often?

notamemberofanyorganizedpolicital in reply to stevewhitemd. | April 12, 2018 at 9:08 pm

Have you seen this deserved bit of funning?

The one question he needs to answer is how long after the inauguration would he have survived a Hillary presidency? My money was on less than 5 minutes.

In January 2017, the only human being in the Washington DC area who did not want James Comey fired was James Comey.

Amazing how fast that changed once he actually lost his job.

Just because he’s currently something of a useful idiot as a Trump tormentor doesn’t mean his name is not still near the top of Hillary’s retribution list. He’s probably smart enough to never sit on another park bench or walk the streets alone late at night, but still…

notamemberofanyorganizedpolicital in reply to Merlin. | April 12, 2018 at 8:26 pm

…cause all Mueller is doing, is pulling the fake news, fake FISA reports, and fake masks off of the Clintons (MSM and DNC)evil.

“Dershowitz and DiGenova on Mueller Investigation.”

You had me at ‘failed Democrat presidential candidate Hillary Clinton.’ Lol

The Stupid Party realizes that the party’s job is to do things individual candidates can’t, either scope and scale, or It Must Be Done, but whoever does it becomes unelecatable?

Naah. Even a broken clock is right from time to time.

(Hiding, with the rest of the GOPe rats.)

McConnell And Chao: As Corrupt As The Clintons:

Thankfully I no long consider myself a republican.

When I think of all that Comey has put into motion, his corrupted manner of deciding Hillary’s case before the investigation was completed, his corruption in the leaks, the lies, it just shows how bad our government has become. It isn’t the rank and file, though there are those who matched up to corruption of Comey, it is the leadership at the top which sets the stage for everything. Now the FBI is not trusted. The DOJ isn’t trusted. A lot of that lands at Comey’s dirty feet.

Mueller is right there with his comrade Comey too. As is Rosenstein.

We are in a Constitutional Crisis because of Comey’s direct actions to get this phony investigation going because he was butt hurt that his dirty plays were starting to come out.