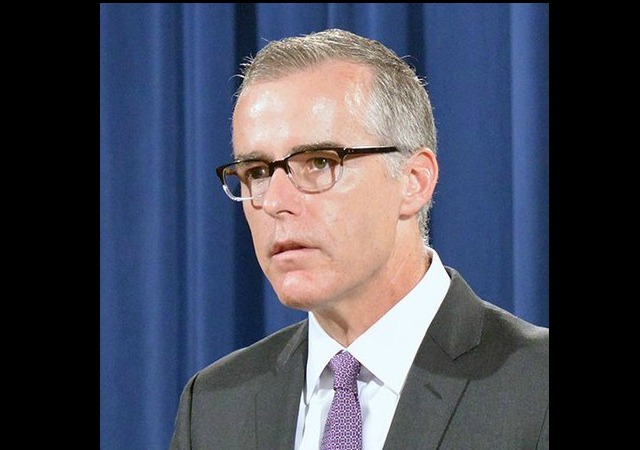 CNN has reported that the Department of Justice’s inspector general sent a criminal referral of former FBI Deputy Director Andrew McCabe to the US attorneys office in DC.

Last week, the IG office published its report on McCabe revealing that McCabe authorized a leak to The Wall Street Journal in an attempt to boost himself, but lied to investigators and former FBI Director James Comey.

*This is a breaking story. Will update accordingly.

No one from McCabe’s camp, the DOJ, or the US attorney’s office has supplied a comment. They all declined to provide one to CNN.

We don’t know if the attorney’s office responded to the referral or if they are conducting their own investigation. A referral does not guarantee the person involved will be charged with anything.

“Lack of candor.” Is that another way of saying he lied? this should be fun.

I think the FBI rules are:

“Lack of Candor” = name for what FBI Agents do they ‘lie’ to each other…see “Permissible Office Jocularity”.

Martha Stewart and others might get some small satisfaction seeing this.
The question is, will he be charged or convicted of a charge as have many other (non-FBI) people?

He will not be charged

This is just more Kabuki theater.

The left is already going ballistic. The main headline is all about his pension. Frankly it should have been pulled the day he was fired.

2) freedom from prejudice or malice : fairness

Nothing about truth or honesty. Isn’t that exactly like the guvmnt elite, to use a word like “candid” which is loaded with gray and interpretation rather than truth/honesty which is much more specific/accurate/absolute.

You either told the truth or you didn’t. You were forthright or you were evasive. You were open and honest or you weaseled your way around it. Candid my ass.

They use words like candor because lying under oath is a crime and a violation of FBI standards. Every case he ever testified on would be up for grabs.

Now his buddies don’t have to charge him.

WaPoo has reported that “…the referral took place some time ago…”

Buckle up – we could see an indictment imminently (tomorrow afternoon?).

This barely counts as an appetizer.

Hey Cheff!
When are you cooking the big fish?

Trump just pardoned Scooter Libby for his conviction of lying to the FBI in the Valarie Plame investigation. “I don’t know Mr. Libby,” Trump said in a White House statement, “but for years I have heard that he has been treated unfairly. Hopefully, this full pardon will help rectify a very sad portion of his life.” Trump said.

So Trump issues pardons with no knowledge of the background and circumstance. I fear that he may also be doing the same in setting up McCabe to be prosecuted likely with direct orders to Sessions. The really strange thing is that the government has to believe Comey over McCabe to come to this conclusion. If Donald had any reasoning skills, he might exclaim, “Huh.”

Apparently you post comments with no knowledge of the background, circumstances, or the law!

perhaps you should learn how to read and not just spit fake news lies. Trump was referring to the fact he didn’t know Scooter Libby personally, not that he didn’t’t know anything about the case.

Here are the actual remarks (from Vox for God’s sake, which has more honesty than you do – which shows you what a vile disgusting human you are):

In 2015, one of the key witnesses against Mr. Libby recanted her testimony, stating publicly that she believes the prosecutor withheld relevant information from her during interviews that would have altered significantly what she said. The next year, the District of Columbia Court of Appeals unanimously reinstated Mr. Libby to the bar, reauthorizing him to practice law. The Court agreed with the District of Columbia Disciplinary Counsel, who stated that Mr. Libby had presented “credible evidence” in support of his innocence, including evidence that a key prosecution witness had “changed her recollection of the events in question.”

In light of these facts, the President believes Mr. Libby is fully worthy of this pardon. “I don’t know Mr. Libby,” said President Trump, “but for years I have heard that he has been treated unfairly. Hopefully, this full pardon will help rectify a very sad portion of his life.”

Please note the words “In light of these facts” which you omitted from your feeble smear attempt.

When he said, “I don’t know Mr. Libby,” Trump wasn’t claiming to be ignorant of the facts of the case. He was making it clear that the President’s pardon power was not being abused as a “get out of jail free” for his personal buddies.

Things are happening to fast to follow. Giuliani is moving on the horizon.

Claims will be made that this will tear our country apart if they go to trial, yet lack of clarity on them bearing responsibility for what certainly looks like crimes, and their getting away with these acts, are tearing apart the country.

We are supposed to be equal under the law, yet we are not seeing that. If they get off without a trial, or at the very least an investigation as big and loud as the Mueller circus, then it sure looks like they are above the law.

I hope I am pleasantly surprised by indictments coming and trails to commence, but I am not at this point counting on it.

No one expects indictments, because regardless of “party”, if you are one of the UniParty, you are immune from any law. We have decades of experience. If and when he gets off, there is no reason for any of the peasantry to obey any law except at gunpoint, and only if unarmed.

The Beginning of the End.