A True Story of Destruction, Deceit, and Government Corruption 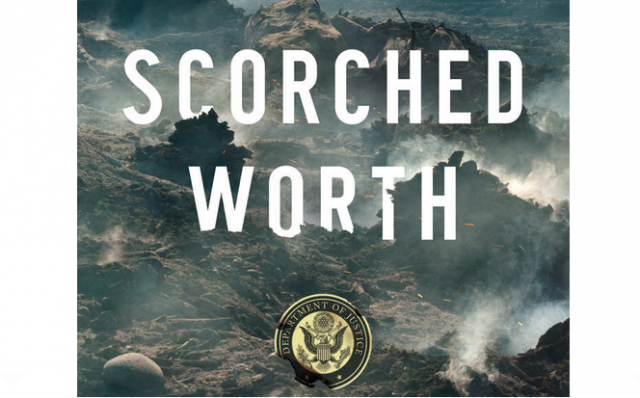 An exceptional new book has come out that features a vastly successful businessman targeted by several government agencies that are in collusion.

In an intriguing twist, the main character is not President Trump. Scorched Worth: A True Story of Destruction, Deceit and Government Corruption, covers the hard fought legal battle between Sierra Pacific Industries (SPI), the second largest lumber producer in the nation, and the California Department of Forestry and Fire Protection (Cal Fire) and the United States Forest Service.

The book’s author is Joel Engel, who has previously written for Legal Insurrection and has penned more than a dozen non-fiction books. Engel’s talent shines in his coverage of the case between SPI and the government agencies, as he takes us on a engaging review of fire science, legal manipulation, and what happens when a successful corporation is targeted unfairly by greedy, power-drunk bureaucrats. The man at the center of the saga is Red Emmerson, who founded SPI.

In 2009, the US Justice Department’s Eastern District of California filed a lawsuit against SPI (and some minor defendants) for damages related to a 2007 forest fire in California’s Sierra Nevadas that scorched burned about 65,000 acres. The suit was based on an origin-and-cause report filed by Joshua White, an investigator from Cal Fire, that claimed a tractor operated by SPI’s logging subcontractor had struck a rock, generating a spark that ignited surrounding combustible materials to become an inferno.

The state of California wanted about $10 million from SPI, and the federal government was asking for nearly a $1 billion. The excessive amount of damages requested was a big clue that there were problems with the government’s case.

Over the course of nearly three years of their own investigation and legal discovery, SPI’s lawyers “found that White and his counterpart from the United States Forest Service had failed to follow established investigative protocols, fabricated inculpatory evidence, hid exculpatory evidence, invented both a false theory of the fire and a false ignition point for the fire, lied under oath, and intentionally disregarded the possible involvement of a young man named Ryan Bauer, who started volunteering unsolicited alibis and statements which turned out to be contradicted by facts and subsequent statements.”

However, the extent of the corruption was not fully uncovered until SPI had turned over 22,500 acres of California forest paid $50 million in a negotiated settlement of the federal lawsuit. And while a California Superior Court Judge Leslie Nichols dismissed the state lawsuit in 2013, and ordered Cal Fire to pay the defendants the largest discovery sanction ever ordered to be paid by a government agency ($32 million), SPI had still taken a fiscal and public relations hit.

Engel deftly organizes the chapters so that readers get a feel for the people behind the story. Emmerson, SPI’s founder, has an incredible background story, essentially building a lumber empire with nothing more than his own two hands and an intense, personal drive to succeed. I found myself getting emotionally invested in the outcome of the court cases.

For those of you interested, here is some background on SPI:

Being a Californian, I also enjoyed the background on how forest fire investigations are conducted. Engel presents the fire science information exceptionally well, which is an essential element to the legal wrangling that is also engrossing.

If Hollywood’s producers were smart, one of them would make Scorched Worth into a mini-series: It has memorable characters, wonderful background stories, intense legal drama, and vindication for the underdogs. However, because the “good guys” in this tale are corporate lawyers and a lumber giant and the “bad guys” are forestry bureaucrats, I doubt a film version will ever be made.

I recommend buying a copy via our Amazon link! The book gets 5 stars from me. If you like true crime stories and tales of regular Americans overcoming enormous challenges, Scorched Worth is worth having in your library.

He “did build that” and government bureaucrats tried to destroy it.

Could you review and edit this paragraph, particularly the first sentence, for clarity?

Did SPI enter a settlement, discover fraud, and then succeed in a reversal of the settlement?

However, the extent of the corruption was not fully uncovered until SPI had turned over 22,500 acres of California forest paid $50 million. And while a California Superior Court Judge Leslie Nichols dismissed the state lawsuit in 2013, and ordered Cal Fire to pay the defendants the largest discovery sanction ever ordered to be paid by a government agency ($32 million), SPI had still taken a fiscal and public relations hit.

The link isn’t working. Here’s another link to Amazon’s listing:

USFS has had some real hum-dingers of bad decisions over far more than just the last eight years. Forcing firefighting in areas where needle litter is building up until a drought year takes all that tinder and sends it up in a whoosh, leaving areas ravaged by bark beetles untouched until they’re dry as tinder and whoosh (again), and of course the inevitable crushing fines imposed on people snowmobiling who get lost and accidentally wander into the wrong unmarked section of forest.

Government does a lot of things that are just plain wrong.

not many outside the Chinese community knew about Abacus until it became the only US bank ever indicted for mortgage fraud in the 2008 financial crisis, and 13 of its employees were handcuffed, chained up and escorted through a hallway in the Manhattan Criminal Courthouse in a staged perp-walk before the national news media in May 2012.

Sung still feels angry as he recalls that episode. “To bring them to court is one thing; to chain them up in handcuffs is another,” he says.

Many journalists and lawyers observed that nothing like that had happened before, not to any other minorities. “I was very much offended,” Sung says. “This is discrimination.”

Looking back, Sung says the Manhattan District Attorney’s office probably wanted to convict Abacus for fraud, as a way to threaten the big banks and fine them more.

Sung says that in banking, reputation is very important; no bank wants to get involved in civil or criminal cases like fraud.

In Chinese idioms, it’s called “to kill a chicken to terrify the monkeys.” In other words, it’s small enough to jail, too big to fail, Sung adds.

Abacus became the only US financial institution to be indicted in the wake of the financial crisis.

The DA’s choice of Abacus itself was odd, as many observers pointed out. With US$300 million in assets, Abacus made only plain-vanilla housing loans requiring downpayments of at least 20 percent.
——————
On June 4, 2015, after several rounds of discussions and delays, the jury finally decided Abacus was not guilty. When Sung read the daily paper the next day, as shown in the documentary film, he almost cried.

Despite the verdict, the case exacted a heavy cost from Sung and his family.

“We lost a lot of business opportunities because of this investigation and trial,” Sung says, “and defending this case cost us about US$10 million.”

Georgfelis, I was red card certified for many years and contract worked wildfires and prescribed fires (we called them controlled burns back then) for USFS, US DOD, and other entities. USFS was most certainly a mixed bag. Your comment was spot-on.

My apologies, but I could never read such a book. It would just hit too close to home. I worked as a contractor for a government agency for 30+ years and the sins I saw from the government and others on a daily basis sickened me. I watched as incompetence was rewarded with promotions, how Affirmative Action was so important that incompetence and bad decisions were rampant, and how I frequently ended up with oversight and even audits of my department and work where I had to teach them (these new overseers actually asked me to do this) the subject, regulations, and so forth. I was even audited once where the auditor asked me to help him write up almost all of the report on his audit of my department.
>
If what all I saw was not bad enough, by brother-in-law worked for the IRS and somehow got on their bad side. He went through utter hell that finally resulted in him filing a lawsuit against the IRS and the federal government. The dishonesty we witnessed during the five year legal ordeal was breathtaking. At the end of it all, with him nearly bankrupt, he won the court battle and the government had to reimburse his every court expense, his lost wages and other actual damages, and had to pay a huge settlement for all the grief and such they made him go through. He has since left Washington DC and is now well off and retired in the MidWest living the dream. And the person who started the entire mess… He got promoted and a cushy new office.