and what is happening 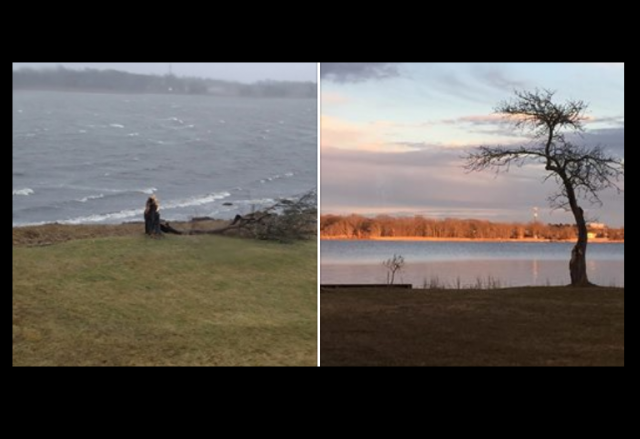 Been off the grid mostly the past few days, without electricity after the Nor’easter that hit the Northeast, but particularly Rhode Island and Southeastern Massachusetts.

Not only did we lose electricity for several days, but we also lost our favorite tree, an old Apple tree at our shore. It had lost a lot of its branches, but it made a great silhouette. We had an arborist trim it to keep it healthy last fall.

But the winds snapped the trunk. 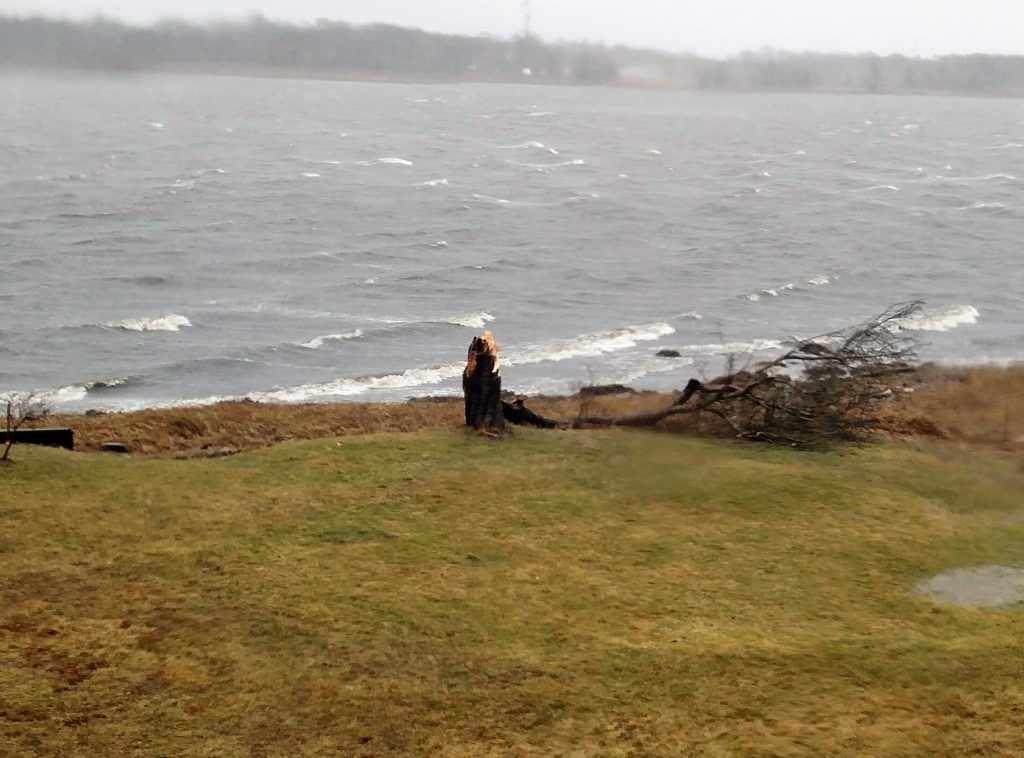 I’ve also never seen such high tides, which came right over and around our existing wood seawall due to the winds. We’re replacing it with a rip-rap seawall in about a month. 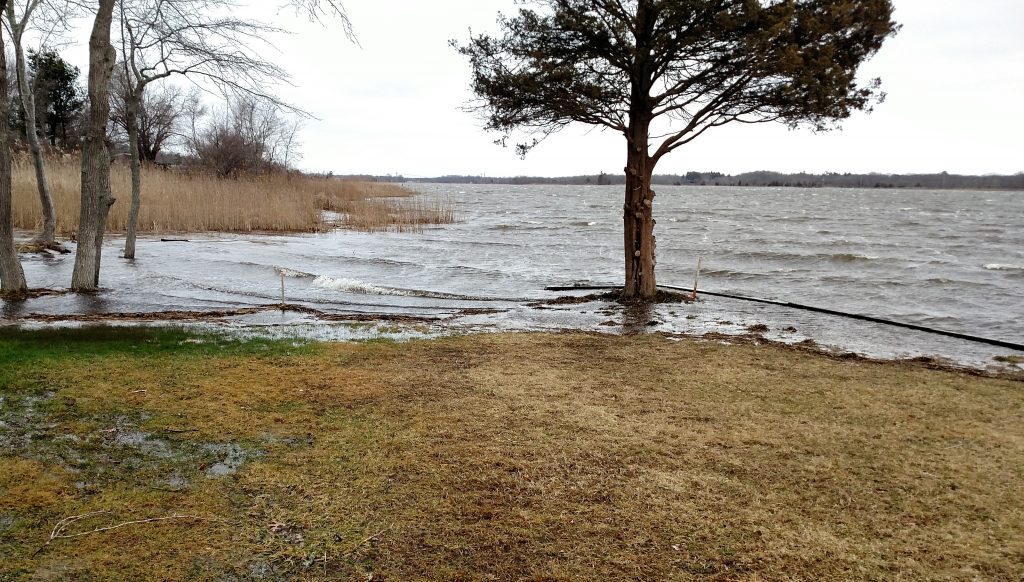 Amidst all that storm stuff, we were getting ready to travel to Cleveland to try to deal with my wife’s continuing and worsening health problems. We’ll be at the Cleveland Clinic most of the month of March. I don’t talk about personal things very much, but the situation is dire. But I can’t and won’t give up hope.

I haven’t been able to follow the political trials and tribulations as much as usual. That’s been a months-long, and now years-long issue.

On the way here, we sat next to a woman on the plane who had this cell phone case: 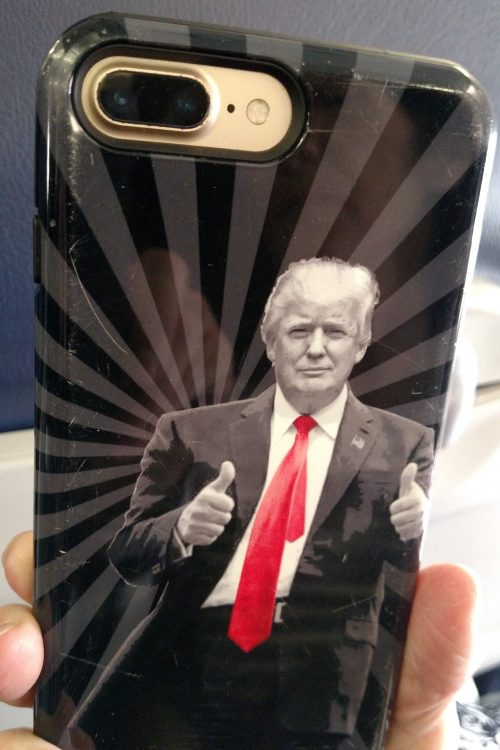 We asked her if anyone gave her a problem about it, and she said no, and if they did, she’d give it right back to them.

So that’s what’s happening to me, and where I’ve been.

Thank you for the post. Best wishes from Arizona.

Best wishes too. Sorry about losing your tree.

If you need a hand, let me know. I’m in NE MA, maybe 120 miles or so from your place. You can get my contact information, back channel.

Hoping the best for you and wifie.
NK

Best wishes to your wife, Cleveland Clinic is the best, I have sent patients there on many occasions.

Prayers for the both of you!

Please know you have our prayers and respect. Most important is hopeful attitude. Makes a tremendous difference.

Praying for you both

May God bless you, your wife, and your children with his best blessings.

My prayers and best wishes go out to you and your wife. I live in Elkhart, Indiana, just a couple of miles off the I-80 Toll Road — about 4 hours from the Cleveland Clinic. If you and your wife wanted, I would be willing to drive there and lay my hands on her and pray for her healing. I am not “Pentecostal” or “Charismatic”, and I have never done anything like this before, but I feel I do have faith for such prayers for healing. The healing would be up to the Lord, of course.

I am serious about the offer — no guarantees the Lord would answer the prayer with a healing, but I have absolute faith He is able and, as far as I know, willing to do so. It could not hurt, and it might help completely.

Anyway, I felt I needed to make this offer, as unusual as it is. God bless and comfort you and your wife, in any case.

Hope things are go well with your wife.

May the answers you hope for be found, in Cleveland or elsewhere. I think it was John Lennon who said, “Life is what happens while you’re busy making other plans” and I’ve always maintained that life is a four letter word for a reason.

Please accept my best wishes for a good outcome. God bless you both.

My thoughts and prayers. Be positive.

Sincere sympathies, and may G-d grant a miracle.

Best wishes. Hoping for the best.

Thoughts and prayers for strength & guidance in your time of need & always.

Nor will we. God give strength to both of you.

I wish you good luck professor. God be with you and your wife.

So sorry to hear about your wife and many prayers for her recovery! Because of you and your website, I am now a proud NRA member. Should have done it years ago.

May the good Lord bless the both of you. God always provides a pat, one that we may not always see, but it is there. Trust in Him. I’ll add both of you to my prayer list.

I pray you and your wife God Speed and that the Cleveland Clinic has the answers your looking for.

Agnostic, but already said a little prayer for you and yours. Maybe He will will listen to someone who tries not to bother Him too much. Either way, you are in my thoughts. Stay strong and carry on.

Thoughts and prayers. God bless you all.

Add my prayers for your wife and you.

I will include your wife, you, and your family in my prayers.

The Lord is good to those whose hope is in him, to the one who seeks him; it is good to wait quietly for the salvation of the Lord. Lamentations 3:25-26

Thank you for letting us know what you and your wife are experiencing right now. You both are most definitely in my prayers. God bless you both!

If you and your wife like good corned beef sandwiches, a trip to Slyman’s in Cleveland will satisfy a longing and lift your spirits. It has wonderful sandwiches in an earthy, lively setting. I discovered it on a trip to Cleveland when my daughter was looking at Case Western Reserve. Best wishes.

Push those doctors and their staff for every tiny thing you can do to support your wife. My family has had several instances where research and pushing by ordinary people related to the ill person has prevailed. It does not happen every time, but it is worth a try.

God bless you, and your medical team’s efforts.

Professor Jacobson, your words have done so much for me in the short time I have been following your blog, but I don’t have the same skill in putting thoughts to paper that you have.

I hope you will be able to take some comfort knowing that so many are praying for you and your wife.

Prof. J;
Thank you for sharing the ordeal(s) you and your wife have trasversed and are enduring.
So many are and will continue to walk this road with you keeping you both in our thoughts and prayers.
Continue to hold Faith and Love close with each other as they are the two strongest prescriptions one can do in the face of adversity.

painful neurological condition
********************
not fibromyalgia is it? or hyperactive and hypersensitive nerves? got both here. real pain…literally

Thank you for sharing your trying circumstances with us. I am sorry. Life is hard sometimes. I have walked that walk (only at Stanford, not Cleveland) and I leaned heavily on God, hope and the prayers of others. God bless you. I will pray for you and your wife.

Your wife comes first. Be as completely with her as you can. We happy few will continue the defense of truth.

I will be praying for you and your family.

My thoughts are with you on this difficult journey.

I will pray for your wife, for you, and for her medical team. May the Lord lead you all to improvement or to that miraculous cure which sometimes does happen.

Lots of thoughts and prayers for Mrs. Jacobson.

I’ve had the good fortune to meet her twice.

She is a lovely, classy, kindhearted lady. The best.

I wish your wife a speedy recovery. I am sorry about your tree.

I don’t have much familiarity with plants for your climate zone, but you might want to check and see if there are any plant nurseries specializing in native species.

If so, ask which trees are fast growing and go from there.

Quite a few species of pine trees are fast growing. I’m not as familiar with the growth rates of most deciduous trees.

Of course, non-natives which come from the same or very similar climate zones are an alternative, too.

But that’s all for after Mrs. Jacobson is better.

Prayers to your wife, you and your family.

My thoughts, prayers, and hopes are with both of you.

My wife just read the comments and was very moved. Thank you all.

I lost my wife a few years ago to a very painful neurological complex of diseases. You may need to keep in mind that there may be more than one thing wrong, with different causes and treatments. In our case, she had Complex Regional Pain Syndrome (CRPS) sometimes called reflex sympathetic dystrophy (RSD) of the abdomen, abdominal migraines, Celiac disease, and, last to be diagnosed, Diffuse Lewy Body Syndrome, a rare combination of Parkinson’s and Lou Gehrig’s diseases. I pray that God grant you both the strength, wisdom, and the black sense of humor you will need along the way. I know of a few good doctors in Manhattan, should you need a recommendation.

I believe RSD is what my little sister suffered from for years. I emailed the Jacobsons to ask the doctors to consider the possibility of RSD being the cause of Mrs. Jacobson’s severe pain.

I’m very sorry for your loss.

I’ve actually had a patient with RSD a few years ago, you are right very uncommon and overlooked.