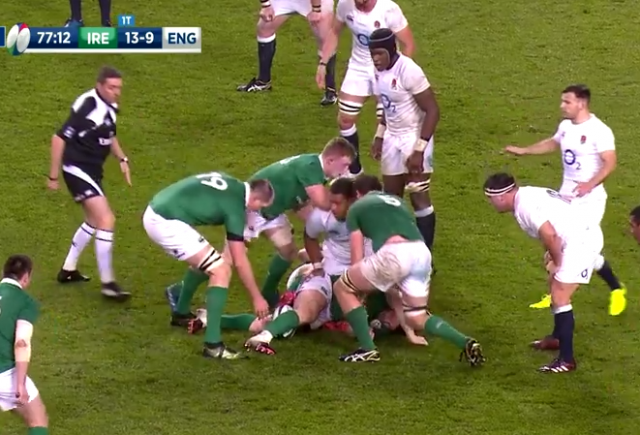 Thank heavens that the Irish aren’t threatened by the cultural appropriation that occurs on March 17th each year.

While Americans don their green shirts, drink their green beer, and listening to great music (check’s Mike’s post for some wonderful songs), I thought it might be a fun idea to focus on the news coming out of Éire.

The big story is that Ireland beat England in rugby, winning a rare Six Nations Grand Slam in a most thrilling 24-15 victory.

This was only the third clean sweep by Ireland since the term Grand Slam came into use 110 years ago.

The Irish won the championship the previous weekend and came to the last-round matchup with the deposed champion as slight favorites, but without having won at the home of rugby in eight years.

The fear factor was broken in a superb first half with three tries for Ireland to lead by 21-5 at halftime.

Speaking of England, exactly how is Ireland faring in the wake of Brexit? An analysis of European Union economic activity shows that countries are organically forming into essentially 3 specific regional groupings.

Where does Ireland fit in?

Northwestern Europe brings together the developed democracies and co-ordinated market capitalisms of Germany, Belgium, Luxembourg, the Netherlands, Denmark, Sweden, Finland and Austria. Southern Europe centres on Italy, Spain, Greece, Portugal, Cyprus and Malta. Central and eastern Europe links the economics and politics of Poland, Hungary, the Czech Republic, Slovakia, Romania and Bulgaria. The Baltic states of Lithuania, Latvia and Estonia aspire to join the first group but share some features with the third, while Slovenia and Croatia straddle this one and the south.

…Going into the economic crisis, Ireland shared many characteristics with the south on debt and bailouts, even though its export-led growth model is more northern. Ireland’s is a liberal market economy like the British and US ones, with competitive market-based institutions, decentralised and unco-ordinated wage-setting, and short-term venture capital, with a university system that promotes general and transferable skills.

Ireland is gravitating to the northwest group in this new European line-up, despite sharing dependency features and the need for transfers with the south. After Brexit we will be culturally, legally and institutionally more alone and vulnerable unless more links and alliances are forged. Corporate taxation and security-defence issues arise to challenge this emergent positioning within a changing EU and these three regions.

Of course, there are those Irish who are not entirely down with the whole “St. Patrick’s Day” concept.

Once a year, everyone wants to be Irish. Every other day, we are a burden. The Good Friday Agreement is a barricade for a hard Brexit; the border question won’t go away; women still have no legal autonomy over their bodies. There is often a considerable reluctance to engage with what are seen as the complexities of Irish and Northern Irish politics and social issues.

Five months ago, I worked on a documentary for the Irish broadcaster, RTÉ. “Brexit: Farming on the Edge” was our attempt to provide a platform for local voices which were being drowned out by a UK-centric focus on Brexit. Most farmers I spoke with described feelings of isolation.

Their concerns weren’t being listened to. Large supermarket chains were considering cancelling their deals with local farmers. The Irish beef industry is the largest of Ireland’s food sectors, with the UK counting for 50 per cent of its trade and the EU 45 per cent, yet for many of the farmers I interviewed, these issues were being glossed over.

This ripple effect may seem parochial to broader Brexit discussions, but for small communities across Ireland who are still largely dependent on the farmer’s cheque book, it is a matter of life or death.

I might suggest to the Irish that they chat with President Trump during his proposed visit to the country next year, as he has had great success in dealing with the American economy. Trump recently met with Irish Taoiseach Leo Varadkar ahead of a 40-minute bilateral meeting between the US and Ireland.

It was my honor to welcome Prime Minister Leo Varadkar of Ireland to the @WhiteHouse! pic.twitter.com/ZT3WnIZR2L

“It’s my great honour to have the very popular Prime Minister of Ireland with us and we’re having some good talks about trade and about military and about cyber, and all of the other things that we are talking about,” Mr Trump said.

“The relationship is outstanding, and only getting better. It really is a special group of people, a tremendous number of Irish are living in New York where I grew up and they’re living in the United States, and these are truly wonderful people.

Irish Alzheimer’s – Forgetting everything except the grudges

You’re an everyday whiner and leftist progressive scold too. 20th-21st century Irish are their own worst enemy. Cocky Irish Marxists are offputting. The throwback Celt-Gaelic-druid song, dance and language crowd are tiresome boors.

I wanna go full-on-Braveheart-with-mace when I hear a phony hippy-celt (with harp tattoo and purple hai) blowing a fife at the local irish pub. Or the next time some local KPFA expert opines on the quality of sound between Irish and Scottish bagpipes?