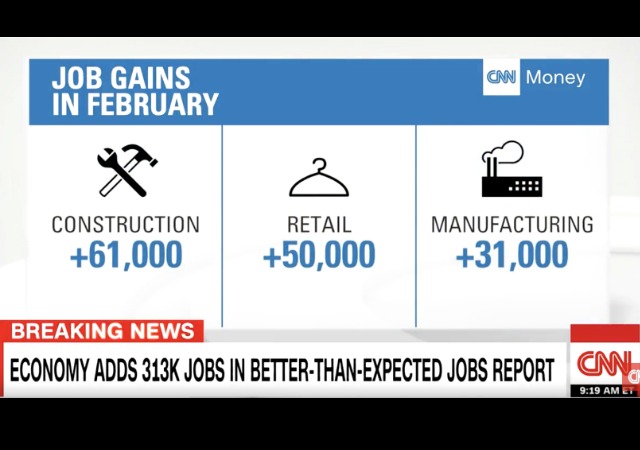 This came as a shock to many! The Labor Department reported that the US economy added 313,000 jobs in February, beating expectations by 100K.

The country has added more than half a million jobs in the first two months of 2018.

Economists predicted around 200,000 jobs for February and a 4% unemployment rate.

The unemployment rate is at 4.1%, which is the lowest since December 2006 and also the same for five straight months.

Construction firms added 61,000 workers, the biggest increase in nearly 11 years for the sector. Hiring also picked up at retailers, manufacturers and local governments, including schools. All levels of government added 26,000 workers, also the best gain since July 2016.

Better hiring was supported by Americans entering the workforce in larger numbers. The share of Americans participating in the labor force rose by 0.3 percentage point to 63.0% in February. 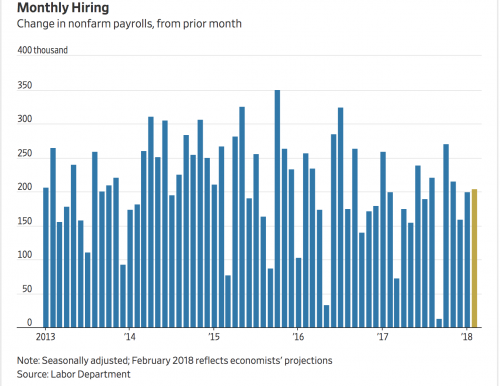 I’ll be interested in the manufacturing numbers in the next few months since President Donald Trump imposed tariffs on aluminum and steel imports. Those types of companies have said the tariffs will help grow their business, which should mean more jobs. The Wall Street Journal noted that these industries have “perked up” and grew faster in the past 12 months:

Jobs in primary metals and fabricated metal products, which include steel production, grew faster than the economy as a whole in the past 12 months, at 3.8% and 3.7%, respectively, creating about 66,400 jobs.

The two rates are faster than the overall job growth rates seen since the last recession, bouncing around 1.0% to 2.0%. The two industries’ growth came in the year leading up to the Trump administration’s push for tariffs on steel and aluminum.

Wage growth went up 0.1%, which was less than expected, but still growth isn’t bad. Quincy Krosby at Prudential Financial said that the job growth and moderated wage growth is “[G]ood news for both sides of the street, Main Street and Wall Street.”

Analysts have also said no one should call this economy a late cycle. These latest jobs reports have told us “that the economy isn’t showing signs it’s nearing a recession as jobs growth remains strong and new participants enter the labor force.” WSJ quoted these analysts:

Neil Dutta, head of economics at Renaissance Macro Research: “Strong growth in payroll employment is not typical if the economy is ‘late-cycle.’ There is still room to run in this labor market recovery.”

David Donabedian, chief investment officer of CIBC Atlantic Trust: “Over the last 2 months, the job market has absorbed 1.3 million new entrants into the labor force, allowing the unemployment rate to stay at 4.1% – a remarkable testament to the underlying strength in this economy. We continue to expect the strongest year of economic growth since 2005.”

David Kelly, the chief global strategist at JPMorgan Asset Management: “The February employment report was positive all round, showing booming job growth and muted wages and a strong economy with still some room to run.”

The Labor Department revised numbers for the past two months. The economy added 175,000 jobs in December and 239,000 in January.

Among the major worker groups, the unemployment rate for Blacks declined to 6.9 percent in February.

Who knew a Republic of Freedom,
and an economy emancipated from Government Leftist, Democrat Party insanity were all Racist?

I refuse to believe this until I get my daily dose of truth from the YellowBellow lurker around here.

This is either fake or a late endowment of Obama’s legacy.

Zero defiantly is the reason for this surge in our economy –
which is to say Zero leaving gave an instantaneous boost to our economy.

Trump had NOTHING to do with this, just ask rags – he will tell you that T-rump is just a fake news POTUS.

I, on the other hand, believe that The Donald is a pure Genius, even if he says so himself 😉

notamemberofanyorganizedpolicital in reply to 4th armored div. | March 9, 2018 at 4:40 pm

Ya’ll both forgot your Giant-sized, Neon SNARK signs there.

Damn Trump, he is taking away all the fun opportunities that unemployment has to offer, like learning a hobby or spending more time at home… as Nancy Pelosi told us when asked about the ever growing unemployment and under employment, and those out of the workforce. How dare he also bring back jobs that Duh One said were never, ever, coming back.

“Labor market recovery” is economist talk for those who analyze sector economic indicators. For those who analyze a tree rather than the forest. The fact is a high labor participation rate is the foremost and most important factor in a healthy economy. While it can be a prelude to some inflation, it is most important for an optimistic citizenry. And Trump seems to be listening to citizens rather than sector economists like the financiers and bankers Bush and Obama heeded.

Remember how bad economic news was always “unexpected” when Obama was in office?

And now it’s good news that is “unexpected.”

“The share of Americans participating in the labor force rose by 0.3 percentage point to 63.0% in February.”

Yep it’s funny how Obama apologists told me for years that LFPR would never rise again, and it didn’t mean anything. It was just boomers retiring and that would always outpace the incoming workforce. Silly liberals, we aren’t Japan (yet)

Yeah, that SOB Trump has made my 401K increase to the point that his Nazi IRS says that I now have to take more money out every month. What can I do with more damned money? I can’t fit into a Honda S2000, all the nudie bars have closed and the doc took me off booze. My wife says I need to find a girlfriend, but one woman can be annoying enough. I knew I should have voted for Hillary.