March for Our Lives Narrative Continues to Unravel: Only 10% Teens

March for Our Lives Narrative Continues to Unravel: Only 10% Teens

Yet the March for Life, “a magnet for college and high school groups,” gets little attention 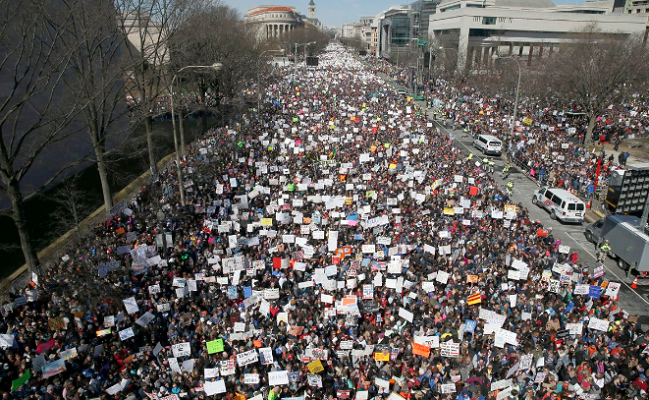 Unsurprisingly, the “Parkland Protesters” were co-opted by the anti-Second Amendment left, and everyone from the media to politicians on both sides of the aisle to former Supreme Court justices has been falling over themselves to support “gun control” in their name.

Last month, Kemberlee blogged about how the “March for Our Lives” had been taken over by a variety of the usual leftist SJW agitators and demagogues.

Noting that Planned Parenthood, Moms Demand Action for Gun Sense in America, Move On, the Women’s March, and the American Federation of Teachers were all involved in promoting, organizing, and funding the march, Kemberlee concludes:

Make no mistake, The March For Our Lives is not spontaneous, nor is it For The Children™ (Planned Parenthood’s involvement says at least that much). Left-wing agitators, social justice warriors, and anti-second amendment folks are in the worst and most literal sense using traumatized kids as tools to garner political capital.

Indeed, as neo-neocon blogged, retired Supreme Court justice John Paul Stevens penned an op-ed citing the “schoolchildren” who engaged in the march as a great reason for “getting rid” of the Second Amendment.

Stevens wrote, “rarely in my lifetime have I seen the type of civic engagement schoolchildren and their supporters demonstrated in Washington and other major cities throughout the country this past Saturday.”

The narrative goes like this:  Schoolchildren are spontaneously and independently rallying to change America’s gun laws; they are going to take action because they can’t count on adults in Congress.  They’re just fed up, as the first student speaker stated at Saturday’s DC rally:  “‘Welcome to the revolution . . . . My generation has spent our entire lives seeing mass shooting after mass shooting,’ and that needs to end now.”

It turns out, however, that only 10% of the March for Our Lives participants were teens.  According to the Washington Post, for those over the age of 18, the average age was 49.

However, the young faces of the advocates have created an assumption that “youth” and “students” are the core of the movement. My research tells a different story about who participated in the March for Our Lives — and it is more complicated and less well-packaged for prime time.

Contrary to what’s been reported in many media accounts, the D.C. March for Our Lives crowd was not primarily made up of teenagers. Only about 10 percent of the participants were under 18. The average age of the adults in the crowd was just under 49 years old, which is older than participants at the other marches I’ve surveyed but similar to the age of the average participant at the Million Moms March in 2000, which was also about gun control.

Interestingly, we do have a movement in the United States in which a far larger percentage of high school and college students engage each year: the March for Life.

The March for Life rally is an annual event that even the progressive Daily Beast acknowledges “has become something of a magnet for college and high school groups.”  This is all-but-ignored by the media and certainly never held up by the left as a reason to overturn Roe v. Wade, let alone repeal a Constitutional amendment.

Crowd size isn’t the narrative, though some media outlets attempted to make it a part of the narrative with outrageous claims about “March for Our Lives” attendance.

According to the leftist anti-Second Amendment crowd, we need to take seriously the demands of teenagers . . . unless the issue is abortion.  As usual, the issue is not “the children,” the issue is forwarding an anti-American agenda and using “the children” as pawns.

Is the Cuban flag on her jacket representative of a Free Cuba or Castro’s Cuba?

One witness said it was the same women who marched twice before.

When will we find out who David Hogg really is?

He is a monster who is having the time of his life living off the dead bodies of murdered students.

I wonder if he is one of the students that reportedly bullied the shooter.

hogg wasn’t at school. he heard about it, got his camera and bike and pedaled to the school.

Wrong. The source for that story retracted it almost immediately.

He was there, hid in a closet with the rest of his class. Later in the evening he biked back with his camera to interview people on the street outside the school.

He was there, hid in a closet with the rest of his class. Later in the evening he biked back with his camera to interview people on the street outside the school.”

Actually, in his own words, D.Hogg disagrees with you:

Was he in the closet, or running with the other students, or at home, or confused or suffering from PTSD? In any case, something doesn’t ring true.

It has been reported that some of the semi-plastic Hollywood types contributed half million dollars to this “cause”. Who did they make out the checks payable to? Where did this money go?

Who Runs March for Our Lives?
Posted by Daniel Greenfield

I’ll note in passing that the reportage relied upon here is from the WaPo.

Giving the lie to one of the prominent nutter narratives here.

Information is where you find it.

Not sure what you mean.

If it’s the age thing, all one has to do is look at a few of the photos available that weren’t pointed at the stage.

I noted the age of the “marchers” with the first pic I saw.

As far as the education of those present, I suspect that’s just WaPos way of telling (lying to) us that those who oppose guns are just smarter than everyone else.

“participants were highly educated; 72 percent had a BA or higher.”

Highly educated? We have them on video calling to ban something they can’t define (assault weapons).

They don’t teach that in your typical BA course.

I wonder if the actually meant BS degrees (pun intended). Education doesn’t equate to intelligence though, as in so many fields, the teaching is garbage… and just like computers, if you program garbage in you get garbage out.

Highly educated does not necessarily equate to highly intelligent.

Especially if their degrees are recent or end in ‘Studies’ or ‘Science’.

He was. CBS muddied the waters by showing a video tape interview out of context. He was at school during the shooting, when they cleared the school he went home to get his camera and came back.

I don’t want to defend the little freaking Nazi, but I want to save you from having to eat crow from some liberal jackass.

I could be wrong but its the usual thing the left liberal media does that they exclude anything that doesn’t fit the narrative and given the haven’t been banging on about this then its reasonable to conclude these kids weren’t near the shootings.

I’m not a fan of the Parkland protesters, but this seems a bit harsh. Annoying and self-inflated as the Hogg kid is, it’s not a shameful act for an unarmed person to hide from an active shooter. In fact, it might be rather wise. The heroes that day were the JROTC who actively sought to help others by shepherding them into rooms and behind kevlar-type material. But I don’t think it’s helpful to insinuate that this kid (he IS a kid, after all) was a coward because he hid from a deranged lunatic who was shooting people on sight. Hiding from mortal danger when one is unarmed and unable to counter an attack is a perfectly natural and human response.

I have pondered how things might have turned out differently if those JROTC members had been armed. From reports, at least four of them would have had the courage and training to neutralize the threat.

And while Hoggboy and a few others are heralded as heroes for standing up to the NRA and have become household names, 99.9% of Americans can’t name a single victim.

Hogg made and posted a quite creepy video, probably with his cell phone, while in that closet during the shooting. He was feeding the other kids lines about their impending death and pro-gun control opinions. My impression of the kefluffle over the CBS report is that Hogg wants to memoryhole this and decided to play up having to get his video camera from home to do interviews. The tide pod eatting Sieg Heiling little fascist was too dumb to realize this would make it sound like he wasn’t at school and the reporter, probably equally clueless and all in for the narrative, didn’t catch it either.

“but this seems a bit harsh”

I’m sorry Fuzzy, I was busy washing the blood of 17 kids off my hands before mailing Rubio a donation in exchange for invites to the next Bloodbath Party. You were saying?

Your comment seems to be sarcastic. What message were you trying to get across?

Virtue signalling is not a good look on you, Fen. To borrow a point from murkyv, can you name even one of those 17 kids whose blood you are washing from your hands?