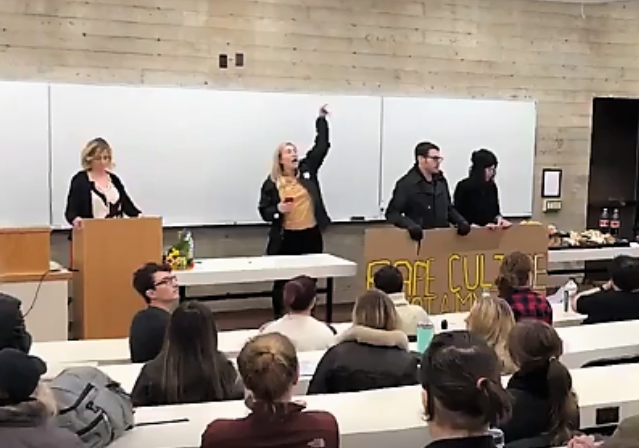 Professor Jacobson wrote about the incident at Lewis and Clark earlier this month. Now some faculty members at the school are standing up for free speech.

It took a few years and repeated student disruptions of a contrarian feminist’s speech, but Lewis and Clark College is seriously considering a free-speech statement in line with the University of Chicago’s pioneering statement.

The Pioneer Log reports that 13 professors across departments have signed the resolution, and it will “move into the adoption process” in two weeks.

Similar to the UChicago statement, this version says the Portland college must “guarantee all members of the Lewis and Clark community the broadest possible latitude to speak, write, listen, challenge, and learn”:

[I]t is not the proper role of the institution itself to attempt to shield individuals from ideas and opinions they find unwelcome, disagreeable, or even deeply offensive. …

Although members of this community are free to criticize and contest the views expressed on campus, and to criticize and contest speakers who are invited to express their views on campus, they may not obstruct or otherwise interfere with the freedom of others either to express or to hear views they reject or even loathe. To this end, Lewis and Clark College has a solemn responsibility not only to promote a lively and fearless freedom of debate and deliberation, but also to protect that freedom when others attempt to restrict it.

The School and Administration have to be willing to discipline those “Special Snowflakes” who can’t sit politely while the other side talks.

I’ll take it seriously when the school adopts a policy which involves turning fire hoses on the little darlings when they go all brownshirt.

This. Talk is cheap. Once they start expelling and criminally charging students who commit vandalism or violence at these events, then I’ll believe they’re serious.