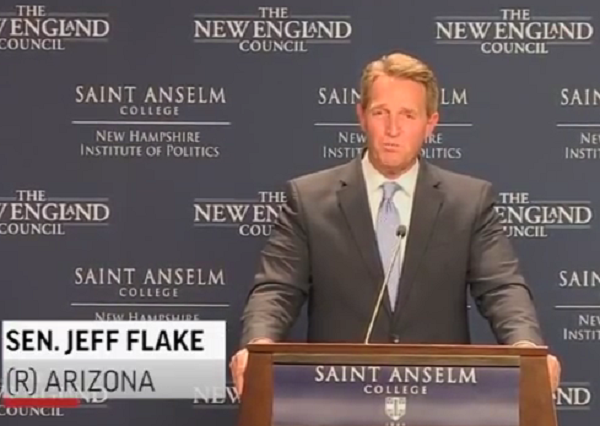 Senator Jeff Flake (R-AZ), referring to himself as “Americanus NeverTrumpus. Subgenus: RINO,” told an audience in New Hampshire that he wants to see a GOP primary challenge to President Trump in 2020.

Not ruling himself out as a potential challenger, Flake also floated the idea of running for president as an Independent in 2020.

Sen. Jeff Flake, R-Ariz., introduced himself to the influential Granite State as a conservative in the tradition of Ronald Reagan and Barry Goldwater who now finds himself maligned on the right in the Trump era as a Republican-In-Name-Only.

“I stand before you, that rarest of species: the American conservative,” Flake said in well-received remarks on the campus of St. Anselm College. “’Americanus NeverTrumpus. Subgenus: RINO.’ Now there is a scurrilous rumor afoot that we are not only rare but endangered. But I don’t believe it.”

Flake has been making the media rounds and saying the same thing in a number of interviews and speeches.

A leading Republican critic of Donald Trump said there on Sunday was a “crying need” for someone in the party to challenge the president in 2020.

“All I can say is I hope that somebody does challenge the president,” the Arizona senator Jeff Flake told CNN’s State of the Union. “There is a crying need out there for some Republicans to stand up and say this is not normal. This is not right.”

Flake, a conservative, will not stand for re-election in November and has emerged as a strident critic of Trump’s policies and behaviour. He has not ruled out a 2020 run himself. Other Republicans touted as potential rivals to Trump include the Nebraska senator Ben Sasse and Ohio governor, John Kasich.

“We want Republicans who will take the higher ground,” Flake said. “To see what’s going on right now in terms of the chaos and these actions that clearly are not conservative on tariffs and whatnot, it’s not just the policies but the behaviour as well.”

Flake is clearly pondering himself for that role, saying that “hasn’t ruled out” the idea.

Arizona Sen. Jeff Flake is retiring at the end of his term but he may not be giving up on politics altogether.

The staunch critic of President Trump said Thursday during a speech at the National Press Club that he may take on the commander in chief in 2020.

“It’s not in my plan to run for president, but I am not ruling it out. Somebody needs to stand up for traditional Republicanism,” Flake said. “Somebody needs to raise that, for nothing else than to give people hope that that decent party will be back. We’ll get through this.”

He also said the blind loyalty to Trump shown by many of his fellow Republican colleagues means the GOP “might not deserve to lead.”

Flake points out that if the President loses Congressional majorities in November’s midterms, the president will be weakened and a GOP or Independent challenge viable.

While Flake acknowledged the uphill battle of defeating the president if the election were held today, the Arizona Republican said all that could change dramatically if the GOP has disastrous results in the midterm elections.

“Not today, but two years from now, possibly. Things can unravel pretty fast,” Flake said. “As soon as he’s viewed as one who loses majorities in the House and the Senate, and there’s no chance that someone in the 30s can win re-election, people might move on.”

He is not stopping there.  Flake says that if Trump loses the House and/or the Senate yet retains his base’s support Flake would consider running against him as in Independent.

He also said if Trump does not lose support from his base, there is still another option to run as an independent.

“I’m not ruling that out either,” he said. “There are going to be a lot of other people in the party looking for something else.”

All of this is a bit strange given that Flake is not running for reelection because he can’t get reelected to the Senate in his own state.

It’s difficult to say whether Flake is serious or not, considering he acknowledged in October that he wouldn’t even be able to win a GOP primary in his state.

“The bottom line is if I were to run a campaign that I could be proud of, and where I didn’t have to cozy up to the president and his positions or his behavior, I could not win in a Republican primary,” he said the day after announcing he wouldn’t seek reelection.” “That’s the bottom line.”

It sounds like Trump really knocked Flake’s nose out of joint.

I hope that Flake does step up so that Trump and all the others can stomp his butt into a bloodpuddle and then walk it dry.

These never-Trumpers are in protected forums right now and if they ever step into something like a primary challenge the rest of us will get to register our disgust and hatred of these traitors and it won’t be pretty.

Flake couldn’t win re-election in his own state and he knows it. He’d just be looking for the federal funding for campaigns.

One of the many great things about Trump is he flushes out and highlights the RINOs who’ve heretofore been hiding in plain sight in our midst so we can rid ourselves of them.

He had to get rid of his dog because the dog couldn’t stand being around him.

Wasn’t it a Flake family member who got rid of a bunch of dogs?

Jeff Flake is intellectually lazy, and like the senior Senator from Arizona, does not have sense enough to hire a competent legislative aide to make up for his own deficiency.

To me, the inability to be self-critical enough to notice one’s own deficiencies that are relevant to one’s office (everybody has them) and failure to hire support staff to make up for those deficiencies regardless, is disqualifying for the position of chief executive of the United States.

Flakey Flake, Spooked John Brennan, hopefully more, know that sunlight is coming for you. It’s why we put Trump in office.

Hahahaha. You’re supposed to wait until 1 April for these kind of stories.

I haven’t ruled it out, either. Just FYI.

Flake is one of that curious breed of RINO that is convinced that the ‘real’ Republicans and conservatives love him and that he’s their champion – not unlike idiots like Lindsey Graham or John Kasich. Remember Kasich? Utterly refusing to drop out of the race and seemingly convinced that the delegates at the Republican convention were going to make him the nominee despite barely winning only his home state.

Stand by for Flake to get deep and philosophical about how he couldn’t get re-elected because of ‘lies’ and he didn’t want a messy primary because he ‘cared’ about his constituents.

Americanus NeverTrumpus should be added to the endangered species list. Their ability to reproduce is severely limited by a tendency to over-indulge in self-love.

Is George Will still alive?

Flake is the RINO’s John Kerry.

ROFLMA, good one Fuzzy! Wait, he really did say that?….ROFLMA that’s even funnier!

Flake, the one who saw his polling in his state and realized he would lose if he ran, the one who used his phony rant against Trump as the reason once he saw he would lose, to get headlines and pretend he mattered to any but the never-Trumpers and the left who wouldn’t vote for him anyway. I can’t think of a name more apt for him and his delusions of grandeur other than names that aren’t used in polite society.

He was elected because he pretended to be a different candidate than he was, kind of like how so many Democrats have done. His record and stances put his candidate talk to the lies they were.

Yeah, I find him credible, as credible as a snow balls chance in hell to gain any traction. He is a media whore like McCain, and a pretend Republican, like McCain. He got the breathless treatment from the media with his announcement of leaving office and it was like drinking Red Bull, it gave him wings. What a moron.

I went from Washington state (Murray/Cantwell) to Arizona (McCain/Flake). I haven’t had representation in the Senate for over 15 years.

LOL… i live in #Failifornia. you think *you* have it bad?

Pete Wilson was the last decent Senator we had here.

Ha! He’ll do as well against Trump as those other 16 last time around

Most of the other 16 had some credibility and impressive resumes though.

Flake will have to move to another state – he is persona non grata on the ground here in AZ.