Eric Holder: I’ll Run for President if I Believe I can Unify the Country

Eric Holder: I’ll Run for President if I Believe I can Unify the Country 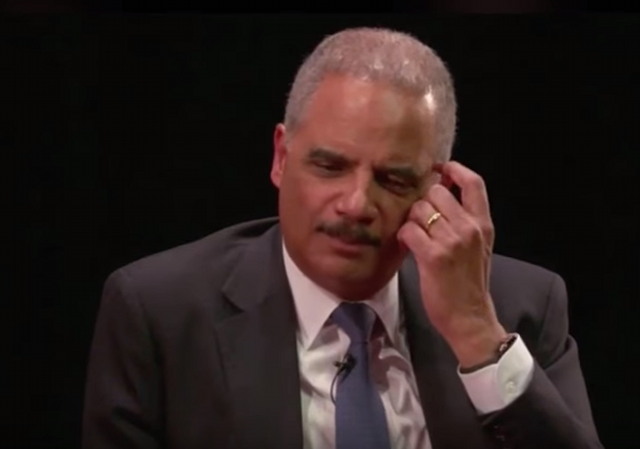 Eric Holder is easily one of the most polarizing figures in American politics. He is also deserves an award for lack of self awareness. He has teased at running for president several times in recent months, but his new justification for why he would run is stunning.

Holder: If I Run for President, It’ll Be From Concluding I Could Unify the Country

Former Obama administration attorney general Eric Holder said Wednesday that if he ran for president, he would do so from concluding he could unify the country.

That statement came during an exclusive interview with New York Times reporter Alex Burns. Burns noted that Holder has become much more ambiguous about whether he could run for president in 2020 and asked about his general thoughts.

“If I were gonna do it, I’d do it because I think I would have concluded that maybe I could unify the country,” Holder said.

He then clarified, “help unify the country, because it’s bigger than any one person.”

“That I could advance—actually, that I could repair then advance the nation in a variety of contexts. That I thought I had something to contribute, that would be the thing that would push me toward considering a run,” Holder said.

Holder is currently preparing to fight Trump’s decision to include a citizenship question on the census.

A Democratic group headed by former U.S. Attorney General Eric Holder will go to court over a decision by the Commerce Department to include a question about citizenship on the 2020 census.

Holder said Tuesday that the group, the National Democratic Redistricting Committee, would fight the Trump administration’s decision, arguing that including a citizenship question would drastically lower the response rate on the 2020 census and lead to an inaccurate count.

“We will litigate to stop the Administration from moving forward with this irresponsible decision,” Holder said. “The addition of a citizenship question to the census questionnaire is a direct attack on our representative democracy.”

Last word goes to Benjamin Weingarten of The Federalist:

Doesn’t get any richer than Eric Holder — Mr. “I Won’t Prosecute Black Panthers with Billy Clubs Standing in Front of a Voting Center” — talking about a basic census question on citizenship “intimidating” people https://t.co/DrIFfGaieF https://t.co/PvMuQKK6mN

Well, Eric, you can’t unify the country. Not YOU.

With that out of the way, please go ahead and run.
It will be fun to see all your dirty laundry out in the open.
It will be satisfying to give you a humiliating defeat.
It would be divine justice if you finally get indicted once all of America learns who you are and what you’ve done.

Would he whine and pitch as big a tantrum as Hillary, probably blambing his loss on racism, and it would be his bald faced racism which causes him to lose. I have no doubt that anyone with an IQ over 95 would want to see him handed his head.

These guys truly are deaf aren’t they.

With ALL their baggage Trump will have a field day with these idiots.

He being part of the regime which divided this country to a point where it is as bad as the lead up to the Civil War, set race relations to an all time low, was one of the worst in politicizing the DOJ and helped create the weaponizing of the various agencies. Yeah, he would be a unification type candidate, unifying the moon bats and insane leftists while bringing his gun to a knife fight.

He is almost as narcissistic as his man-child President. And so scandal free, at least as far as the media propaganda machine is concerned. Brilliant. Simply brilliant.

And first AG to be held in contempt of Congress.

And oh yeah, a delusional asshat.

That Eric! Always joking, what a sense of humor that guy has.

The most appropriate response to this announcement:

Of course he’s actually serious, and mentally so out of touch with reality as to need medication.

History indicates he’s more into what most folks would identify as division and demolition. Such a turd.

He must be launching his stand up comic career.

But will he quack for MSNBC?

There seems to be a pattern to this brand of “leader.”

These Dems/Progs have a real problem with reality. Example: they think a man can win an Olympic medal for Decathlon, father a few children, live 60 years, pretends he can change his mind, take chemicals and have genital mutilation surgery, and they will call him a woman, give him female awards, and feel great about themselves. Reality, really?

Why isn’t Holder in prison?

Because sesssionszzzzzz is attorney general.

The citizenship question is another win-win. If it flies that’s good. If it falls, that’s good, because the fight will call attention to non-citizens voting.

Run for POTUS?
How old is he now?
How old will he be when he gets out?

I think he’s right. He would unify the country.

Sadly, I don’t believe that would prove true. Democrats are that delusional.

Holder will unify the country…by intimidation and weaponizing the entire Federal bureaucracy. The American people would all be under one gigantic thumb pressing the life out of everyone.

Oh, he’ll unify the country all right. Just not in the way he thinks.

I really think that Holder is capable of triggering a revolution, the kind where over 80% of he population wants to teach him about the business end of guns.

Awesome. I never in a million years thought that there would be a worse president than Jimmy Carter. Then along came the weak, feckless, incompetent Barrack Obama and kicked Carter to the curb. Now a mere four years later, Eric Holder seems determined to try to oust Obama as the worst president ever. I can’t believe he has any chance whatsoever–even in the corrupt incompetent swamp that passes for the democrat party–but if he’s nominated, I simply can’t wait to vote against him. Delusional!

His parents should have named him Richard.

“To sweep all 50 States, the President would only need to do two things: blow the Sultan’s brains out in Times Square and then walk across the street to Nathan’s and buy a hot dog” – Leo, West Wing

I am guessing his “unification” would involve camps for most white folk and all gun-owning conservatives. That would work out really well 😉

Well, I don’t know … the black racist SJW formula probably won’t work again—Obama’s sole strength was that he was a total unknown, allowing him to run as a vague “Hope! Change!” candidate. We know far too much about Holder for that to work next time around.

Besides, he just seems to lack Hillary’s charm and charisma.

I’m still waiting for my ‘Fast and Furious’ gun. I was hoping for one of the .50 cals but I’ll take whatever.

You mean you don’t get all of your guns from the NRA like everyone else does?

For the foreseeable future … America can not be united by any president.

The fact this divisive, pompous thug believes in any way he could unify anything beyond thuggish, POC groups is a testament to the elitist, out-of-touch bubble he lives in. Like Hillary, he belongs in prison, not running for President.

Anthony Weiner will be out of prison in time to run with him.

I don’t understand Holder. Why would he run for President of a nation of cowards.

This guy is such a piece of garbage. And a legend in his own mind.

And one of only TWO public figures EVER to be photographed picking their nose at the podium in Congress:

And then, obama did it while giving a press conference:
http://www.politifake.org/picking-his-nose-obama-politics-15328.html

Infantile sleazeballs, all three of them.

I am reserving judgement on this until I hear from Rosanne Connor.

Eric Fast and Furious Illegal Automatic Gun Give Away to Mexican Gangs Holder – oh no you won’t!

You forgot to say “Hilary May I?”

I wonder if this isn’t a move to protect himself from prosecution – as in “Trump’s Administration is targeting me for political reasons.”

Holder has more skeletons in his closet than most cemeteries have in the ground – starting with Fast and Furious.

Since 99+% of the people refusing to respond to the census because of this question cannot legally vote anyway, how can the question be an attack on democracy? I think what he’s really worried about is electors and House seats being apportioned away from California and Illinois, both of which have large Mexican populations and generally deliver a lot of electors and House votes to the Democrats. It would probably result in Texas getting less representation too, which evens it out a bit.

Whether they can vote is irrelevant; they still count for representation, so the more aliens a state has the more weight that state’s citizens’ votes carry. Undercounting aliens will short-change the states with a lot of them.

But you know, I’m OK with that. The Republic would survive.

Holder running for President??? Who still believes that Democrats don’t have a sense of humor?

God willing, the only “presidential” post Holder will be running for in the future will be president of his penitentiary cell block council.

Holder is, thankfully, too transparently embittered a man to ever be elected President. A man lacking optimism and introspection, happy to denigrate the alleged “nation of cowards” that had just made history by electing an egotistical, self-congratulatory and unqualified far-left radical as President, largely on the basis of the singularity of his racial composition. That’s “cowardice?” I’d call it “generosity” (and, “naiveté”).

Besides possessing an inappropriate temperament for an aspiring national leader, Holder’s indefensible and contemptible mindset vis-a-vis equal application of the law that prevented him and Thomas Perez and the rest of the Obama DOJ Civil Rights division from enforcing federal voting rights laws in a race-neutral manner, back during the 2008 presidential election in Philadelphia, is utterly disqualifying. A group of black militants (“Panthers,” or whatever ridiculous moniker they call themselves), dressed in military garb and brandishing truncheons, had positioned themselves outside a polling place in an obvious attempt to intimidate voters entering the facility. Obama’s DOJ shamefully declined to prosecute the parties responsible, with perpetually embittered Holder testifying before Congress that the conduct at issue, while objectionable, didn’t result in the same level of hardship experienced by blacks during the Civil Rights era!

So, to recap — here we had the Attorney General of the United States, someone who ostensibly should be staunchly committed to the race-neutral enforcement of federal civil rights laws, unabashedly admitting that his personal standard for enforcing federal civil rights law is whether the conduct complained of rises to a level similar to what blacks experienced in the 1960’s.

Leftists believe in an utterly capricious application of the law — they’ll adhere to it and cite it when it’s convenient, and, dispense with it and ignore it, when it is inconvenient and runs contrary to their self-styled “social justice” agenda.

This must be a joke. If Eric believes he can unify the country he needs to see a psychiatrist.

Racist Eric Holder thinks he can unify the country, so says an article from The Onion 😉

@Holder … So you wants to unite us. That can be restated as … “In YOUR JUDGMENT people aren’t united … but YOU have the insight and ability to whip us into shape and MAKE us AGREE WITH WHAT YOUR CONCEPT OF A UNITED AMERICA IS”. The gall of the democrats is unrelenting. Leave us the F alone Mr. Holder … we’ll make our own decisions without your arrogance and intervention.