Exactly why the public hates the media. They never miss an opportunity to exploit someone when they’re down. 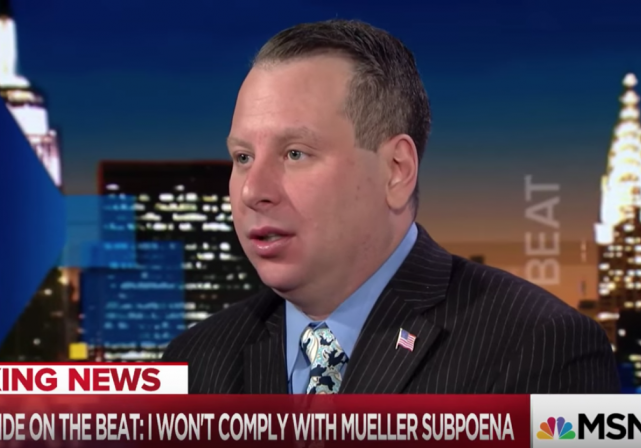 Monday, former Trump aide Sam Nunberg gave a bizarre interview to the Washington Post, saying he was going to ignore the subpoena to appear before a federal grand jury.

Later, Nunberg went on a network news tour, where, in a strange stream of consciousness, Nunberg spilled his guts on everything from White House Press Secretary Sarah Huckabee Sanders to why Trump loves Corey [Lewandowski] more.

Nunberg first called into ‘The Lead’ with Jake Tapper on CNN. We covered that here.

Then made the rounds joining Erin Burnett on CNN (video beneath) and Ari Melber on MSNBC; each interview more erratic than the last.

MSNBC even described the interview as “historic.”

The trainwreck saturated the news cycle.

This is actually in a CNN story:

"Correction: This story initially misidentified the person Nunberg referred to as a 'moron.'"https://t.co/pmlQNQP4N1

My 2 yr old daughter Cressida just said "Is Nunberg's complete saturation of the news today without presenting any concrete information while offering only titillating hearsay and being asked if he's intoxicated proof journalism has become just ratings focused entertainment?"

But Nunberg’s friends were rightly concerned about his wellbeing.

I'm deeply concerned about this man –not in the snarky twittery way — but in a sincere this guy needs help not attention way. https://t.co/wQ2rLLi5dx

Same — @NunbergSam is my friend and I am worried about him, as are many of his friends. https://t.co/sc96d8Evdd

CNN hostess Erin Burnett said live, on air, “talking to you, I have smelled alcohol on your breath…I know it’s awkward.”

And yet, Burnett continued with the interview.

After the media circus, Numberg told the AP he would cooperate with Mueller’s investigation after all.

He’s now apologizing for some of the things he said:

Sam Nunberg apologizes to @PressSec: “It was wrong of me to attack Sarah. Sarah’s very talented. It was a rude comment. I think she does a very good job under rough circumstances. I owe her an apology. I was having a rough day.” via @esaagarhttps://t.co/0jdCTDr7oz

Nunberg should not have been interviewed on live TV, not when it was clear he was likely drunk or at the very least, unwell. Worse still, hosts like Burnett were told Nunberg was unwell and had no business being on live TV. 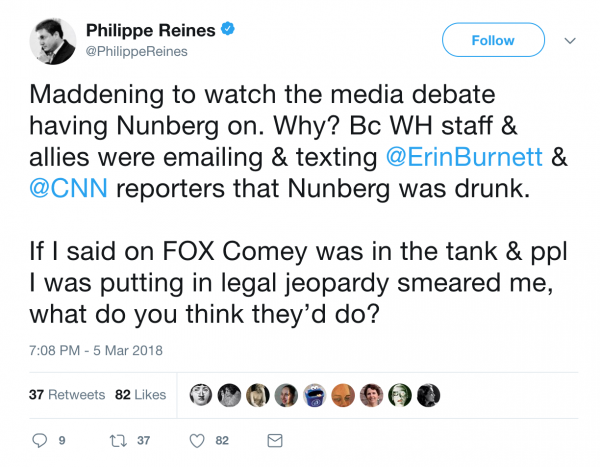 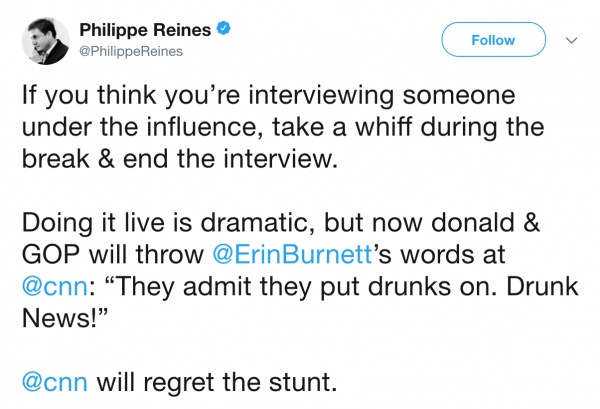 Ratings > any sense of humanity or rightness. That’s exactly why the public hates the media. They never miss an opportunity to exploit someone when they’re down.

Watching that guy talk reminded me of the guys at the sports bar shouting at the TV at the end of a long game, after they’ve downed 2 or 3 pitchers of brew.

Of course I don’t know if he was actually drunk or not. But I’ve seen that goggle eyed look before.

I see his point. Asking for all emails is a fishing trip, or maybe he’s going for the insanity defense

Quite literally base, instinctual, predatory behavor. The media hyenas fell on the one that fell out of the herd. Blood-on-the-wind opportunism.

Underscores why we best not lose the culture war to this pack of Jacobinist carrion-feeders.

The deed will be complete when that #nevertrumper vulture Bill Kristol swoops from the sky and pecks the marrow from Nunberg’s bones.

Kemberlee Kaye – calling this guy a “Trump aide” is about like calling a tree a forest.

He worked for Trump for years before Trump ran for President. He was, in fact, an aide to Trump. They parted ways in 2015 when Trump decided to hire Corey Lewandowski.

He did a GREAT GREAT JOB! Better than the Charlie Chan movies … oops I mean Jackie Chan movies: Drunken Master!

Tell me again who this Sam Nunberg character is and why anything he has to say (drunk or sober) is important to the circus shows he appeared on?

Pretty sure even intoxicated Nunberg knew he only need tell the truth if he’s under oath… and not even then if you’re a Clinton. If this guy was anything more than an inconsequential guppy, Mueller would have rolled him long ago.

This guy has a point. Go before the Grand Jury and tell the truth and I’m certain Mueller will find some technicality to either get you to cop to or drive you into the poor house (like flynn).
I suspect Mueller wanted this guy to put leverage on Manafort or someone else in the chain.
Would love to see him sue to get the subpoena quashed. Maybe bring some of the special counsel fishing trip into further review.

The press, of course, will run with every single scrap this man says that can be used against Trump. Period. (Everything he says in favor of Trump will vanish)

That being said, could this be a ploy? (or at least a convenient handle) By going on national TV and blathering both ways while under the influence and looking generally like a nutcase, he becomes the kind of witness for the prosecution that the defense *loves* Anything that Mueller tries to use from him now is tainted by him saying the exact opposite on TV. And trying to prosecute him in order to get his testimony suddenly gets less useful, and therefore might get him out from under Mueller’s hammer.

For once CNN did a good job – it exposed the nonsense of this man, helping the Trump White House.

Is that John Lovitz? Acting!