“Let him arrest me,” Nunberg said. “Mr. Mueller should understand I am not going in on Friday.” 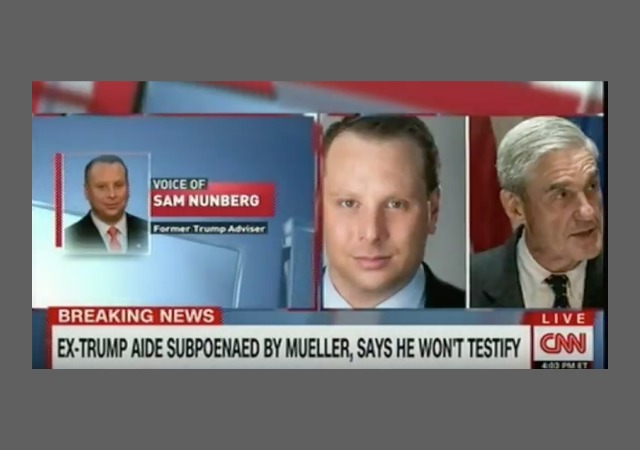 Nunberg subpoena that was floating around on background has now got his name attached. He tells me he is unlikely to go, that he "saved Trump's ass" during the McCain fight in August 2015, and that it's all an effort to get Roger Stone.

A defiant Nunberg spoke to the Washington Post saying “I’m not spending 80 hours going over my emails with Roger Stone and Steve Bannon and producing them. Donald Trump won this election on his own. He campaigned his ass off. And there is nobody who hates him more than me.”

Nunberg forwarded an email listed as coming from the office of special counsel Robert S. Mueller III seeking his appearance in front of the panel on Friday.

Nunberg said he does not plan to comply with the subpoena, including either providing testimony or documents.

“Let him arrest me,” Nunberg said. “Mr. Mueller should understand I am not going in on Friday.”

Nunberg said he was planning to go on Bloomberg TV and tear up the subpoena.

It is unclear what actions Mueller would take if Nunberg does not appear in front of the grand jury. Nunberg, an early campaign aide, was dismissed by Trump and no longer is in his good graces.

“The Russians and Trump did not collude,” Nunberg said. “Putin is too smart to collude with Donald Trump.”

“I’m not spending 80 hours going over my emails with Roger Stone and Steve Bannon and producing them,” Nunberg said. “Donald Trump won this election on his own. He campaigned his ass off. And there is nobody who hates him more than me.”

Later, Nunberg called into ‘The Lead’ with Jake Tapper, where he was more than happy to share his opinions on anything, everything, and everyone in Trump World.

Nunberg also claimed Trump knew Donald Trump Jr. met with the Russians, that nothing happened, nothing worth hiding anyway, and that Trump should’ve just said he was aware of the meeting and been done with it.

He then called James Comey a “disgrace” that special counselor Robert Mueller was an “honorable man” and then reiterated his refusal to help Mueller’s team create a case against Roger Stone.

In a separate tangent, Nunberg called Carter Page a “scumbag” and said he believes he definitely colluded with the Russians, and despite being named an advisor, Page was just a “name on a list.”

Just…just watch. I could not make up a story like this if I tried:

Nunberg concluded by requesting Tapper’s advise on whether he should cooperate with Mueller’s subpoena. Tapper responded, “If it were me, I would…sometimes life and special prosecutors are not fair.”

Mueller is a joke. At this point everybody with a brain understands he’s not finding anything.

He’s started doing dumber and dumber shit in an attempt to get Trump to fire him so they can campaign on it.

And don’t forget where Rosenstein came from: Sessions.

Nunberg is a nutcase, but this whole thing is going sideways.

IG report now delayed, Sessions may or may not be white hat, etc.

The FISA abuse alone should have generated a special counsel – yes, it needs to be SC because DOJ cannot investigate itself. As many observe, special counsels are admissions that DOJ isn’t up to the task.

Is all this crazy nonsense really happening or are we just watching a really bad movie? This nonsense needs to end. At this point, fire Mueller. What difference does it make?

Nunberg appears to be a nut, but sometimes it’s those folks who reveal the truth. Why should he comply with rogue government’s overwhelming power and money as it demands he incriminate himself or others or be broken financially……while bigass criminals like Hilary and Obama and others walk around free and unmolested by what it is now evident to everyone is a corrupt banana republic justice system. This is one of the first early indicators of the death of the rule of law, multiplied by the millions who will no longer feel it behoves them to be honest with the shakedown artists of the IRS, or even that government represents them in any legitimate way. Sessions and Wray if they are not actively part of the deep state, are furthering the destruction of the rule of law by trying to preserve a reputation long gone of DOJ or the FBI that only exists in their minds. Without massive purges of its denizens, numerous trials, long harsh sentences for betrayal of the public trust, pension striping, and a general salting of the earth from whence sprang the corruptocrats law is now just a dead man walking.

Takeittothelimit: Why should he comply with rogue government’s overwhelming power and money as it demands he incriminate himself or others or be broken financially

Nunberg should comply because it is a lawful court order. He has the right to invoke the Fifth Amendment rather than incriminate himself. There is no such privilege to not incriminate others — nor should there be. Nor is there a privilege for the requested documents.

If he thinks the subpoena is unlawful, then he has a right to take that up with the presiding judge. Without an independent judiciary, there is no rule of law.

Noonan: “An unjust law is no law at all.”

There is nothing unjust about being required to testify during a criminal investigation.

And if a law is “unjust” then take it before the SC. Or overturn it through the political process. Other than that work outside the democratic process and win by revolution. Now which society do you want to live in? Dear Martin?

Looks like Mueller was just tossed a hand grenade. Now the press can obsess over his juggling skills.

This Presidency just keeps getting better and better.

“I will hire the best people…the greatest people. You’ll get tired of all my great people…”
Donald J. T-rump

Give me all your emails sounds unconstitutionally vague.

MarkS: Give me all your emails sounds unconstitutionally vague.

It might be, and a judge may have disallowed such a broad request, but the Nunberg subpoena is specific to documents concerning certain individuals and within a specific time period. In addition, Nunberg has the right to contest the subpoena, in whole or in part, but does not have the right to simply disregard a lawful court order.