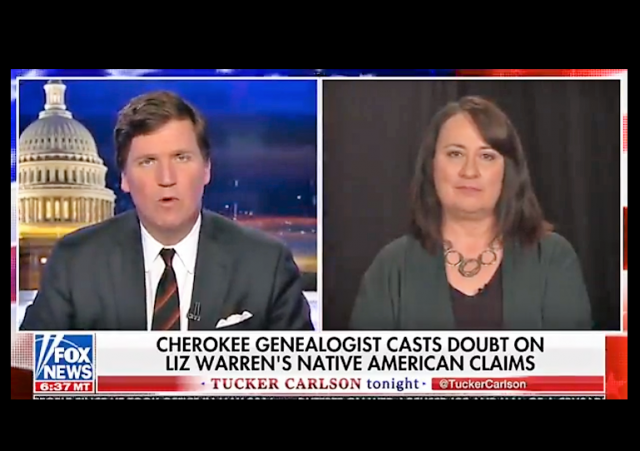 Elizabeth Warren’s disputed claim to be Native American has been all over the headlines again after Warren’s appearance on Sunday shows in which she evaded questions as to whether she would take a DNA test.

Warren appeared rattled and annoyed, as we documented in Elizabeth Warren cracking under the pressure of Trump’s ‘Pocahontas’ taunts.

I discussed an issue the media is missing in a recent post, No, Elizabeth Warren cannot prove she’s Native American merely by taking a DNA test:

Nonetheless, the issue of taking a DNA test is so simple that it is irresistible headline material.

In her interviews, Warren repeated a claim she has made before that her family lore justified her claim to be Native American. At Elizabeth Warren Wiki, we went through a variety of her family lore claims and how they were not supported by available evidence, including the story about her Aunt Bee’s high cheekbones.

The story Warren focused on in her Sunday interviews is a story she had told before, that her parents had to elope because her father’s family would not accept her mother because her mother was part Cherokee and part Delaware.

Cherokee genealogist Twila Barnes has previously uncovered evidence disputing that story, including a wedding announcement for her parents marriage in the local paper that is inconsistent with there being some sort of shame about the marriage:

In this 2012 interview, Barnes explained why Warren was not Cherokee and why the parents elopement story made no sense:

With Warren’s supposed family lore back in the news, Barnes’ research is receiving attention.

The Washington Times has the story, Elizabeth Warren’s story of racist grandparents disputed by Cherokee genealogist:

Sen. Elizabeth Warren sought Sunday to bolster her shaky claims of Cherokee ancestry with the story of how her racist grandparents drove her parents to elope.

But Cherokee genealogist Twila Barnes says that account has its own credibility issues.

Ms. Barnes, who said her research into Ms. Warren’s family found “no evidence” of Native American ancestry, has challenged key elements of the senator’s tale of how her parents, Pauline Reed and Donald Herring, defied his parents by running off to marry.

“The problem with Warren’s story is that none of the evidence supports it,” said Ms. Barnes in a 2016 post on her Thoughts from Polly’s Granddaughter blog. “Her genealogy shows no indication of Cherokee ancestry. Her parents’ wedding doesn’t resemble an elopement. And additional evidence doesn’t show any indication of her Herring grandparents being Indian haters.” ….

“If Ms. Warren’s parents eloped due to her mother being ‘Cherokee and Delaware’ and it was such a disgrace, why did they rush back to Wetumka the same day they were married and proudly announce it to everyone?” asked Ms. Barnes. “If there was shame associated with the marriage and it caused so many problems, why was it happily announced in the local paper?”

Given that Ms. Warren’s father had just turned 21, the age after which he could legally marry in Oklahoma without his parents’ permission, “Maybe his parents feared if he got married, he would drop out of college. And according to the evidence, that is exactly what happened,” she said.

“I have never seen anything that called into question the integrity of Twila Barnes‘ research,” said Mr. Jacobson, who runs the Legal Insurrection blog. “To the contrary, she has meticulously researched Warren’s family lineage demonstrating no Native American ancestry, as well as facts rebutting Warren’s family lore stories.”

Barnes appeared on The Tucker Carlson Tonight show tonight, and absolutely skewered Warren’s claim to be Cherokee and her family lore story.

Barnes: No. She’s not enrolled. She has no family on the rolls, she has no indication of Indian ancestry anywhere in her lineage.

Tucker: What do you know about [the parents’ elopement story], is that true?

Barnes: I don’t believe it’s true. They were married by a prominent minister in a town just maybe 15 miles away…. I don’t think he would have done a wedding for two kids that ran away an eloped and their parents didn’t approve. Also, Elizabeth Warren’s father, he had at least one brother and one sister who also just went and had small weddings the same way. I just think it’s the way their family did things at the time. I don’t think it was an elopement.

Tucker: There’s a lot of American Indians in Oklahoma, what do they think of these claims?

Barnes: Well I can’t speak for all of them, I could speak for the ones that I talk to. Some just laugh, because it’s so ludicrous. I mean, you know, she has no proof of anything. She’s a lawyer, and she’s supposed to understand you need proof, yet she keeps claiming. Many are angry because they feel like she’s appropriating an identity to gain something from that. And she has no respect for true Native Americans.”

Tucker: I think all of that’s true, it’s identity theft, there’s no doubt.

It’s much worse than appropriation – Warren using this fake heritage on her Harvard application constitutes fraud.

But even if she did fill one out, there is not a shred of evidence that she repeated her lie on it. You may speculate that she did, but you can’t convict someone, even in the “court of public opinion” on the basis of such a pure guess.

People are recruited – then vetted.

It is well know Fauxcahontas claimed to be an Indian to gain employment advantage. And how.

No, it is not known. The only thing that is known is that she had herself listed in a directory of “minority” academics, whose only possible purpose was to bring oneself to the attention of those colleges trying to boost their “minority” numbers. Which strongly implies that she wished to take advantage of this, but there’s no specific evidence that she ever told this lie on any form or application, where she could potentially be called to account for it.

There is no specific evidence that I am not an Apache helicopter, but then again…

There are times I agree with you, and times I do not. This is one of the latter. Your point is strangely similar to argument about how many Angels can dance on the head of a pin.

Because she won’t authorize release of her employment record, you are correct that there is no absolute proof she did, or did not, claim Native American minority status.

But the circumstantial evidence shows she did exactly that.

but you can’t convict someone, even in the “court of public opinion”

You live on a very strange planet.

OK, you can’t honestly do so.

Of course there is an application. I have been “headhunted” numerous times in my career and each and every one involved filling out paperwork. Its how an employee record is created.

Milhouse asks, “Do people who are headhunted have to fill out applications?”
.
Yes. We all do.

Milhouse, you don’t know what you are talking about. I’ve been recruited; jobs came looking for me, I didn’t have to go looking for the job. There is still the formality of doing the paperwork for HR purposes.

Elizabeth Warren didn’t fill out standardized job applications. Law professors generally don’t whether or not they’re claiming minority status but they do have to provide biographical data. Again, for HR purposes. On her personnel forms when she was at UT she checked the block for white. On the other hand, on her biographical form when she was hired by U.Penn she checked the block for Native American.

That is the only way she could have gotten listed as a minority law professor in the Association of American Law Schools faculty directory. And, again, U.Penn had more detailed information that identified exactly what sort of minority she was. Native American, as they reported in their EEOC filings.

There’s only one way they could have gotten that information. Warren represented herself as a Native American (even though even she admits she didn’t meet the legal definition of Native American).

Since schools used the AALS directory as a recruiting tool when looking for among other things diversity hires, that’s how Harvard Law School identified Warren as a “woman of color.” And again, after she was hired she provided the school with biographical data for her personnel file. And again represented herself as Native American to her employer. Which is why Harvard also identified her as a Native American on their federal filings.

Between what Warren herself has been forced to admit to and the few documents reporters have dug up these are established facts. They are beyond dispute. But if it makes you feel better, you are correct about one thing. Application is the wrong word for the personnel records on which she checked the block for Native American.

What? You mean to write that UPenn didn’t arbitrarily, without any input from Warren, decide they needed a Native American “number” and assign Warren to fill that quota? I’m gobsmacked!!

Poco will be a one-term senator. Thank you Professor Jacobson and Tucker Carlson.

I don’t know about the one-term prediction. Massachusetts voters have proven themselves quite unabashed about the reprobates they elect to and keep in Congress.

They could dig up Teddy and over half the Commonwealth would vote for him!

Mass, NY, and IL are yellow dog states for demrocrats, the only time a republican can win is if they need a scape goat for something

Southern IL and Northern NY are mostly Republican. But, of course, Chicago and NYC dominate their respective state’s politics.

But, but, but…..only Cherokees have cheekbones. Seriously though, she may actually be an Indian. If anyone can soften a buffalo hide by chewing on it, she can.

Wishful thinking David. She will cruise to re-election in MA. This is the state that repeatedly elected Ted Kennedy, Barney Frank and Gerry Studs.

But anyone can claim any ancestry that they identify with. No DNA required.

If you want preference in college admission, find out what they are short of and invoke that identity.

This way Affirmative Action can be rendered totally useless.

Eskimo is the best for college applications. If Rachel Dolezal can designate herself as black, why can’t we all designate ourselves as American Eskimo?

Are you just trying to get a seal hunting license?

Let’s remember that way before anyone else even cared about this story, Professor Jacobson was showing that Warren was a Fauxahontas.

The Boston Herald, especially Howie Carr, and Professor Jacobsen have been the leaders on this.

What should REALLY worry us at this point is not this fraud, but the frauds that comprise the GOP, who will do us real damage in the coming months.

Can ANYONE think of ANYTHING that rat Paul Boehner or that other rat McConnell have done to support the GOP candidate in PA?

As Rush Limbaugh might say: they are the “drive-by GOP.”

They will effectively destroy us in the coming months, not the democrats. That’s for later.

“Yes, but lets talk about something else instead.”

Poof? Was that an intended pun?

I’m sure that at the time Fauxcahontas decided to claim Native American minority status she thought she was being quite clever. Perhaps she was drawn to taking that path by the old Oklahoma saying “Scratch an Okie, find an Indian”? In any event it probably seemed a good way to improve employment prospects, never dreaming it would come back to bite her in the posterior. She’s been caught in “cultural appropriation” (though I doubt the Left will attack her for it) and now finds she must either admit the fraud or double down on the lie.