Welcome to Planet #Resistance, where a month equals a year!

Welcome to Planet #Resistance, where a month equals a year!

A world where #WINNING is countered by #WHINING. 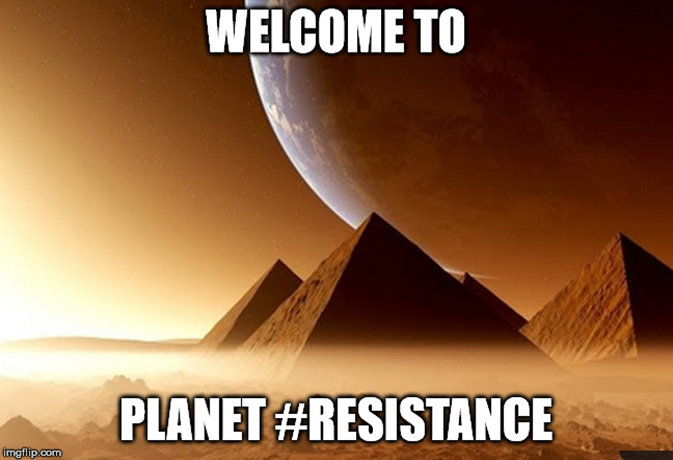 There is a new meme making the rounds, and I wanted to do a little scientific analysis on its potential meaning.

The news maelstrom was also a fitting coda to the capital’s whirlwind January, which never let you catch your breath. It began with the president taunting North Korean leader Kim Jong Un that he had a “bigger” and “more powerful” nuclear button on his desk, proceeded to waltz through rumors of a possible Oprah Winfrey 2020 presidential run and ended with a State of the Union address Tuesday that by now many people have probably forgotten.

As a HuffPost headline summed up the past 31 days: “What a year this month has been.”

Actually, the “news maelstrom” has been more of a shit-storm, as the mainstream media covers each aspect of the Trump’s presidency, from his hamburger consumption to his wife’s State of the Union attire, in a breathless, clickbait-filled competition to land the one, great controversy that will bring down his administration…or at least earn them social media acclaim. American pundits are so desperate to prove they were right about what an incompetent, corrupt, womanizing, incestuous, drooling, delusional, Hitler-loving idiot Trump supposedly is, their distortion of reality has created a time warp in which one month equals a year.

What is even more appalling is that these geniuses think they are being dreadfully clever. Take the original HuffPost article, which is truly a marvel:

…HuffPost spoke with a number of sources closely associated with the news. Even they were bewildered that news events actually happened within the calendar month. They described January as “long.”

“What month are we in?” asked one.

Another wondered whether the government shutdown happened in December or January.

“That’s crazy,” said a third person, upon learning that the shutdown was still in effect JUST LAST WEEK.

Here, in reverse chronological order, is a list of just some of the things that actually happened in January 2018

Then the article goes on to list the news items for this month…many of them #FakeNews items or press-generated dramas that did nothing more than move the media’s preferred narrative. Here is what is offered for one, select day in January:

― Trump goes to the World Economic Forum in Davos, Switzerland. He is praised for being “presidential” when he successfully reads from a teleprompter but is booed when he criticizes the media as “fake.”

I think I can speak for a number of Legal Insurrection authors that one month also seems like a year to us, too. This is because we are forced to travel to Planet Resistance, take a few readings, then correct, refute, or provide additional, critical details on the piffle that is being offered as serious journalism by our press.

I believe all of us would be grateful if our press returned to the reality of Planet Earth and offer substantially more fact-based reports, instead of politically punditry dressed up as news.

While our journalists remain on Planet #Resistance, expect more insipid memes and #TrumpHate.

Sorry Ms. Eastman, the press (MSM) apparently could only afford a one-way ticket. As far as I am concerned, good riddance.

Same with the GOPe – and even Swamp Sessions:

AG Sessions in wake of explosive memo: ‘No department is perfect’
https://www.washingtontimes.com/news/2018/feb/2/sessions-wake-explosive-memo-no-department-perfect/

Sessions’s statement is so ridiculous, as to be a parody of itself.

Kind of like the “Nobody’s perfect” line in the comedy, “Some Like It Hot,” where Jack Lemon (dressing like a woman, because he’s hiding from the mafia) reveals himself to be a man to a guy who wants to marry him (thinking he’s a woman:)

Sessions needs to be sh-t-canned ASAP.

notamemberofanyorganizedpolicital in reply to amwick. | February 3, 2018 at 12:48 pm

“The MsM IS the Democrat Party!”

“Battlefield Earth”… where the media and Dems play the Psychlosians in a melodrama as bad as L. Ron Hubbard’s movie. That is really bad.

What really astounded me about “Battlefield Earth” is that I never dreamed that anyone would stoop to ripping off the plot and the scenery from “Yor, the Hunter from the Future”.

But then “Avatar” was the bastard child of Ferngully and a Yes! album cover, so I guess that’s a left wing hack thing to do.

It’s going to take a new generation of journalists to rinse off that line of work. I can’t call it a profession anymore. Prostitution is also a profession.

Prostitution is a more respectable profession.

notamemberofanyorganizedpolicital in reply to Firewatch. | February 3, 2018 at 12:50 pm

Besides Robots can replace all those “news readers” aka jounalists…..

Here, read the new clinton emails. It’ll bring you back to reality.

I play a boggle game from time to time. You can play solo or join teams. Invariably there’s a Team Resist.

Leslie, look to your right, and look to your left. We are the media, now. Speaking strictly for me, I do not want to be the media, but here I am. If the San Diego Union Tribune would pick its collective head up, look around and notice that it is in as good a position as the Washington Post to report the national (political) news, nobody would care what you write, or I reply.

But LI adds something to the national discussion, and in other locations, its articles are read by potty-mouthed 14-year-old boys. This would not happen, if your own local newspaper (and the rest of the regional newspapers in this country) recognized their true power.

You have looked at the work product of our “news” system over the last month, and noticed the weirdness of it all. You have put it into perspective. Our public discussion needs that perspective because our allegedly professional journolists lost their minds during the last election, and continue in their abject failure to recover.

‘Journalists’ didn’t lose their minds. They lost their souls – much like filmmaker and actress Leni Riefenstahl did in pre-war Germany in the 1930’s) – so she could make movies! (Propaganda films were the MSNBC, CNN, ABC, CBS, NBC of their day.)

“In interviews for the 1993 documentary The Wonderful, Horrible Life of Leni Riefenstahl, Riefenstahl adamantly denied any deliberate attempt to create Nazi propaganda and said she was disgusted that Triumph des Willens was used in such a way.”

“Despite allegedly vowing not to make any more films about the Nazi Party, Riefenstahl made the 28-minute Tag der Freiheit: Unsere Wehrmacht (“Day of Freedom: Our Armed Forces”) about the German Army in 1935.[26] Like Der Sieg des Glaubens and Triumph des Willens, this was filmed at the annual Nazi Party rally at Nuremberg.
https://en.wikipedia.org/wiki/Leni_Riefenstahl

THIS is losing one’s mind:

Actress (and hollywood idiot) jodi foster defends Nazi film-maker Leni Riefenstahl: “Foster however insists that too much is being made of Riefenstahl’s links with Hitler, and that people are missing out on the fact she was a remarkable woman…”

Idiot Foster’s idol laughing it up with Adolph Hitler:

Riefenstahl used concentration camp slave labor in her films (people who were later murdered in the camp.) But hey – the show must go on!

notamemberofanyorganizedpolicital in reply to TheFineReport.com. | February 3, 2018 at 1:10 pm

“Journalists’ didn’t lose their minds. They SOLD their souls..”

Just as Obama and Hillary and almost all the Uni-Party Pols….

“…at least two briefings with reporters, containing five outlets, took place prior to the FBI using the Clinton-Steele dossier in their FISA application.

The “late September” briefings with the New York Times, Washington Post, Yahoo News, New Yorker and CNN took place prior to Christopher Steele meeting with FBI officials early October. The implication therein is that the FBI had to know prior to their October 21st, 2016, court application that the information they were presenting to the FISA court was being heavily shopped to media outlets. This would be immediately disqualifying.

FauxReport playing the Hitler card! Its ironic because if you turn off the sound and watch Trump gesticulating. grimacing, throwing up his hands palm up and lying like a rug, you have a pretty good impression of Mussolini. Really folks, look at him smiling without mirth, marching around and you have someone who learned his stage craft from a third rate Hitler. Enjoy it while it lasts.

Make America Great? He is going to make America into a shithole. But that is OK because you will have fools like FauxReport blaming Obama and the FBI – like they were great buddies.

“He is going to make America into a sh-thole….”

Yes, if you are a communist, islamic fascist or the grotesque nancy pelosi, or – in particular – traitor and disgraced former president barack obama, who is being humiliated by Trump’s success.

Suggest you stock up on toilet paper.

And here are some hitler cards for you to play:

The Clinton campaign paid some very high level cognitive scientists. In conjunction with MSNBC they have literally brain washed a large number of people into an alternate reality.

And she STILL couldn’t win.

What a loser. Thank God.

Maybe she should have hired Vladimir Zouhkov.

If Steven Spielberg couldn’t help her, no one can.

I’ve figured out the transform ..,

Trump Obama goes to the World Economic Forum in Davos, Switzerland. He is praised for being “presidential” when he successfully reads from a teleprompter but is booed congratulated when he criticizes the media FoxNewsas “fake.”

So the rest of Trump’s tenure is going to seem like 94 years to Democrats?

Liberal friend: Did you hear them market went down 600 points?

Me: Yes. It’s going to – with interest rates going up as they should, investors will look to bonds. (Pause.) Aren’t you more concerned about the memo released today about the corruption at the justice department?

Liberal friend: (right on cue, quoting CNN): They shouldn’t have released it, it was damaging to national security!

Me: There was nothing in it other than showing corruption at the FBI and DOJ. (Pause.) Did you read it?

Me: (too stunned in disbelief to talk.)

Liberals will NEVER change – their slavish devotion to CNN and MSNBC and their petty egos will see to that.

Email exchange with GOPe friend, re the Nunes memo:’

GOPe friend: “I’m not altogether persuaded. Carter Page was indeed a bad guy; Trump fired him from his campaign due to his messy Russia contacts. There were independent reasons for a FISA warrant. All in all, seems pretty weak. Detracts from the afterglow of the SOTU speech.”

Me: “If that’s the case, then the likes of crazy pelosi and comey would have welcomed its release. They obviously didn’t. Read this:http://mobile.wnd.com/2017/12/fbi-makes-stunning-admission-about-trump-dossier/

GOPe friend: “It’s not good for the Democrats, but it’s not nearly as good as I had hoped for the GOP.”

Me: “Ok, “not good” is not good – wouldn’t want to be one of the people who this is ‘not good’ for. Watergate was a security guard with a flashlight stumbling upon a situation in a hotel. Almost 50 people went to prison, and a president was forced from office.
http://watergate.info/analysis/casualties-and-convictions
This is just the beginning – which is why the left and its media is going crazy.”

Let Trump be Trump, and the liberals and GOPe be damned: it works for us

Liberals are funny – market goes up for 12 months continuously, they have nothing to say, pretend it doesn’t exist.

Market goes down for one day, and it’s OHMYGOD, TRUMP IS DESTROYING THE WORLD!

as you say, if there’s a reason, its worry that the economy is starting to grow so strongly that inflationary fears are resurfacing, and portfolios are being re-balanced accordingly.

Trying to run away from the Memo!