Captured by Kurdish fighters in Syria, turned over to U.S. Special Forces – will they be brought to trial in the U.S. or kept at Gitmo?

In August 2014, ISIS released a video of the beheading of captured U.S. journalist James Foley.

We covered it at the time, American journalist James Foley reportedly beheaded by ISIS:

ISIS has released a video purporting to show the beheading of American journalist James Wright Foley, who had been missing for almost two years. The video, which also threatens to do the same to a man identified as American journalist Steven Sotloff, will not be linked to on this blog.

Foley had gone missing in northwest Syria in November of 2012, and Sotloff, a reporter for Time, had disappeared in mid-2013, perhaps in Libya. 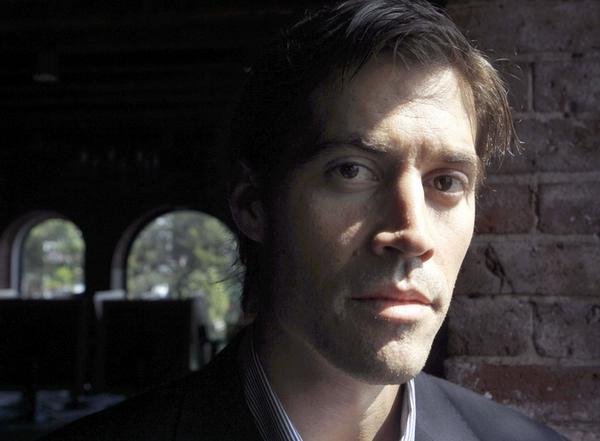 Obama gave a live statement on the release of the video, but then controversially went to play golf.

The video, titled “A Second Message to America,” opens with a clip of President Barack Obama speaking after ISIS beheaded another American journalist, James Foley, last month. Obama vowed in those remarks to be “relentless” when Americans are harmed.

The video then shows Sotloff, wearing an orange jump suit and kneeling, in a sparse desert landscape, next to a black-clad ISIS fighter — a replica of the conditions in the video in which Foley was beheaded.

Speaking to the camera, Sotloff questions U.S. intervention in the Middle East and blames Obama for “marching us, the American people, into a blazing fire.”

The ISIS fighter then blames Obama for an “arrogant foreign policy towards Islamic State” and for refusing to heed ISIS’s warnings and end military strikes. 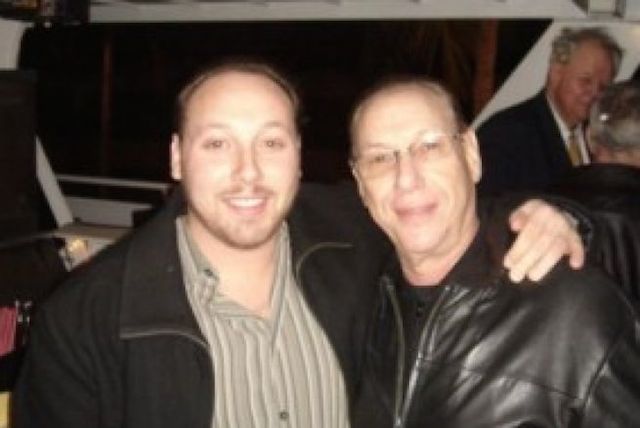 After Sotloff’s execution, it was revealed that his family, the U.S. government and others went to great lengths during his captivity to conceal that Sotloff was Jewish, Hiding Sotloff’s Jewish Israeli Identity from ISIS:

Steven Sotloff, the journalist whose beheading by the Islamic State was announced earlier this week, was not only Jewish, but an Israeli citizen. Apparently Sotloff became an Israeli citizen when he attended the Interdisciplinary Center Herzliya….

His friends, family and colleagues were careful not to publicize any damaging information. But their role wasn’t just passive, they made an active effort to hide any identifying information that his captors could use against him.

The report revealed that a group of 150 of Sotloff’s friends and acquaintances, speaking 20 different languages, teamed up to meticulously scan Facebook posts and tweets for any mention of the Jewish and Israeli connection — trying to keep Sotloff out of harm’s way and save his life the only way they could, from afar.

“We had two missions: To locate all of his friends worldwide — and he had many — and make sure they don’t talk to journalists. In addition, we had to convince journalists who were writing about him to cooperate with us and remove any connection between him and Israel or Judaism, so his ISIS kidnappers don’t find out his background,” the news site quoted one of Sotloff’s friends as saying.

Others details emerged from another hostage who had been released: Sotloff secretly fasted on Yom Kippur by saying he felt ill, and would covertly pray toward Jerusalem by observing which way the Muslims were facing during prayer, and changing the direction slightly.

Peter Kassig was a U.S. aid worker who was executed in November 2014:

Multiple outlets have already reported on ISIS’ latest (and as yet unverified) video claiming to show the severed head of U.S. aid worker Peter Kassig.

The new video does not show Kassig alive, or his alleged murder; instead it shows a masked militant standing next to what he claims to be Kassig’s head, blaming both Barack Obama and Kassig’s own service as an Army Ranger for the brutality inflicted upon western hostages.

The killers who beheaded Foley, Sotloff, Kassig and others were part of a team of 4 ISIS executioners, believed to include British citizens, who were nicknamed “The Beatles.” 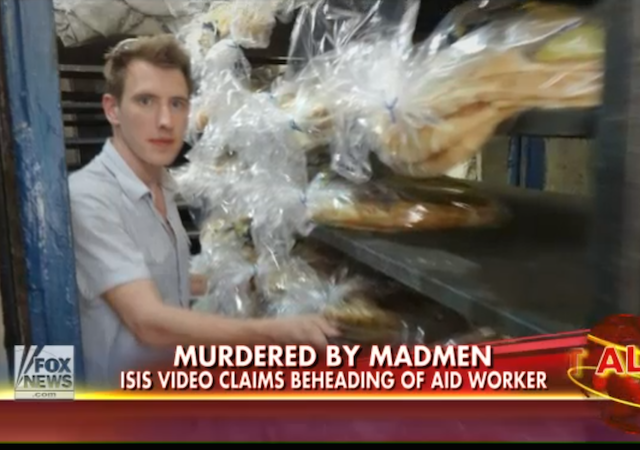 In a strange twist, it was later revealed that anti-Israel, pro-Hamas U.S. lawyer Stanley Cohen had attempted to negotiate Kassig’s release

CBS News reports that two of the executioners have been captured:

U.S. officials confirmed this week that the American-backed Syrian Democratic Forces (SDF) had captured the two notorious members of the ISIS insurgent cell commonly dubbed “The Beatles,” which was known for beheading hostages.

Air Force Col. John Thomas said that El Shafee Elsheikh and Alexanda Amon Kotey were captured in early January in eastern Syria. The two men, both from west London, are among four members of the ISIS cell that captured, tortured and beheaded more than two dozen hostages including American journalists Foley and Steven Sotloff, and American aid worker Peter Kassig….

Thomas, a spokesman for U.S. Central Command, said American officials have been able to interrogate the two detainees. And he characterized their capture as “certainly a big deal for America” as well as the families of the people the two men killed.

While the SDF discovered the two and captured them, the U.S. helped with biometric data and other tools to accurately identify them.

The NY Times further reports on the crimes of “The Beatles”:

The ringleader, Mohammed Emwazi, was killed in an airstrike in 2015 in Syria after an intensive manhunt. Known as Jihadi John, he beheaded American and British hostages. A fourth man, Aine Davis, is imprisoned in Turkey on terrorism charges.

All four had lived in West London. Mr. Kotey, born in London, is of Ghanaian and Greek Cypriot background, while Mr. Elsheikh’s family fled Sudan in the 1990s. Both men have been designated foreign terrorists by the United States.

The British extremists were known for their brutality. They repeatedly beat the hostages they kept imprisoned in Raqqa, Syria, formerly the Islamic State’s self-declared capital, and subjected them to waterboarding and mock executions. Mr. Emwazi was believed to have killed the American journalists James Foley and Steven Sotloff, as well as Abdul-Rahman Kassig, an aid worker. The American government says the group beheaded more than 27 hostages.

Will they be brought to the U.S. for trial, or be taken to Gitmo, which Trump has pledged to keep open?

US or Gitmo? Why not some sealed small dark cell with a trickle of water and occasional rat to eat raw? First extract all the intel possible.

and don’t let them know the direction for mecca.

Clearly, the only humane solution for these undocumented immigrants is a path to citizenship along with a state-provided Islamic para professional.

notamemberofanyorganizedpolicital in reply to broomhandle. | February 9, 2018 at 5:40 pm

Oh! Then what Horrors to see this on CNN.

“CNN: These “Dreamers” Are Threatening to Leave America if They Don’t Get Their Amnesty”

……stands out in such contrast to our Kannuck neighbors to the north…….

TheFineReport.com in reply to notamemberofanyorganizedpolicital. | February 10, 2018 at 2:18 am

Trudeau is an incredibly stupid man.

And the little swinger is probably being blackmailed, like rubio and boehner, if not mcconnell.

notamemberofanyorganizedpolicital in reply to TheFineReport.com. | February 10, 2018 at 3:22 pm

Notice how the Globalist Suga’ Daddies erected (not elected) “Pretty Boys” in the U.S., Mexico, and Canada……..

“Incredibly stupid” as you say,
and incredibly black-mailable IMO.

Why not let the Kurds try them. I’m sure they’ve sinned against the Kurds as well.

I would think they’ll end up tried in the UK. They are Brits and they killed as many Brits as Americans.

Trump’s Orders should be Straight to GITMO for Military Trial. best bet is DoS Gives them to UK, UK Trial gets 7 years, given amnesty, they die in a drone strike.

Did they start singing “Help!” ?

I’m in favor the return of the drum head court martial.

Just KILL them on the battlefield.

Call it collateral damage, and be DONE with it already.