The Hill is at it again: Misleading Headline, Gun Mania Edition

The Hill is at it again: Misleading Headline, Gun Mania Edition

There is a fine line between clickbait and misleading headlines. 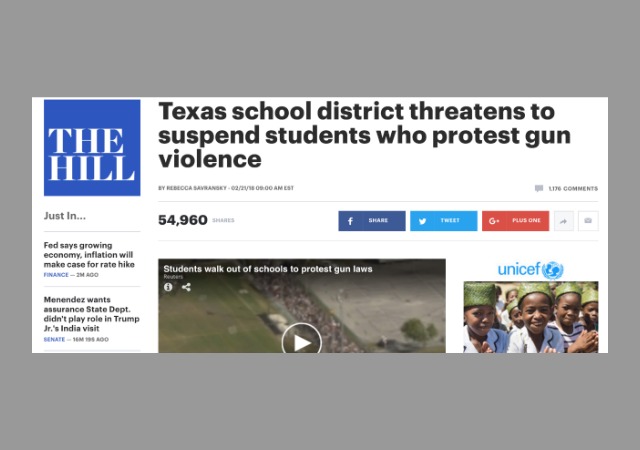 Wednesday morning, The Hill published a story entitled, “Texas school district threatens to suspend students who protest gun violence”. Except it’s a statement that wildly mischaracterizes the story by omitting a key piece of information.

The story reads as follows:

A superintendent in a Texas school district is warning that students will be suspended if they cause any disruptions to protest gun violence.

Needville Independent School District (ISD) Superintendent Curtis Rhodes said in a letter that was sent to families and posted on social media that students would be suspended for three days if they took part in the protests happening following the deadly Florida high school shooting, The Houston Chronicle reported.

In the statement, Rhodes said that Needville ISD is “very sensitive” to violence in schools.

And then they get to the part that makes the headline far less inflammatory, and essentially, a nothing-burger:

“Please be advised that the Needville ISD will not allow a student demonstration during school hours for any type of protest or awareness!!” Rhodes said.

Skip school, get suspended. Nothing too out of the ordinary there.

Headlines are challenging. With so much news coming from a plethora of sites, how do you effectively communicate key points of a story, keep it brief, and make an article interesting enough to earn attention? These are questions we deal with all day every day. That said, there are plenty of ways to easily convey the gist of a story without leading a reader to believe something incongruent to the facts. Not all outlets are quite so careful.

There is a fine line between clickbait and misleading headlines.

This has been a rough few days for the media at large. Their two favorite subjects: gun control and Russia mania are eating up all the headline space. Rather than step carefully and judicially deliver facts, they’ve made fools of themselves.

CNN’s Chris Cuomo tweeted a completely false story based on an internet meme, then lied about it when confronted.

CNN tracked down an old lady in Florida and harassed her about her pre-election Facebook activity, coming one step short of accusing her of colluding with Russian agents. All of this happened in her front yard.

And Newsweek was forced to retract a story about Franken’s resignation, which suggested Franked was taken down by a bot network (Spoiler: he was not).

You will note none of these outlets are conservative-friendly.

This, dear media, is why everyone hates you.

You will note none of these outlets are conservative-friendly.

That is fair statement about The Hill for the most part. But for others like CNN or Newsweek that is a massive understatement.

The Hill has become the abode of crackpots and juvenile ignoramuses. Just reading the comments section will make you not want to go back.

Saw a comment today aimed at these newly “woke” kids.

To the kids demanding new gun laws, YOU ARE AS LETHAL AS THE SHOOTER WHEN YOU TEXT WHILE DRIVING.
Did the LAW stop you?

There is a difference between negligent actions (even if deliberate) and premeditated murder.

Probably not to the person who is killed!

A deliberate negligent action? That sounds a little like double speak to me.

Just making a distinction about the degrees of negligence. Just recently a homeowner killed a hunter from a distance because he thought he was shooting at a coyote. The hunter was actually hunting coyote and using some kind of electronic coyote call. The death shot was a deliberate act, but clearly not to kill a human. The negligence to me was in not having a clear view of the target before shooting, to confirm.

Of course there is. One is called (variously) Murder in the First Degree, Capital Murder, Premeditated Murder, etc. The other is called Manslaughter in most states.

NRA participants in CNN townhall booed and jeered… natch… So much for decorum. Plus extra points for Dem sheriff and Rubio.

If you want a real eye opener, then please read https://theconservativetreehouse.com/ 2018/02/21/its-too-late-broward-county-school-board-beginning-to-admit-their-mistakes/#more-146133 (Remove the space for the link to work.) In this article they document how school officials in Florida did all they could to ignore and hide the violent and illegal behavior of “troubled” students like Cruz in an effort to make their numbers look better. By actively denying the criminal and clearly troubled behavior of students like Cruz, they ensured that he would never be arrested or forced to take responsibility for his own actions which would have landed him on the lists prohibiting him from buying a gun. Essentially, the policies of the Broward County school system created the conditions that led to this terrible shooting, but no one is speaking up about it.

The school district in Florida did not report that Trayvon Benjamin Martin was under suspension from school(during his assault of Zimmerman)because his school locker was found to contain burglary tools and the proceeds from what appeared to be from a dozen break-ins throughout the local community.

That didn’t go too well either. I don’t know what the solution is for our schools but I do not think a solution is even possible when schools have abandoned basic education for indoctrination and Social Experiments.

Paul,
This is an outstanding post. I never knew about this aspect of Martin’s situation. This would confirm that he could indeed be ‘the son’ that Oshitbag longed for.

Maybe you also didn’t know about the much spoken about Skittles & Arizona Iced Tea which were mockingly spoken about in the media. Remember the protesters wearing Skittles wrappers on their foreheads? Trayvon posted much on social media in reference to his Skittles, Arizona Iced Tea, Robitussin = ‘Drank’ Or ‘Lean’. Lean is the intoxicating drink mixed by kids to get high. I can’t say for sure but I doubt his purchases of Skittles & Arizona Iced Tea were as innocent as media made it out to be. It was never investigated as to the availability of Robitussin at his father’s girlfriend’s house in Zimmerman’s neighborhood. So his father was supervising Trayvon while he was on suspension for having burglary tools in his school locker while the kid was stoned and buying two of the ingredients for his favorite Lean drink in a neighborhood that was so plagued by burglaries that there was a Neighborhood Watch formed of which Zimmerman the victim of Trayvon’s attack was a member.

Is any organization awarding points for assaulting the news media on your property (or not)?

Federal Govt. arrests, fathers, mothers, teachers and saints for Saving the Planet …while sabotaging major gas pipelines impacting the flow of 15% of the USA’s natural gas supply and putting large areas and innumerable people at risk of great injury and death due to the unregulated fluctuation in high pressure gas pipelines and mains by their actions.

Yeah when I was a kid I would have cut school to protest for World Peace but I never believed the school administration would give me a break. It seems that many adults feel that they can ‘protest'(riot, arson, assault, block highways and intersections shoot police and throw bricks at emergency services) at any time in any place without consequence as long as they are putting forth their motives as ‘righteous’.

I believe in law and order and with regards to education, we should at least pretend the kids are learning the three R’s in school(by and large the kids are not) and attending classes.

The main stream media is the propaganda wing of the Commiecrat party.

I thought it was the other way ’round – the Democrats are the political arm of the MSM. Works either way.

I know this rag, I started posted there since it was supposedly objective but it is clear not that it is Media Matters light. They will issue a “time out” for daring to retaliate to the attacks by the primarily gay mafia clientele. So conservatives are confined to Breitbart, Daily Caller etc. Go anywhere else and you are rigorously hassled. As far as their reporting, even much worse than this example. Heavily biased.