There is only one word for this: disgusting. 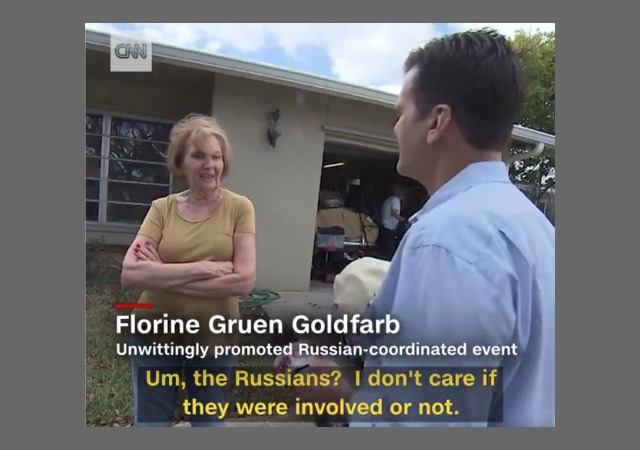 Russia mania has infected the minds of many otherwise rational adults, which has to be the only explanation for this godawful “report” by CNN.

Tuesday night, CNN posted a video of reporter Drew Griffin harassing an elderly woman, at her own home, mind you, over her pre-election Facebook activity. Griffin alleged Florine Goldfarb’s Facebook group was unknowingly interacting with Russian trolls (those cited in the recent DOJ indictment).

Goldfarb clearly had no clue what Griffin was talking about, nor did she believe she had any interaction with Russians, saying she personally knows everyone in the group and that each of them are (and was) bona fide Trump supporters. Griffin relentlessly insisted she engaged with Russian trolls, all but insinuating she herself was colluding with Russians, leading Goldfarb to walk back into her house.

A Florida woman who ran a Trump supporters page that unwittingly promoted a Russian-coordinated event on Facebook says she doesn’t believe that she was influenced by Kremlin-linked trolls https://t.co/DmgDRFRwyn pic.twitter.com/OAz5julCyA

The internet was equally unimpressed that CNN took the time to track down a private citizen at her own home to harass her about her social media activity:

Lost respect for @DrewGriffinCNN over this hack job. Harassing an old lady who, whether or not her group was targeted by Russian trolls, obviously had no idea she was dealing with Russians. https://t.co/x9NCAxAWsI

The guy basically asks her if she’s a Russian spy on her front lawn. pic.twitter.com/1G12BdSO1M

CNN tracked down a random old lady and started pestering her about why she promoted an event on Facebook.

This is almost as bad as when they blackmailed a random reddit user. https://t.co/nIijbwVO3a

For her crime of being politically active and supporting a presidential candidate, Goldfarb’s Facebook account, thanks to CNN, has been overrun with all manner of nastiness:

A sampling. And these are in response to a post promoting a candlelight vigil for victims of the Florida school shooting: 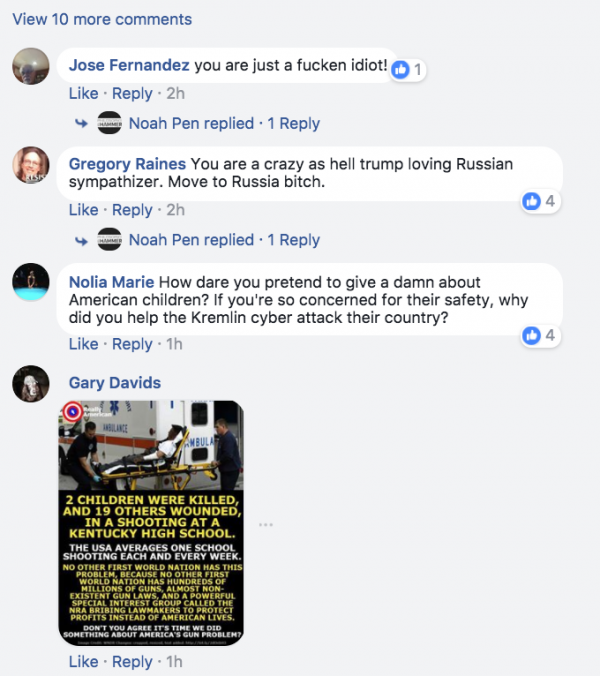 These are posted beneath a video telling the story of a baby found in a truck bed who was adopted by a cancer survivor unable to have children of her own: 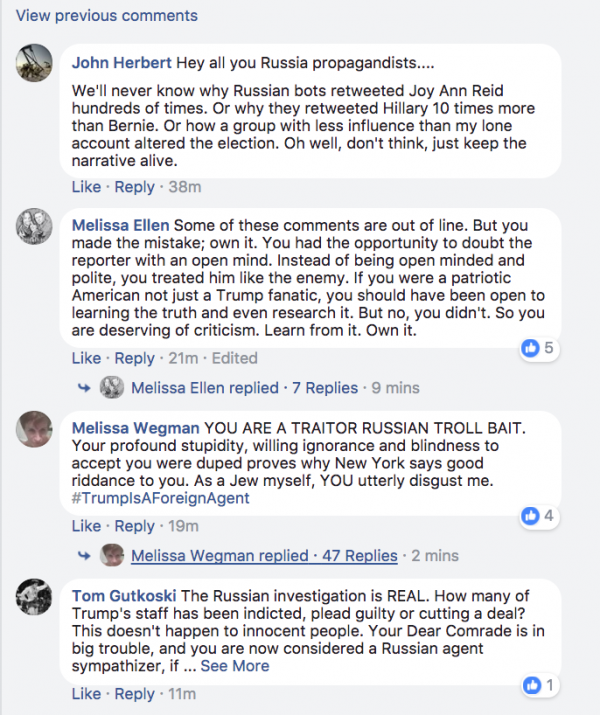 And a few others:

Take a look at her FB page and get back to us pic.twitter.com/gK78ChysNQ

There is only one word for this: disgusting.

Man oh man, is the left pulling out all the stops for this midterm or what? Really makes me wonder what we are going to see in the next few months, and is definitely a preview of what is to come.

As I watched the left’s reaction to Hillary’s loss I knew we were headed for ‘interesting times.’ Each day that passes makes me more certain.

Here in Charlotte there was a big Hillary rally featuring some local Muslim leaders. The local news interviewed them but never attacked them. The leader said basically – we did not know but it does not change the way we feel.

I think they will abort/recycle a baby, perhaps two, three, of diverse character: black, white, brown, yellow, on a prime time news broadcast to reassure women that they are Pro-Choice and support [mass] abortion rites. Think of the children!… or something.

Sometimes I just want to jump through my computer and grab some reporter by the throat. Usually when I see the word “CNN” I move on to another story hoping it will be about California sliding off into the Pacific

Is this surprising? These are the same people who harassed a meme creator.

Let’s try this again without the hickup. CNN is fomenting a civil war in this country. Plain & simple.

They certainly are puppets of the apparatus pulling the strings.

And they’ll be the first to be murdered by the fascists they are enabling if those fascist gain power in this county, as is the pattern in every fascist takeover of a nation.

“Are you now, or have you ever been, a member of the Communist party?” McCarthy lives. CNN is the worst.

CNN is still trying to excuse their billion dollar trolling campaign to influence the election, overturn the result, and sabotage the President.

I disagree: Methinks CNN is quite proud of their efforts in each of what you describe.

And why not? They’re heroes in America’s leftist cult.

Next they will be all over the “Muh Russia” jokes at The Donald at Reddit as proof — FROOF! I say! — that DJT is, in reality supported ONLY by Russian bots.

Never mind that the giddy kiddies have been laughing about this nonsense for months.

Of course, if you ask them, they will tell you that the activities of the State Department under Hillary Clinton in response to enormous transfers of funds to the Clinton Foundation show real pay-to-play collusion with the Russians and others.

All of this noise is an attempt to draw a false equivalence with the corruption of the Democratic Party at the national level.

Meanwhile the Obama/Clinton/DNC axis are enjoying the fruits of their labor from colluding with domestic and foreign assets from Mexico to Kiev and nationals from Russia. Did they really believe that they could pull another Libya in Russia?

Proverbs 23:7 King James Version:
“For as he thinketh in his heart, so is he: Eat and drink, saith he to thee; but his heart is not with thee.”

Fake news is, as fake news does. They are no longer “Americans.” They’ll soon come up with another name for themselves in their separatist movement. Maybe it’s time we part ways. It’ll be a win-win — for us, not them. (Imagine the hell-hole of nation run by the democrat party, with zero financial support from the rest of us? Call it “The Peoples Republic of Baltimore.”)

You are correct.
Oh, and there is this scripture as well:

“There are six things that the Lord hates, seven that are an abomination to him: haughty eyes, a lying tongue, and hands that shed innocent blood, a heart that devises wicked plans, feet that make haste to run to evil, a false witness who breathes out lies, and one who sows discord among brothers.”
—-Proverbs 6:16-19

Is that obama, hillary klinton or george soros?

The Three Jackasses of the Apocalypse.

Did they also track down the one’s who promoted the “Trump is not My President Rally” and ask them why the were aiding and abetting the Ruskies?

..or interview attendee Michael Moore to inquire about his feelings on being a Russian dupe!

It might work well in dueling circles, but not in a war with leftists.

That only works on people with a sense of dignity.

It appears that now that Obama is out of office CNN wants to replace him as “AR-15 salesman of the year.”