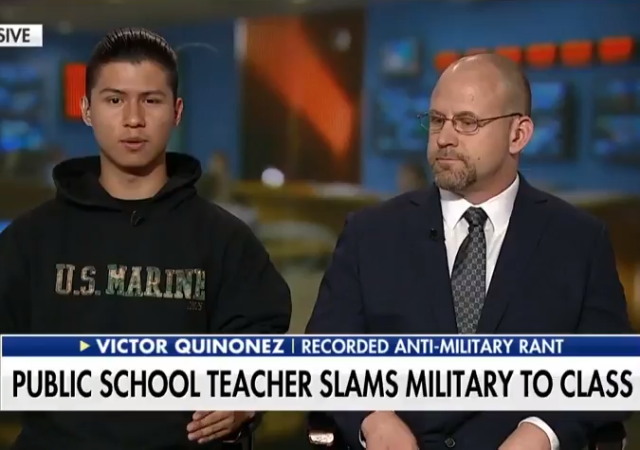 We recently ran a post about California history teacher Gregory Salcido, who has been placed on leave for saying incredibly offensive things about members of the military.

Victor Quinonez, the student who recorded Salcido’s rant, recently appeared on FOX and Friends with his lawyer who said Victor and his family are now getting death threats.

Victor Quinonez, who aspires to join the U.S. Marine Corps, used his cell phone to capture his teacher, Gregory Salcido, slamming service members as the “the lowest of our low.”

Salcido, who also serves as a city councilman, ranted to students about why they should not join the military.

“Think about the people who you know who are over there. Your freaking stupid Uncle Louie or whatever. They’re dumbs‑‑‑s. They’re not like high-level thinkers, they’re not academic people, they’re not intellectual people. They’re the lowest of our low,” he said.

Quinonez, a high school senior, recounted how the events unfolded, explaining that Salcido took offense to him and one of his classmates wearing Marines shirts.

He said Salcido then made him explain in front of the whole class why he wanted to join the military. Quinonez told him it was a proud family tradition that he intends to carry on.

“He told me, ‘if it was a family tradition to beat women would you continue it?'” Quinonez recalled…

Trevor McCardle, an attorney who volunteered to represent the Quinonez family, said there have been death threats directed at the family since Quinonez spoke out.

White House Chief of Staff John Kelly, a retired general, was recently asked for his thoughts on Salcido’s comments and gave a rather frank answer. CBS News reports:

White House Chief of Staff John Kelly: Teacher “ought to go to hell” for bashing military

President Trump’s Chief of Staff John Kelly had some tough words for a teacher caught on video bashing military service members in a high school classroom. “Well, I think the guy ought to go to hell,” Kelly told Fox News Radio on Wednesday after hearing audio from a video posted online last week of a California teacher calling members of the military “the lowest of our low.”…

The former Marine Corps general is a staunch advocate for the military, notably coming to the president’s defense when a member of Congress said she had listened in on a phone conversation between Mr. Trump and a widow of a service member killed overseas where the president allegedly made insensitive remarks.

The only thing that worries me about all of the looniness from the mouths of administrators and teachers from nursery through secondary levels is the way they appear to feel so free from consequence. They are essentially ensconced in this educational system cocoon and fear nothing as long as they have the right ideology.

I get tenure at the university levels protects them even more. But we see evidence of elementary, middle school, etc. teachers with the same confidence and bravado.

And it only worries me because it’s a sign they believe they have essential control of the institution. Otherwise they would have even moderate apprehension.

“They are essentially ensconced in this educational system cocoon and fear nothing as long as they have the right ideology.”
————

What is also scary is that this Leftist groupthink ethos that was once the nearly-exclusive province of academia is now swiftly permeating corporate offices and Boardrooms, as well as the media and previously apolitical spheres of entertainment and culture. Where, predictably, in true Orwellian fashion, under the guise of the propaganda buzzwords of “diversity” “inclusion,” we are seeing certain groups selected for favorable treatment, on the basis, of gender, sexual orientation, racial composition, etc., while certain other groups, notably conservatives, are being ostracized, marginalized and forced out. We saw this behavior at Alphabet, most prominently, but, we’re also seeing it in the finance industry, where investment management heavyweights Blackrock and State Street have both signed on to self-aggrandizing and self-congratulatory Leftist movements to put more women on corporate Boards, via an insane quota system. Merit and experience become secondary in such a scheme — these twits believe that it’s more important to assess a Boardmember’s genitalia, first, before giving consideration to their other qualifications.

What happens in academia doesn’t stay in academia. The communists were very clever in taking over education. We are now seeing the results.

No one lives beyond the invisible hand. Do your part and squash it. Everyone has the power to stop this if they want. If you are alumni don’t send money, if you are a parent don’t send your child, if you are in the position to hire, find a better candidate.

When we don’t feel like a degree is necessary to get a job then we can be free of this stupidity.

Public school teachers also have tenure, and in a number of ways it’s better than that received by university faculty. In the Chicago area, teachers get tenure by their third or fourth year in the system, and good luck trying to get rid of them after that. I bet California is similar.

Actual death threats. Not the fantasy psycho BS the left makes up.

well in today’s world you ain’t anybody until you’ve gotten a real death threat. Even I’ve gotten a couple of those over the years, and I’m nobody.

Never bothered me much, I just figure that’s what concealed carry is for.

The embittered contemporary Left has descended so far into a bottomless abyss of infantile spite, jack-booted totalitarian intimidation tactics, ceaseless vilification of law enforcement, military servicemembers, Christians, Jews and other Americans who worship differently, who hold political beliefs at variance with Leftist orthodoxies, who are alleged to possess more than their “fair share” of wealth, or, who simply live in the allegedly unenlightened environs that lie far away from the bastions of self-congratulatory, self-perceived intellectual and moral superiority (L.A., San Francisco, Seattle, Portland, Chicago, Boston, New York and Washington, D.C.), that there is no available path back towards rationality. The centrist, consensus-rooted policies of JFK and Bill Clinton would effectively be considered Republican policies by today’s Dumb-o-crats, to be vilified and undermined, accordingly.

In fact, I would go so far as to submit that there exists a Dumb-o-crat Party in name, only, a label which actually inaccurately describes the Party’s radical Leftist governing ethos and sensibilities.

What we are witnessing is what happens when Leftist radicals take over a political Party and eviscerate all moderating and tempering influences that might instill some modicum of rationality and decency. The Dumbs’ inability to even summon a scintilla of sympathy and empathy for the parents attending the SOTU address whose children were brutally murdered by illegal alien gang members, was only the latest manifestation of this radicalism, but, we’re seeing plenty of other examples — total Leftist indifference to the truly brazen and lawless abuse of the FISA Court warrant process to spy on political opposition; the IRS’s targeting and hindering of, conservative and pro-Israel non-profits; the vile Obama’s quashing of DEA efforts to dismantle Hezb’allah’s multi-billion-dollar operation importing cocaine into American cities; etc., etc.

Ironic from the anti-military crowd to go death-to-enemy on this guy. Ironic …. and moronic.

Liberals, Progressives, and, unfortunately, Libertarians, are Pro-Choice. They believe in holding abortion rites of lives deemed unworthy for casual, elective, and profitable causes. The Left has been a leading voice and cause of wars and conflicts throughout the 20th and 21st centuries.

Why ironic? They’re not against killing, they’re just on the other side.

The fact that this young man is now receiving death threats from other students is one more in a laundry list of examples of how politicized government indoctrination centers have become. Kids don’t care about politics, so obviously social engineering has replaced actual education.

Parents, make whatever sacrifices are necessary to get your kids out of these indoctrination centers and HOME SCHOOL! This is truly a battle for the heart, mind and soul of your child.

We have the most expensive education system in the world, and a product that is not even in the top 10. We have made extraordinary progress in less than a century.

Ignorant assholes teaching our kids, it is so repugnant.

I once got into trouble for making this observation: if you took all the college grads and lined them up single file by an index that combined IQ and GPA, at one end of the line, far, far in the distance, would be the elementary education majors. And right next to them would be the J-school grads.

“…there have been death threats directed at the family since Quinonez spoke out.”

This is a sad state of affairs, but I’m not surprised. The left always, eventually resorts to violence or threats of violence when exposed for the tyrants and haters that they truly are. Always.

So much for this bald headed La Raza poster boy. If anyone lays a hand on Mr. Quinonez, in any manner, it will be because of Mr. Salcido’s unbridled hatred.

I think Mr. Salcido has had little experience of military people, who in general are highly intelligent and skilled.
I wonder if he has even pondered for a moment the knowledge required in the engineering section of any ship in the Navy, or, for that matter, to employ a tank platoon successfully. Let alone what the crew of an F-18 or F-22 has to know and be able to do to keep it in flight …

Not only is Salcido a classless dullard, he has become the face of that school and the school district. The freak is an embarrassment to his peers and community. A bigoted hateful and bitter miscreant in the full meaning of the word.

I’d like to point out to Mr. Salcido these things about the military —

90% of commissioned officers have a college degree, versus 30% of the general population.

Half of our non-commissioned officers have a college degree.

A higher percentage of our commissioned officers, compared to teachers, have an advanced degree.

When it comes to education, our military is well ahead of the general population, and ahead of teachers. He should consider that.

And, generally, military people do not have degrees in Education, Journalism, or grievance studies.

The teacher should be frog-marched out of the school and fired, and the student (Victor Quinonez) should be met at his home by a Marine officer in dress blues, holding recruitment papers. (And of course, videographers to document both of the above.)

aside from the anti-Marines / anti-Military rant, this “teacher” was bullying a high school student. that alone is immediate grounds for FIRING.

Death threats to a future Marine? That doesn’t sound too smart to me.

A lot of people on the left honestly believe what he said, and think it’s something everyone knows and accepts as the truth. They don’t even realize that anyone would object to it. That’s how John Kerry got in hot water, for instance; he didn’t think he was saying anything controversial, and couldn’t understand it when it became an issue. Even when he apologized I don’t think he understood why he had to, what he’d said wrong; he just did it because his advisors told him to.