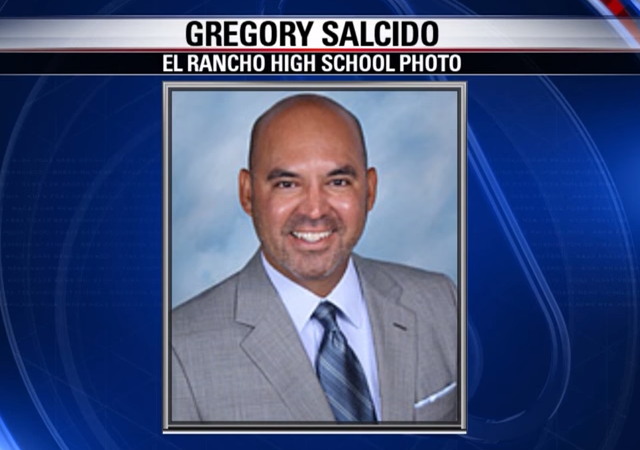 A Pico Rivera city councilman and high school history teacher named Gregory Salcido is under fire after being captured on tape making incredibly insulting comments about members of the military.

FOX News has the details:

A video in which a Southern California high school teacher is heard slamming members of the military as “the frickin’ lowest of our low” in a classroom rant to students has gone viral.

El Rancho High history teacher Gregory Salcido — who also serves as an elected Pico Rivera city councilman and was once mayor — even goes so far as to refer to those who are in the military overseas as failed students who had no choice but to serve, “Fox & Friends” reported Sunday.

“Think about the people you know who are over there,” Salcido is heard saying. “Your freakin’ stupid Uncle Louie or whatever. They’re dumb s – – – s. They’re not high-level bankers. They’re not academic people. They’re not intellectual people.”

“They’re the freakin’ lowest of our low.”

He is also heard questioning why military recruiters were allowed to visit the school.

“We don’t allow pimps to come into the school,” he says.

A post on Facebook with videos of the rants had nearly 1.5 million views as of Saturday, the Orange County Register reported.

This all began due to a student in the class wearing a Marines t-shirt. That student is the one who ultimately recorded the comments and posted them on Facebook where they went viral:

The student wants an apology for himself, soldiers and veterans.

Here’s a video report from the FOX News Channel:

Here’s another from the local FOX affiliate:

In addition to being placed on leave from his teaching position, Mr. Salcido has also been removed from his city council duties. CBS News Los Angeles reports:

Officials from a Southern California city are roundly condemning disparaging comments made about members of the U.S. military by a local teacher.

In a statement released Monday, city officials said they “unequivocally disagree and condemn” Salcido’s comments, adding, “The city Council and residents of Pico Riviera are steadfast in the recognition that the contributions by those who have served or are currently serving our country via military service are respected and we are grateful for their service.”

According to CBS2’s Randy Paige, Salcido has since been removed from all committees on the Pico Rivera City Council over the remarks and that other fellow council members are “unanimous in their condemnation” of his remarks.

I reached out to author, Townhall columnist and retired Army Colonel Kurt Schlichter for comment:

“I feel sorry for him. He’ll never know what it is to be one of those people he looks down on.

Those of us who are able to serve feel honored to do so at all. The idea that I would spend one second of my time caring what this person said when I could be cherishing the people I was allowed to serve with. Why would I give him the time?

This guy says what a lot of leftists really think. They hide it because it’s socially repulsive, but he speaks for a lot of liberals. I’d suggest he be ashamed of himself but that assumes he knows right from wrong. He deserves our contempt but also our pity. He can only say these stupid things because of the efforts of better men and women.”

Invite the commie lib teacher to one term of basic training…Army or Marine.

ROTC or CAP (for high school kids) is probably handy. The problem would be to get this close-minded fool to open p his closed mind and observe without disruption.

What’s wrong with Navy or Air Force boot camp? I can guarantee you that the instructors there could hand this guy his @$$. Because they know more about psychology than anyone he’s ever met.

“He can only say these stupid things because of the efforts of better men and women.”

The best education system this country has is in its military. Our military knows how to teach people to think and act independently and in co-ordination under the worst of circumstances. The California school system has a lot to learn from them.

This is ONE that got caught, outed.

Exactly, he was simply repeating part of the mantra of standard liberal orthodoxy. His mistake was that he let his power over his students go to his head, and he forgot that this is one of those things that liberals are only supposed to say to each other, and NEVER say to the public.

Much like their deep hatred for the Constitution, and for the United States in general.

My family just received a letter from a friend that is in Army basic training at present. Dated last week before this incident, he stated that there is an irony that he didn’t go to college but yet he has been studying his rear off. As far as the teacher, I’m not impressed by those that think they know how others live. Typical Lib 🙂

In some branches of our military, minority participation is quite high. We need to ask salcido if he is talking about these women and minorities as “lowest of the low”.

This man deserves our pity and our understanding, as well as an early retirement without pension due to unemployability. Oh, and a severe beating administered through low blows from the lowest of the lows.

Really, only the crushing poverty and severe beating are important to me.

True! So we could call him racist.

France should be thankful of the Americans in WWII since their native language would be german today.

Funny. I have a Masters in English, medieval lit, and joined the Marine Corps to defend Arthur’s Dream that Might can be channeled for Right. Infantry 0313.

Did just that in Somalia. VC for a section of LAV-25s. We hunted down bad guys who stole Red Cross medicine and food meant for the villagers they were oppressing.

Ever called in an air strike? You have to imagine a 6 digit grid oriented over a terrain map. Get arty to mark the target then do some geometry on the back of a MRE pack with a broken pencil to deconflict ingress and egress of the multimillion-dollar aircraft so it doesn’t intersect with your artillery round.

And you have to do it yesterday, under fire after 24 hours without food and 48 without sleep.

No do overs. You screw it up and people actually die. Innocent women and children. Your own platoon mates. And even yourself.

But yah, I must be stupid. Because some pussy pos is mouthing off because he’s ashamed he doesn’t have the courage or selflessness to do what I do.

You know you could have just said “I’m more intellectual than this guy and I could woop his ass with a popsickle stick and a dixie cup while praising God and saluting the flag, but rant on brother. Rant on.

He didn’t say it like that because he’s not the leftist stereotype we all see in the movies, though I’m sure what you say is true.

Thanks for your service, Fen.

This guy says what a lot of leftists really think. They hide it because it’s socially repulsive, but he speaks for a lot of liberals.

A lot of them don’t hide it, because they genuinely think it’s not only true but completely uncontroversial, like saying the earth is round, or that the sun rises in the east. They’re unaware both that it’s not true and that anyone objects to it, let alone finds it “socially repulsive”.

Think back to when John Kerry openly expressed this opinion. He didn’t think he was saying anything controversial. He was astonished at the sh*tstorm that hit him. I’m sure his first reaction was “what did I say?”, and someone on his staff had to break the news to him that what he thought was common knowledge is actually false and offensive.

These people don’t know who they are dealing with. It’s essentially an entire team of scholar athletes. I served with men who had PhDs. Who could haul you up three ladders to safety.

They can say what they want. It’s why we serve, right? And we who have served or or serving have the right to laugh.

We are in the mess we are in as a civilization largely due to the efforts of “intellectual” people.

Funny, but intellectuals are first ones to buy it in fascist revolutions:
https://en.wikipedia.org/wiki/Anti-intellectualism

But this clown is safe: he’s no intellectual. At best, he’s an obama.

I don’t view high school teachers as intellectual as a group. Most are not very academic either.

Reminds me of my grad school days while working on my MBA. We shared the same breakroom as the teachers working on their masters in education. The size of the intellectual gap was both stunning and appalling.

Even if he were teaching the greatest class in the history of high school, I would still be stunned by the casual profanity. Surely the language itself is fireable, right?

Profanity ia what a weak mind uses to express ideas.

He would likely not even BE a teacher were it not for his status as a protected minority.

Listen, lunatics like this are infesting our schools: they hire each other and blacklist normal people from jobs.

WE TOLERATE THIS. IT IS OUR FAULT.

My son studied political philosophy at Kenyon and then earned an MBA. Then he enlisted in the Army as an officer and is now a captain. How does this compare to a know-nothing high school teacher, no doubt protected by tenure, and who has managed to become a local political hack.
With these stellar accomplishments, I’ll wager he was for Bernie.

I hope he looses his job … what a jerk …

Here’s a military ritual we should introduce this slimeball to:

The entire Democrat Party was seen nodding in agreement.

Yes, Salcido is an American name. Just like Benavidez.

It’s not the name that makes this idiot an idiot.

Take a look sometime at the names of our Border Patrol agents.

I give you the Pied Piper of Saipan. I’ve served with Americans of Mexican or El Salvadoran or whatever heritage you might imagine. They like the Border Patrol agents don’t have dual loyalties. They would have run into a burning space for me. So please shut up.

I have not forgotten what Roy Benavidez stood for.