Media almost always only identifies Painter only as G.W. Bush’s former Ethics director, not his current position with CREW. 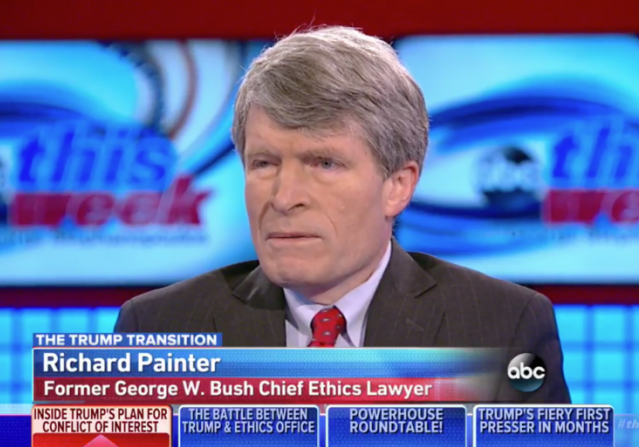 In July 2017, I wrote about a rising star in the anti-Trump media, Stop taking Richard Painter seriously given history of outlandish statements and treason accusations:

Richard Painter is the Vice Chair of Citizens for Responsibility and Ethics in Washington (CREW), a left-wing activist group.

In December 2016, Painter replaced in the position of Vice Chair … wait for it … David Brock. Yes, that David Brock, the consummate Democratic oppo-research attack dog, leader of Media Matters, and now American Bridge. That David Brock was Vice Chair of CREW tells you everything you need to know about the group.

But you will almost never hear this part of Painter’s resume when he appears on TV, which he does quite often. You might hear that he’s a professor at U. Minnesota Law School. But most of all, you will hear that he is a former George W. Bush administration Chief Ethics Lawyer (2005-2007).

But in the age of Trump, his entree to TV commentary has been relentless Trump bashing — there is nothing the media loves more than someone who served in an Republican administration but now attacks Trump.

And Painter’s main TV role is to attack Trump in outlandish terms. I never heard of Painer — and I bet you never did either — until he started fulfilling the TV role of attacking Trump.

Painter continues to be the most visible face of CREW, along with Chairman Norm Eisen, Obama’s former ethics “czar.” A Republican and a Democrat, having served Republican and Democrat presidents, respectively, give the appearance of CREW being non-partisan.

But as The Free Beacon documents, it’s all a charade, enabled by a stubborn mainstream media refusal to identify Painter and Eisen’s CREW connection, and the true nature of CREW.

CREW bills itself as a nonpartisan organization looking at ethics violations on both sides of the aisle. However, the organization was once led by Clinton operative David Brock and is an approved funding group of the Democracy Alliance, which helps guide donations from wealthy liberals to anti-Republican activist organizations.

The Free Beacon’s analysis, which examined footage from Nov. 1, 2017 to Feb. 1, found that Norman Eisen, the chairman of CREW who was previously an ethics “czar” for Barack Obama, appeared on CNN, where he is a contributor, and HLN at least 19 times. However, he was identified as leading CREW at the start of an interview just three times.

Eisen, who was mainly introduced as the former Obama White House ethics “czar,” did not make any efforts to disclose his position with CREW when anchors had failed to mention them.

The statistics are worse when it comes to Richard Painter, the vice chairman of CREW.

Painter, a self-identified Republican who served as a White House ethics lawyer under George W. Bush, has been a vocal Trump critic since the 2016 Republican primary.

Painter, CREW’s vice-chair, joined the organization in late 2016 when it was led by David Brock, the liberal operative and Clinton loyalist who founded Media Matters. Painter’s political affiliation gave the organization a patina of bipartisanship as it ramped up efforts to oppose Trump in the media and in courts.

Painter conducted at least 68 interviews on MSNBC, CNN, and HLN and was only twice introduced as part of CREW during the same time period Eisen made his 19 appearances, the analysis found.

In nearly every other instance, he was only introduced as some variance of the former White House ethics lawyer for Bush, a position that he left nearly 11 years ago. Painter also failed to disclose his current position on air when his current title was not mentioned.

I often tweet at publishers about the failure to properly identify Painter’s current position, to no avail.

.@TheHill has become publicist for Richard Painter, always highlighting a position he had a decade ago, ignoring his current position of Vice Chair of #TheResistance group CREW, a position he took over from David Brock (yes, that David Brock) https://t.co/lvZtEbhpKi

CREW was transformed after Brock took over into the legal arm of The Resistance. 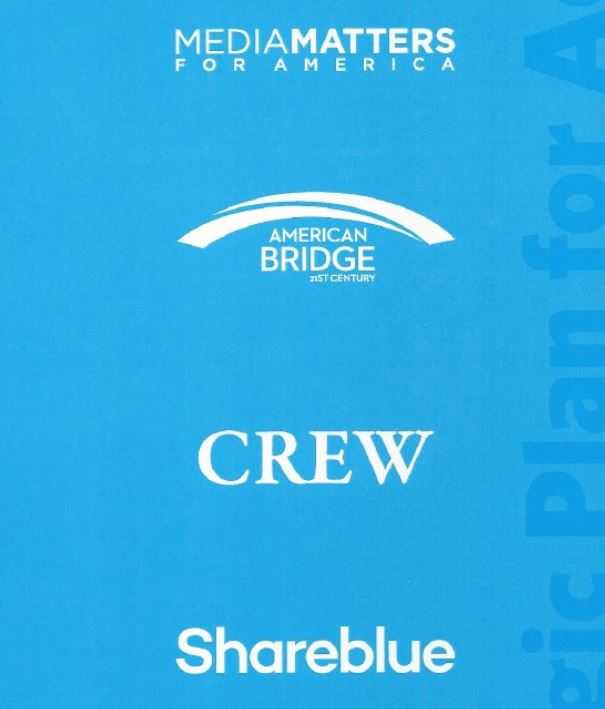 Eisen and Painter were picked to lead CREW as one of the final actions under the leadership of David Brock.

Brock chaired CREW from August 2014 until December 2016 when he stepped down from the position because he did not want the organization to appear too partisan as Donald Trump entered the White House.

“Due to my stepped up political activities in the American Bridge opposition research super PAC, I decided to step off CREW’s board to ensure its public reputation for non-partisanship,” Brock said at the time of his departure. “I’m very proud of the work CREW has accomplished during my two years on board, and its work is more relevant now than ever.”

The organization targeted both Democrats and Republicans for alleged violations prior to Brock’s arrival. CREW skewed towards pinpointing Republican politicians during Brock’s time with the group.

The news that Eisen and Painter were joining CREW was contained in the same press release that announced Brock would be leaving his position.

In January 2017, just one month after leaving CREW, Brock held a donor retreat at a posh Florida resort where he huddled with more than 100 liberal donors in an effort to map out how they would “kick Donald Trump’s ass.”

The Free Beacon was present at the retreat and obtained a copy of his private and confidential memo that laid out his plans over the course of the next four years to fight Trump.

The memo contained sections for Media Matters, American Bridge, and Shareblue, all Brock-affiliated entities. It also contained an entire section on the work CREW would be doing against Trump, despite “officially leaving” the post one month prior to the gathering.

“CREW will be the leading nonpartisan ethics watchdog group in a period of crisis with a President and administration that present possible conflicts of interest and ethical problems on an unprecedented scale,” the memo states.

“Already, top law firms and talented lawyers across the country, with specialties including civil litigation and FOIA, are volunteering to help with the effort.”

The memo additionally talks of how CREW will partner with reporters to “move major stories forward.”

The value of people like Painter in particular stems from their usefulness in attacking Trump not for what they say, but because they are a Republican saying it. That’s why Ana Navarro is on The View and CNN. There is no shortage of crazy ranters available, but if you can put an “R” before the name, it’s worth gold to the media Resistance.

Why is my first impulse wanting to agree with you about that?

RE: “Former “Bush Ethics Lawyer” should be identified as current Vice Chair of left-wing group…”

That’s the problem with the entire GOPe at all levels in this nation. They’re all damn Democrats!

“Controlled Opposition – Your Friend Might Be Your Enemy – Truth”

Painter comes across as brain-damaged.

Funny how there is no shortage of so-called Republicans willing to step up and bash on fellow Republicans. Just try to find a Democrat willing to go maverick though, good luck.

Sharyl Atkisson detailed Brock’s takeover of CREW in her book “The Smear.” Brock is one of the slimiest of Hillary’s henchmen.

How do these relatively obscure ex officials become noticed by Big FNM?

Is there a newsletter they subscribe to or one where some “Ex” can leave their CR and their willingness to dis and dismiss all or some FNM targets?

Seems otherwise it’s word of mouth. And that would be too slow for the quick results we see daily.

Where are all these people coming from? Did they complain while employed? Or was that why they “left” in a cloud of acrimony and hate?

If it’s “too good to be true it probably is”.