She worked at Fusion during the election. 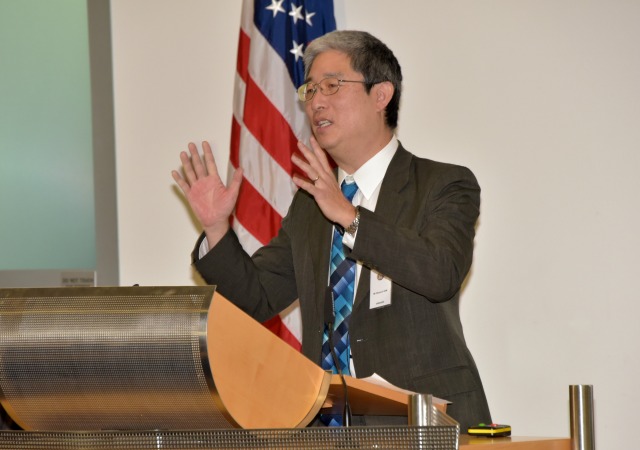 The Daily Caller has revealed that recently demoted Department of Justice official Bruce Ohr did not say on ethics forms that she received payments from Fusion GPS, the company that published the dossier on then-candidate Donald Trump.

The forms The Daily Caller received show that Ohr signed his Public Financial Disclosure Report on 5/12/2017 that the statements in the forms “are true, complete and correct to the best of my knowledge.

For 2014 and 2015, Bruce Ohr disclosed on ethics forms that his wife was an “independent contractor” earning consulting fees. In 2016, she added a new employer who paid her a “salary,” but listed it vaguely as “cyberthreat analyst,” and did not say the name of the company.

The instructions require officials to “Provide the name of your spouse’s employer. In addition, if your spouse’s employer is a privately held business, provide the employer’s line of business.” As examples, it gives “Xylophone Technologies Corporation” and “DSLK Financial Techniques, Inc. (financial services).” The dollar amount does not need to be disclosed. “Report each source, whether a natural person or an organization or entity, that provided your spouse more than $1,000 of earned income during the reporting period,” they say.

The DOJ says, “Financial disclosure reports are used to identify potential or actual conflicts of interest. If the person charged with reviewing an employee’s report finds a conflict, he should impose a remedy immediately.” Its guidance says, “employees should always seek the advice of an ethics official when contemplating any action that may be covered by the rules.”

Someone who falsifies these ethics forms can receive jail time.

Well, as I blogged in December, his wife Nellie worked at Fusion GPS in the summer and fall of 2016. At that time, we did not know if she worked on the dossier, but she “has written extensively on Russia-related subjects” and the Wilson Center has described her “as a Russia expert.”

The DNC hired Fusion to assemble the dossier, which was authored by former British spy Christopher Steele. Ohr brought the information to the FBI, which started the investigation into alleged collusion between Trump and Russia.

Congressional Republicans allege that the FBI used this dossier to receive FISA warrants to spy on members of Trump’s team.

The Ohrs also made an appearance in a memo authored by House Intelligence Committee Chairman Devin Nunes (R-CA) that came out earlier this month, which allege Nellie gathered evidence against Trump for the dossier. Also, Steele kept in contact with Bruce after the FBI let him go as a source. The memo said that the FBI interviewed Bruce after the election about his talks with Steele. 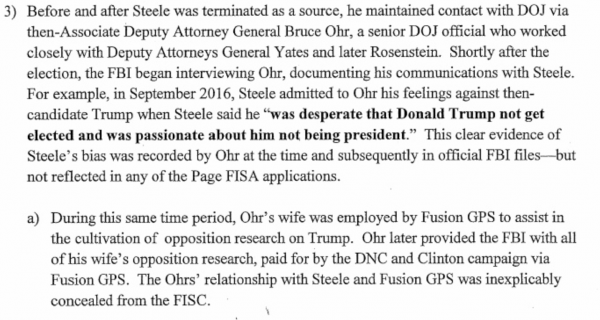 The Daily Caller spoke to a lawyer who specializes in these laws:

Paul Kamenar, a Washington, D.C., public policy lawyer experienced in executive branch ethics and disclosure laws, said, “Based on my reading of the regulations and disclosure guide accompanying the form, he failed to disclose the source of his wife’s income on line 4 by not including the ‘name of the employer.’”

“The law provides that whoever ‘knowingly and willfully’ fails to file information required to be filed on this report faces civil penalties up to $50,000 and possible criminal penalties up to one year in prison under the disclosure law and possibly up to five years in prison under 18 USC 1001,” he said. “Since he lists her income type as ‘salary’ as opposed to line 1 where he describes her other income as ‘consulting fees’ as an ‘independent contractor’ it’s clear that she was employed by a company that should have been identified by name,” he said.

“And even with respect to her ‘independent contractor’ listing, it appears incomplete by not describing what kind of services were provided. Both these omissions do not give the reviewing official sufficient information to determine whether there is a conflict,” Kamenar added.

The DOJ demoted Ohr during an investigation into his contacts at Fusion GPS. Officials stripped him of his title of associate deputy attorney general and vacated his office on the fourth floor at the DOJ.

He did not intend to commit a crime so no problem under the Clinton-Comey standard.

Everything he did here showed intent.

He would be a good one to indict as he would certainly give evidence as to all the other FBI/Justice wrongdoings – until he got killed by a random robbery gone bad.

Or killed himself by shooting himself in the back of the head, twice!

which started the investigation into alleged collusion between Trump and Russia

– That is a #fakenews. The investigation was started when a drunk George Papadopoulos revealed knowledge of Russian opposition reseach on Hillary Clinton to Australian diplomat Alexander Downer (who passed it on).

It really doesn’t matter how the investigation got started. It is not the fruit of the poisonous tree. Besides, don’t conservatives hate that doctrine? Guilty is guilty.

Trump and his followers have a shovel and they just keep digging. So what if he is corrupt – he is appointing the right judges. Fine. Just get off your high horse. You have proven beyond a reasonable doubt that you are no better or less hypocritical then the left (commies if you like).

Love the revisionist history attempt. Also, the moral equivalence bit. Ever thought what would happen if this all boils down to Clinton-Dem-Russian collusion or Russia suckering the Left? Considering where the money has gone recently (spelled Clinton) with the Russians, that is a possibility.

That is revisionist history . Papadapolis was not even interviewed until Jan 2017 and was not even in the Joint report J 2017. No doubt they heard rumors ect ,but the whole Papadapolis thing is a backdated excuse. They did not act on it at the time .

Why do you come here YellowTroll … you provide nothing, ABSOLUTELY nothing. You change no ones minds. Does this help with your masturbatory fantasies? I can not understand why you even bother to waste energy typing on this blog. You really aren’t welcome here (or anywhere I suspect) so why don’t you and the antifa bois go out and play.

re: “Why do you come here YellowTroll…”

Isn’t it obvious? It’s the end of February, people are staying inside so there are no fares for his cab. Welcome to the connected world, even trolls have to hustle chump change.

The commie HAS to come here. It’s what it’s paid to do, no matter how vapid or insipid.

As for the comment, just another prog lie. That’s all they have.

Jail time for the corrupt. Coming soon. yellowbelly’s boss is going to jail.

Sundance at CTH believes the ones not forced out ,Ohr , Priestap , Strzok . Page are cooperating .

Something tells me they should keep “mining,” because
there’s gold in them thar Ohrs!!!!!!!!!

Don’t hold your breath until he is prosecuted.

Those rules aren’t for executive-level positions in the government. Those rules pertain only to the little guys.

Nothing to see here; move along.

“Don’t hold your breath until he is prosecuted….”

That’s exactly how hopeless the left wants you to feel.

Don’t give up that easy. Not this time.

Much as I hate to use this as an example, the Left would keep pounding until they got a small victory – like the appointment of a Special Counsel, or an indictment, etc. We have to fight with the same level of intensity as they do, or we will lose.

What does it matter anymore? The left will not accept any blame, any punishment, any degree of responsibility for their obvious crimes.

The establishment republicans are happy with letting this pass unnoticed and unremarked.

I will believe we do not live in a state controlled by an unelected, lawless, cabal when Clinton is in orange, Comey et al have fled to a non extradition country and we have genuine judicial reform.

There is no way to pretend this is a republic when we have the praetorians selecting the next ruler with zero consequences. There is no equality under the law. No justice. No respecting of our rights and traditions as free men.

It is all about naked power for the democrats. All we need are the Blues and the Greens rioting at the Hippodrome.

What I would give to see Comey hiding in an Foreign Embassy to avoid prosecution.

Both Ohrs are going to prison.

What crime does it actually take for a CRIMINAL to get arrested, prosecuted AND GET OFF OUR PAYROLL ?

Switch their party affiliation to Republican

An interesting theory of what is transpiring with Surveillance-gate.

Shooting blanks – until the fifth shot.

“The Little Bureaucrat Who Could: Why Does Sally Yates’ Name Figure So Prominently in the RUSSIAGate Hoax?

Paul Sperry likens her to a “blackmailer.”

[I]n late December or early January, someone working under Obama’s own national security adviser, Susan Rice, unmasked routine NSA intercepts of the Russian ambassador. Was it to spy on Flynn, Rice’s replacement?

Just days after the inauguration, moreover, Yates used those same NSA transcripts to try to get Flynn fired, by warning the White House that he was “vulnerable” to Russian extortion.

Despite her warnings, Flynn remained in his position for 18 more days…. He was only forced to resign after somebody from the Obama administration illegally leaked the intercepts to the Washington Post and created a political embarrassment for President Trump.

Unlike the Obama officials who disclosed highly classified information, Flynn committed no crime.”

“And that of course wasn’t Yates’ only action against Flynn – she also tried to get him prosecuted under you’ve-got-to-be-kidding-me non-law the LOGAN ACT.

“Note that when the FBI concluded Flynn hadn’t lied, the DOJ rushed to come up with a new theory why he was guilty of something anyway: And the pretext they chose was the LOGAN ACT.”

And where is AG Sessions? Knock, knock is anyone home? I think AG Sessions must be napping, because he sure as heck isn’t working! Time to resign or be fired!

Both Ohr and his wife has some splaining to do, because they left out some very important information! Like, why the heck didn’t they name Fusion GPS? Because they didn’t want to get in trouble? Seems like they are in plenty of trouble now.

of course he didn’t, they NEVER believed trump could win.

Ohr didn’t “intend” to break the law, so under the Comey-Clinton exception he won’t face any penalties.