“Where students, including transgender students, are penalized or harassed for failing to conform to sex-based stereotypes, that is sex discrimination prohibited by Title IX” 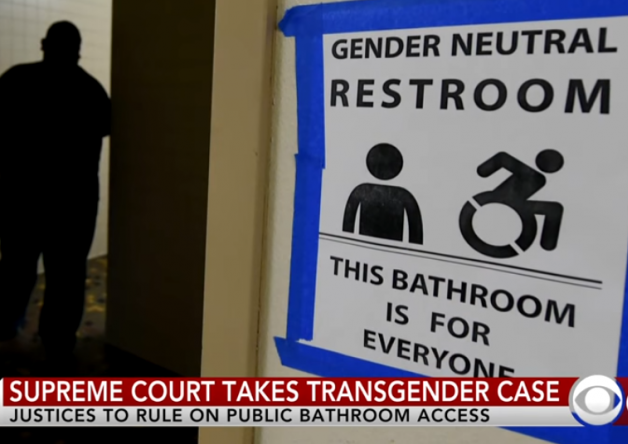 According to a report by Buzzfeed news, the Education Department will not concern itself with complaints lodged by transgender students about campus bathrooms.

Email correspondence between Buzzfeed and Education Department spokeswoman, Liz Hill, indicates that while bathroom complaints will likely go uninvestigated, other complaints levied by transgendered students will receive consideration and investigation when appropriate.

For the past three weeks, BuzzFeed News called and emailed Education Department officials attempting to pinpoint the agency’s position.

Finally on Thursday, Liz Hill, a spokesperson for the agency, responded “yes, that’s what the law says” when asked again if the Education Department holds a current position that restroom complaints from transgender students are not covered by a 1972 federal civil rights law called Title IX.

Asked for further explanation on the department’s position, Hill said Friday, “Title IX prohibits discrimination on the basis of sex, not gender identity.”

She added that certain types of transgender complaints may be investigated — but not bathroom complaints.

“Where students, including transgender students, are penalized or harassed for failing to conform to sex-based stereotypes, that is sex discrimination prohibited by Title IX,” Hill said. “In the case of bathrooms, however, long-standing regulations provide that separating facilities on the basis of sex is not a form of discrimination prohibited by Title IX.”

Last February, the Trump administration rescinded Obama’s transgender bathroom policy, which was initiated not through legislation, but agency policy.

Guidance issued by the DOJ at the time of the policy change reiterated their commitment to investigating claims of “discrimination, bullying, or harassment.” From the February 2017 DOJ memo:

These guidance documents take the position that the prohibitions on discrimination “on the basis of sex” in Title IX of the Education Amendments of 1972 (Title IX), 20 U.S.C. § 1681 et seq., and its implementing regulations, see, e.g., 34 C.F.R. § 106.33, require access to sex-segregated facilities based on gender identity. These guidance documents do not, however, contain extensiv_e legal analysis or explain how the position is consistent with the express language of Title IX, nor did they undergo any
formal public process.

The U.S. Court of Appeals for the Fourth Circuit concluded that the term “sex’ in the regulations is ambiguous and deferred to what the court characterized as the “novel” interpretation advanced in the guidance. By contrast, a federal district court in Texas held that the term “sex” unambiguously refers to biological sex and that, in any event, the guidance was “legislative and substantive” and thus formal rulemaking should have occurred prior to the adoption of any such policy. In August of 2016, the Texas court preliminarily enjoined enforcement of the interpretation, and that nationwide injunction has not been overturned.
In addition, the Departments believe that, in this context, there must be due regard for the primary role of the States and local school districts in establishing educational policy.

In these circumstances, the Department of Education and the Department of Justice have decided to withdraw and rescind the above-referenced guidance documents in order to further and more completely consider the legal issues involved. The Departments thus will not rely on the views expressed within them.

Please note that this withdrawal of these guidance documents does not leave students without protections from discrimination, bullying, or harassment. All schools must ensure that all students, including LGBT students, are able to learn and thrive in a safe environment. The Department of Education Office for Civil Rights will continue its duty under law to hear all claims of discrimination and will explore every appropriate opportunity to protect all students and to encourage civility in our classrooms. The Department of Education and the Depart_ment of Justice are committed to the application of Title IX and other federal laws to ensure such protection.

Thus far, their position is consistent.

If this goes by the normal ebb and flow of news, there are two things that will follow. First, the left will find the most picked-on, sympathetic, disadvantaged individual possible and promote the heck out of them on national television, about how they are being denied their basic rights as a human, how dare we, etc… Second, this individual will be revealed to be a fraud in some way, either with a massive criminal record they’re trying to duck, or perhaps being gender X while claiming to be gender Y but actually X from the beginning, etc… and the cameras will quietly vanish as the press goes to chase another rabbit.

I figure the whole cycle will take about three months.

Wait. I thought the Republicans were going to defund the Dept of Ed.

They’d like to, but that takes 60 votes in the senate. Going back to what was department policy for almost its entire time in existence doesn’t.

Oops – gave you a down arrow in error.

Dont expect the republicans to do anything pelosi wouldnt do.

We must destroy the GOPe, or we will lose our freedom.

The simple solution to allowing 0.0047% of the population hijack our use of bathrooms is

But that would mean the people who cars SO MUCH! about transgender rights would have to wait 15 minutes to relieve themselves. And that’s crazy talk.

Public bathrooms for adults are usually labelled “men” and “women”; those for children are usually “girls” and “boys.”

Why have we reached the point where it’s necessary to point out that these are terms that reference (biological) sex, and are not (and never have been) references to “gender”?

“I identify as a girl (but I have male genitals).” And is the plumbing in the boys bathroom not expressly designed to address your physical needs? Or does it now have to address your psychological needs as well? What if your psychological “need” amounts to a demand that we acknowledge a “reality” that only you can see? Who is the bully here, and who is being bullied?