The Trump administration has notified the Supreme Court, in a pending case, that it is withdrawing the transgender bathroom mandate ordered by the Obama administration.

The notice is here. (full embed at bottom of post.)

Buzzfeed, which is in favor of the mandate, reports on the latest development:

The Trump administration on Wednesday issued new guidelines that roll back an Obama administration policy that had been designed to reduce anti-transgender discrimination in public schools.

In issuing new school guidance, the Department of Justice and Department of Education sent a letter to public schools that said the departments “have decided to withdraw and rescind the above-referenced guidance documents in order to further and more completely consider the legal issues involved. The Departments thus will not rely on the views expressed within them.”
“Please note that this withdrawal of these guidance documents does not leave students without protections from discrimination, bullying, or harassment,” it stated….

Despite the federal government’s latest position, states and local school districts could adopt their own transgender-inclusive rules — and those with existing rules will remain in place. Trump’s latest guidance also does not block individuals or advocacy groups from raising their own complaints in federal court that a transgender student’s rights have been violated.

James Esseks, who oversees the ACLU’s litigation on behalf of a transgender student in Virginia, told reporters on a call Tuesday, “Courts enforce Title IX and courts at the end of the day decide what the scope of Title IX is.”

Here is the text of the letter to the court:

This case, which is scheduled for argument on March 28, 2017, involves a question about the proper application to transgender students of the prohibition on sex discrimination under Title IX of the Education Amendments of 1972, 20 U.S.C. 1681 et seq., and its implementing regulations, see 34 C.F.R. 106.33, in the context of sex-segregated facilities such as bathrooms and locker rooms. In the decision below, the court of appeals deferred to the interpretation of Title IX and its implementing regulations reflected in administrative guidance issued by the United States Department of Education. See Auer v. Robbins, 519 U.S. 452 (1997).

This letter is to inform the Court that, on February 22, 2017, the Department of Education, in conjunction with the Department of Justice’s Office for Civil Rights, announced their decision to withdraw that guidance and a subsequent joint guidance letter, not to rely on the views expressed in the guidance, and instead to consider further and more completely the legal issues involved. Enclosed is a copy of the document withdrawing the guidance.

Here is the key sections of the new guidance letter:

• Letter to Emily Prince from James A. Ferg-Cadima, Acting Deputy Assistant Secretary for Policy, Office for Civil Rights at the Department of Education dated January 7, 2015; and

These guidance documents take the position that the prohibitions on discrimination “on the basis of sex” in Title IX of the Education Amendments of 1972 (Title IX), 20 U.S.C. § 1681 et seq., and its implementing regulations, see, e.g., 34 C.F.R. § 106.33, require access to sex-segregated facilities based on gender identity. These guidance documents do not, however, contain extensiv_e legal analysis or explain how the position is consistent with the express language of Title IX, nor did they undergo any
formal public process.

The U.S. Court of Appeals for the Fourth Circuit concluded that the term “sex’ in the regulations is ambiguous and deferred to what the court characterized as the “novel” interpretation advanced in the guidance. By contrast, a federal district court in Texas held that the term “sex” unambiguously refers to biological sex and that, in any event, the guidance was “legislative and substantive” and thus formal rulemaking should have occurred prior to the adoption of any such policy. In August of 2016, the Texas court preliminarily enjoined enforcement of the interpretation, and that nationwide injunction has not been overturned.
In addition, the Departments believe that, in this context, there must be due regard for the primary role of the States and local school districts in establishing educational policy.

In these circumstances, the Department of Education and the Department of Justice have decided to withdraw and rescind the above-referenced guidance documents in order to further and more completely consider the legal issues involved. The Departments thus will not rely on the views expressed within them.

Please note that this withdrawal of these guidance documents does not leave students without protections from discrimination, bullying, or harassment. All schools must ensure that all students, including LGBT students, are able to learn and thrive in a safe environment. The Department of Education Office for Civil Rights will continue its duty under law to hear all claims of discrimination and will explore every appropriate opportunity to protect all students and to encourage civility in our classrooms. The Department of Education and the Depart_ment of Justice are committed to the application of Title IX and other federal laws to ensure such protection. 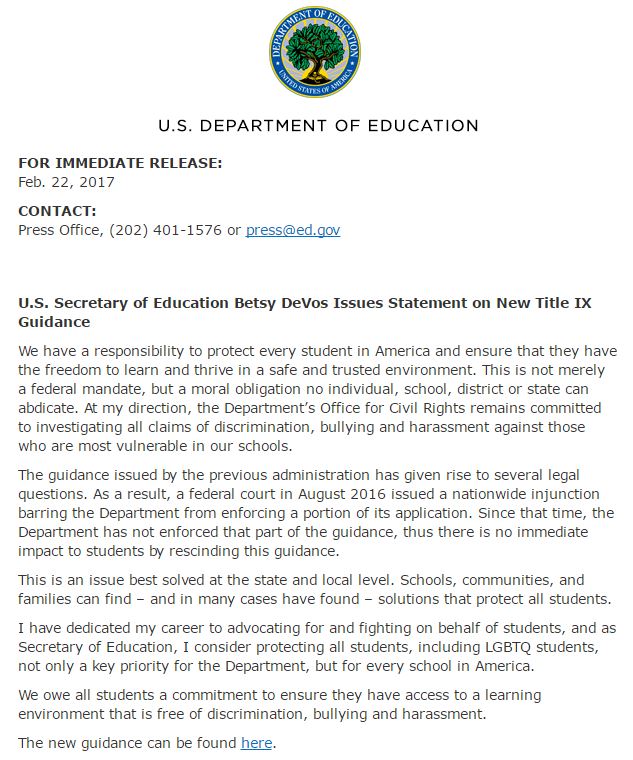 I consider protecting all students, including #LGBTQ students, not only a key priority for the Department, but for every school in America.

I celebrate this action too, but I’d prefer not to rely on executive orders.
Trump should work with Congress to pass legislation. We don’t need another Democrat making it to the White House, and reversing everything again with another pen stroke.

Pass legislation saying what? Title 9’s language is already clear; the 0bama DOE and DOJ “guidance” simply ignored it. Hence the lawsuit against it, which will presumably now be dismissed. I would have preferred the new administration, instead of simply rescinding the “guidance”, to have settled the lawsuit with a consent decree forever forbidding the federal government from issuing such a letter again, and perhaps also requiring it to submit all “dear colleague” letters to independent legal review.

What would a consent decree do?

What sort of amendment would you suggest? The law seems clear enough as it stands. When an administration just ignores the law’s plain language, how can making it plainer help?

You think a democrat is going to abide by Trump’s tradition of avoiding executive orders?

The sleazy left and its media have shattered our republic. It will never be the same. Elections will have more consequences than ever.

I hope on Trumps way out he finds a way to do away with Executive orders , at least make it extremely hard , almost impossible to do.
It’s been abused but I am glad Trump has the ability.

Say what? That’s insane. Why would you want to do that? How on earth can any president function if he can’t tell his employees what to do? I have to ask, do you have the faintest idea what an executive order is?

In that case, what you really want is a sunshine law on all executive memoranda. They can function like EOs but are not required to be publicly disclosed.

Obama is thought to have abused this function heavily, but the exact count is unknown since they can be marked confidential.

That’s like saying that because Congress sometimes makes unconstitutional laws we should ban it from making any laws at all. Or because some food is poisonous we should ban all food and starve. I seriously think people who say things like that have no idea what executive orders are, they never heard of them until the 0bama era, and imagine they’re some sort of extraconstitutional legislation.

Do unto the Democrats what they did to everyone else! 🙂

I tried to read the included quotes, but Buzzfeed toxicity made me turn back.

While what Trump is doing is exactly the right thing to do to right Obama’s disastrous wrong, there still remains one unanswered question If Obama’s original edict was labeled as “guidance” then why was Obama demanding it be implemented as though it was mandatory? Doesn’t “guidance” mean a suggestion, an idea to consider that works the way the administration wants, or whatever. How can you take “guidance” and treat it as though it was law or a requirement?

Betsey is worrying me. If the utmost priority is to continue to make education about social justice, she will get more of that and less education.

Scrap the Department and national control of the schools. The schools promise what they cannot deliver. And they make those promises because if the truth were told, that half the kids aren’t highly educable, then there would be a lot less need for education employees and big shots. Also, it is the parents that have the largest influence on children’s success, not the school.

Kids pick on kids for all kinds of reasons. Straight kids get teased about being called gay too. It seems that the more adults focus on LGTB in school, we are getting more of it from children.

It is now cool to be gay.

Does this mean I can’t piss in the Ladies bathroom at my local Piggly Wiggly any more? It’s twelve feet closer than the Mens.

There are two water fountains between the Mens and Ladies rooms, one set high for adults, the other low for kids, and dwarves, I presume. What does the federal government have to say about which fountain I use?