Democrats promised the passage of tax reform would spell certain doom, but their absurd fear mongering was all for naught.

A poll released by the New York Times Monday showed a steady uptick in support since the passage of tax reform, with disapproval for the measure slipping. 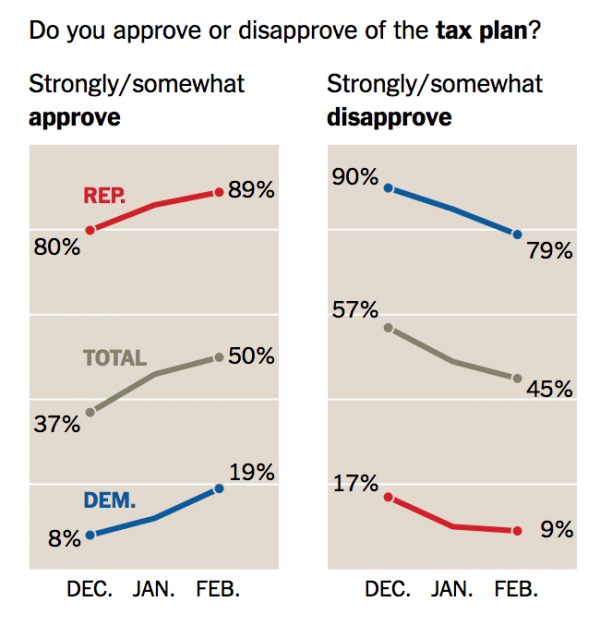 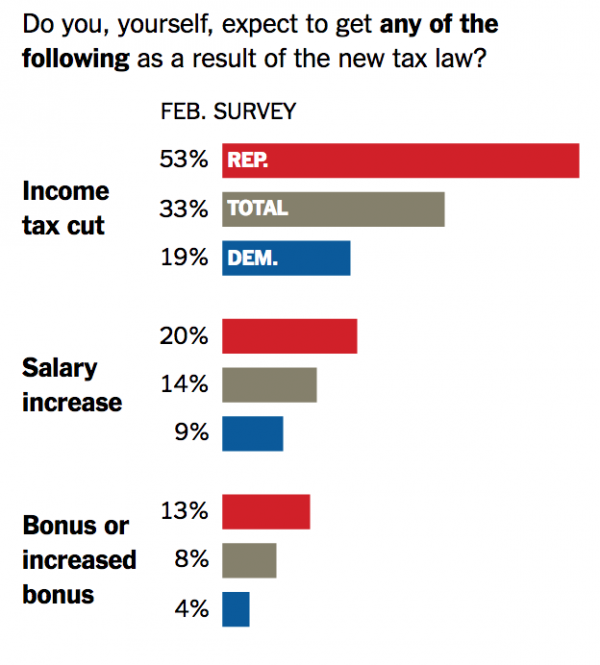 In the upcoming midterm elections, Democrats have unwisely invested a huge chunk of political capital in their opposition to tax reform.

“Public opinion is moving in the direction of this bill,” said Jon Cohen, chief research officer for SurveyMonkey. “Considering where it was, it is dramatically different.”

Mr. Cohen cautioned that the bill still was not particularly popular, and opposition among Democrats remained strong. Still, support has grown even among Democrats, from 8 percent just before the bill passed in December to 19 percent this month. For Democrats, Mr. Cohen said, running on opposition to the bill has become more of a political gamble.

“It’s less of a sure bet than it seemed in December,” he said. “This isn’t a problem yet for Democrats, but the movement isn’t a positive one.”

Other recent polls have shown similar upswings for the law, including a Monmouth University Poll in late January that found support for it had risen to 44 percent nationally, from 26 percent in December.

“I think we are essentially seeing Republicans ‘come home’ on the tax plan in our data,” said Lori Weigel, a partner with Public Opinion Strategies, a Republican polling firm. “That is certainly in part due to consistent communications about the tax plan and the news coverage of prominent companies investing in workers.”

Democrats have done little to counter the Republican messaging and concede it has had an effect, along with a series of high-profile company announcements of bonuses, raises or other benefits attributed to tax savings.

But they are ramping up efforts to rebrand the law as disproportionately helping shareholders and the wealthy, and they contend the boost from bonus announcements will fade.

The successful passage of tax reform was a boon for Trump’s approval numbers too. Last week, I blogged about the steady upswing of Trump’s (and generic Republican ballot) approval ratings. Those numbers directly coincide with the tax overhaul deal. 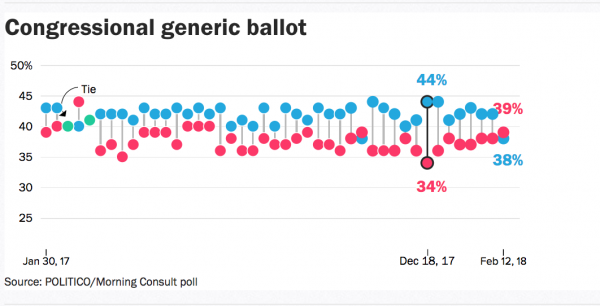 Republicans aren’t in the clear heading into the midterms, but this is one more indicator that the media-touted blue wave is not a sure bet. At least not at this point.

Amazing how popular keeping your own money is…..

What’s amazing is that so many people have a positive view of the tax cut despite the deep, pervasive, heavily entrenched belief that they are not getting any money back from this tax cut themselves. After all, the media told them so over and over.

Imagine their surprise, repeated millions of times over. I expect it will be quite a show.

What the Republicans figured out was that 80% of tax filers get a refund. So, coupled with the tax rate changes they changed the withholding amounts. It appears you are getting this nice income boost but you are simply eliminating that tax refund. Additionally, several tax deductions were lost so it will be next year at this time that you will actually understand the impact of the tax changes. Don’t get too excited now. Be patient. It might be great or it might not.

Besides…..no one believes the polls of the New York Times.

the fun think is. compare Clinton, ah the bush,democratic stimulus bill, Clinton raised taxes to get about 800m stimulus bill, the Bush/Democratic spend 700m for a “shovel ready” stimulus bill, bet most of the money went to connected sources, on the other hand Trump did a 1.5 stimulus bill by giving it to the business generally(even ones that didn’t support him), and directly to the people paying taxes. Sure some people will see their taxes go up but they are in high tax states(see NY, CA, and MA)

It all comes down to one word: “proof.”

People like to see proof that their elected leaders will deliver on their promises. The Dems have been yowling about how bad this tax bill will be for ordinary voters, while DJT has been saying something different.

What numbnuts are in the 46%? Can I talk to them, please?

Well, aren’t there something like 47% who don’t pay any taxes? Plus true blue believers whose ambitions are hurt by the rate changes?

Trump handed Uncle Sam the word,
get right with the Laffer Curve.

We got mo’ $$ in pocket,
the economy shootin’ like a rocket…

Ok. That’s enough of that crap.

This explains why the Democrats are launching a 100 city tour to protest the tax cut.

yes, they are that out of touch

So, 46% don’t like the the Trump tax reform, but it is reported that 45% don’t pay federal taxes anyway. Why would they support the reform? What’s in it for them? Let us see the statistics for those that actually pay taxes – then make some conclusions.