Eric ‘Nation of Cowards’ Holder May Run in 2020

Eric ‘Nation of Cowards’ Holder May Run in 2020 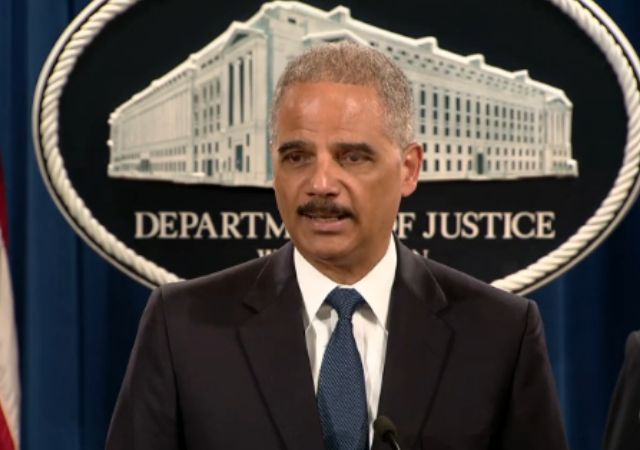 Former attorney general Eric Holder is reportedly thinking of throwing his hat into the ring for the 2020 election. The roster of candidates who will run as Democrats will likely be very far left, so he’ll fit right in.

As you may recall, back in 2009 Holder called America a “nation of cowards” on race. Sadly, that would score him points with some people on the left.

“We’ll see,” he said when asked about a bid for the Democratic nomination.

Holder, addressing reporters at a media breakfast sponsored by the Christian Science Monitor, said that he will make a decision this year.

“I think I’ll make a decision by the end of the year about whether or not there is another chapter in my government service,” he said.

Also asked if he planned a career in politics, he said again, “I’ll see.”

Holder has already made his opposition to Trump well known and is doing everything he can to ingratiate himself with the liberal resistance movement.

“Is there a technical case there now?” Holder said in response to questions from POLITICO after a Christian Science Monitor breakfast Wednesday. “I think so. Now.”…

Holder, who ran the Justice Department under President Barack Obama and was deputy attorney general under President Bill Clinton, initially seemed hesitant to weigh in on whether Mueller could bring an obstruction case. Some Trump allies and legal experts say the law prevents the president from being charged with such a crime. Others believe he cannot be indicted at all.

Holder disagreed, saying a sitting president is not above the law, based on a legal examination of the issue that was done when he was the deputy attorney general under Clinton.

He’s going to need a campaign slogan. Maybe “Fast and Furious 2020” would work.

Please do run, Eric. Your laundry will be hung out to dry, you racist. In other news, Eric Holder doesn’t have a chance in Hell 🙂

And select Loretta Lynch as his VP.

Or Loretta can run for Pres. and select Holder as her VP.

I can just see the bumper stickers now!

The a-hole believes his own press.

Without the corrupt media to hide his flaws, and without the insanity of his having the power of the DOJ, this guy is nothing but a little bitch, who needs to be prosecuted for his many crimes committed while head of the DOJ.

Like obama and klinton, holder is the ONLY high profile figure EVER to have been photographed picking their nose in public. It says a lot about his infantilism and his lack of moral boundaries:

I hope events will intercede to make that a practical, instead of just theoretical, impossibility.

Holder alongside with 00000bama and Shrillary need adjoining cells at Club Fed.

the damage done to these disUnited States is incalculable.

is there any way the the Uranium One sale can be revoked on national security grounds ?

None of those three will ever see the inside of a cell. Nor will Comey, Mueller, or any of the rest of that crowd. It is just, plain, not going to happen.

Revoked?! How exactly do you imagine the US could possibly revoke the sale by foreign shareholders of shares in a Canadian company to a Russian company? It’s completely out of our jurisdiction. What nobody is telling you is that even if 0bama had not approved the sale it would have gone through anyway, but the company would have had to sell off its US mines. They weren’t the point of the deal, so it would have happened without them too. Can Trump make Rosatom sell those mines now? I don’t know, but he could probably impose stricter licensing conditions, or even revoke some or all of those mines’ licenses, thus making it no longer worthwhile for Rosatom to keep them.

re: “I hope events will intercede…”

Such as a nuclear holocaust? The Cartels taking over Washington DC and bring Holders guns with them? What even Rag, don’t be shy….inquiring minds want to know.

Holder could ensure Trump’s reelection by running. After losing, Holder could write a book about how his incompetence was everyone else’s fault.

They won’t admit it, but Democrats don’t have a candidate to run against Trump in 2020.
All the names they have floated have very little chance to win, especially because they all have a lot of dirt on them, and they know that Trump is downright bold and he has no problem exposing every piece of their dirty laundry.
Holder would be such an easy punching bag.

And Oprah Winfrey has once again declined the honor. Imagine that.

I figure, after her little speech she realized that she does not want her own laundry out in the open.

I don’t see the D’rats snapping up this turkey. Not long ago, they’d have been happy with a “corruption as usual” type, and if he happened to be black, then great, they’d get the left-wing racist vote for free.

But I don’t think classic corruption is what the Party is after right now. It wants some race warfare/SJW people. And, while the promise of conventional white-collar theft and government corruption are great for fund-raising, they’re not the ticket to “voter enthusiasm” and “energy”, which is what they’ll need in 2020 and beyond.

notamemberofanyorganizedpolicital in reply to tom_swift. | February 8, 2018 at 2:21 pm

Problem is the entire Demcrap Party is total corruption from positions of dog catcher on up to the national level.

JusticeDelivered in reply to notamemberofanyorganizedpolicital. | February 8, 2018 at 4:56 pm

It is far worse than corruption, Dems have openly encouraged the slowest people of the world to join their ranks, typically people with average IQs of 85 and lower.

… typically people with average IQs of 85 and lower.

It would be nice, at sometime in my life, to have the choice between two really good candidates.

Kennedy and Nixon were both destroyed. That suggests they were both good men. Or at least better than average for politics.

I watched the debate between Dick Cheney and Joe Lieberman in 2000, and came away wishing they were the presidential candidates. I’d happily have voted for either of them over either of their bosses.

they all have a lot of dirt on them

Few, if any, politicians of any stripe have more dirt on them than the incumbent. That you don’t see that is sad.

I guess you weren’t an investor in Trump Casinos or a student at Trump U.

What the state of the country will be in 2020 is conjecture. I am sure that whatever it is, you will still be wearing your blinders. But others won’t.

..and yet here he is, cleaning up the mess created by the Black Baby Jesus and ensuring all AMERICANS can once again be part of the Merican dream.

Well, the joke’s on you because it was your party that fraudulently nominated the worst candidate in history, so bad that she couldn’t beat such a flawed individual as Donald Trump.
And the joke stays on you people, as you people still can’t find among yourselves ANYONE able to beat him in 2020.

So, no blinders here, but an uncontrollable urge to laugh our arses of at you people.

It’s hard to beat modern universities for fleecing students of hundreds of thousands of dollars, leaving their futures bleak and hopeless, with no job skills. Trump U. got excellent student evaluations. I know that doesn’t mean a lot, except that it was no worse that State Scam Universties, which have the same fake evaluations.

Universities now turn out millions of graduates qualified for nothing but government do-nothing jobs. Which is why they are livid about the declining supply of sinecures.

The evaluations were collected on the first day, before the suckers had experienced the rip-off.

Curious these threadbare memes never wear out. As for Trump University if every college graduate sued for their degree not paying off then pretty much all American colleges and universities would already be sued out of business. The complaints lodged against Trump U can be lodged against all universities. I would join them. Go for the degree, stay through the ridiculous and expensive political indoctrination. And after all that, the damned thing never advanced my career as advertised.

Um, no. “Trump University” was not a university and fraudulently advertised itself as one. It had already been warned by the NY Attorney General, and promised it would stop operating in NY but it didn’t. Then Trump personally recorded advertisements promising that he had personally selected the instructors and taught them his real estate investment secrets, which the students would learn in these courses. None of that was true. He never even met these instructors, and they certainly didn’t know and couldn’t teach his secrets, whatever they might be. It was out-and-out fraud, and there is no way to defend it. Which is why he settled despite bragging that he never does (in fact he always does).

“more dirt on them than the incumbent”

That was true for Obama, and for Holder.

Few, if any, politicians of any stripe have more dirt on them than the incumbent. That you don’t see that is sad.

I doubt that your claim is true. I don’t dispute the dirt on Trump; you see that clearly, and you’re right, but your problem is that you don’t see the equivalent or greater dirt on so many others. Hillary Clinton, for instance. She’s crooked in different ways than he is, but of the two she’s the crookeder.

Holder: all the mendacity of Obama but without the charisma.

but much more transparently corrupt –
arrest hmi is afast and furious way for being responsible
for the death of US citizens by his sale of guns to the cartels – what did he and the black cheese-us get ?
(more like the black baby Moe)

Holder says a sitting president is not above the law. Must be a long-held position of his going way back to at least 2017…

I hope he does. That guy is as boring as cold oatmeal. He makes Al Gore look exciting.

notamemberofanyorganizedpolicital in reply to BrokeGopher. | February 8, 2018 at 2:25 pm

Better than the only attorney general to ever go to prison as a convicted felon,like your icon John Mitchell.

I think it is time to dig deeply into how Holder gave black racists a free ride to violate every other races civil rights. DOJ needs to get cracking on that right away.

What’s the statute of limitations on contempt of congress. Surely there’s still time to prosecute him?

He won’t be prosecuted unlike your icon “Mr Law and Order” AG John Mitchell.