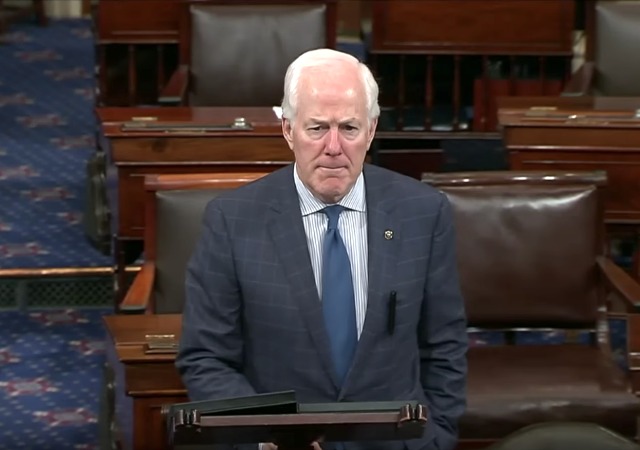 President Donald Trump sent over his immigration proposal to Capitol Hill that includes a border wall, end the visa lottery, and have curbs on visas for family members of legal immigrants.

The GOP Senators embraced the plan and Senate Whip John Cornyn (D-TX) told Democrats that the “clock is ticking” for them to offer a counter proposal.

At its base is still a resolution for the Deferred Action for Childhood Arrivals program, which has protected young undocumented immigrants brought to the US as children from deportation. Trump has decided to terminate the Obama-era program.

The White House proposal offered a pathway to citizenship for 1.8 million eligible immigrants, more than the 800,000 of whom registered for DACA in the five years of the program. In exchange, the White House sought upwards of $25 billion for border security and a wall, a number of changes to laws to make it easier to deport and detain immigrants, a substantial cut to legal immigration based on family relationships and an end to the diversity visa lottery.

The bill also includes “the proposals that would toughen immigration enforcement and limiting family-based visas only to spouses and children under 18 years old.” It also limits the diversity lottery once the backlog clears out, but that has 4 to 5 millions already waiting in line. They say they will make those cuts once the backlog clears in order to give “Congress time to make reforms.”

Cornyn had this exchange on Twitter with Ben Marter, the communications director for Senate Minority Whip Dick Durbin (D-IL): 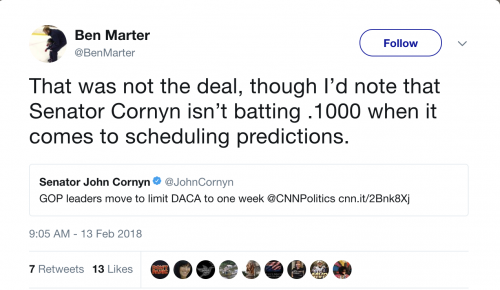 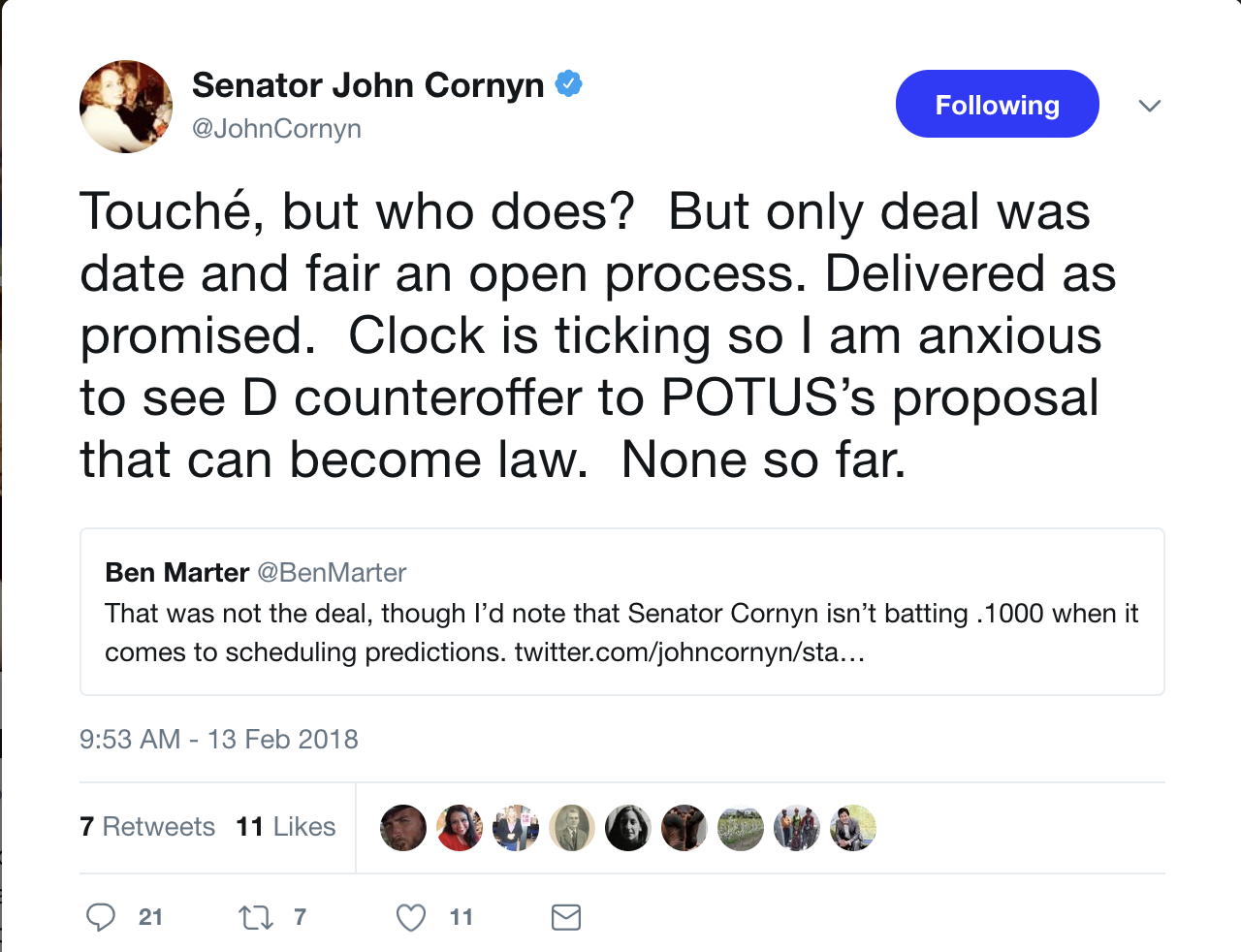 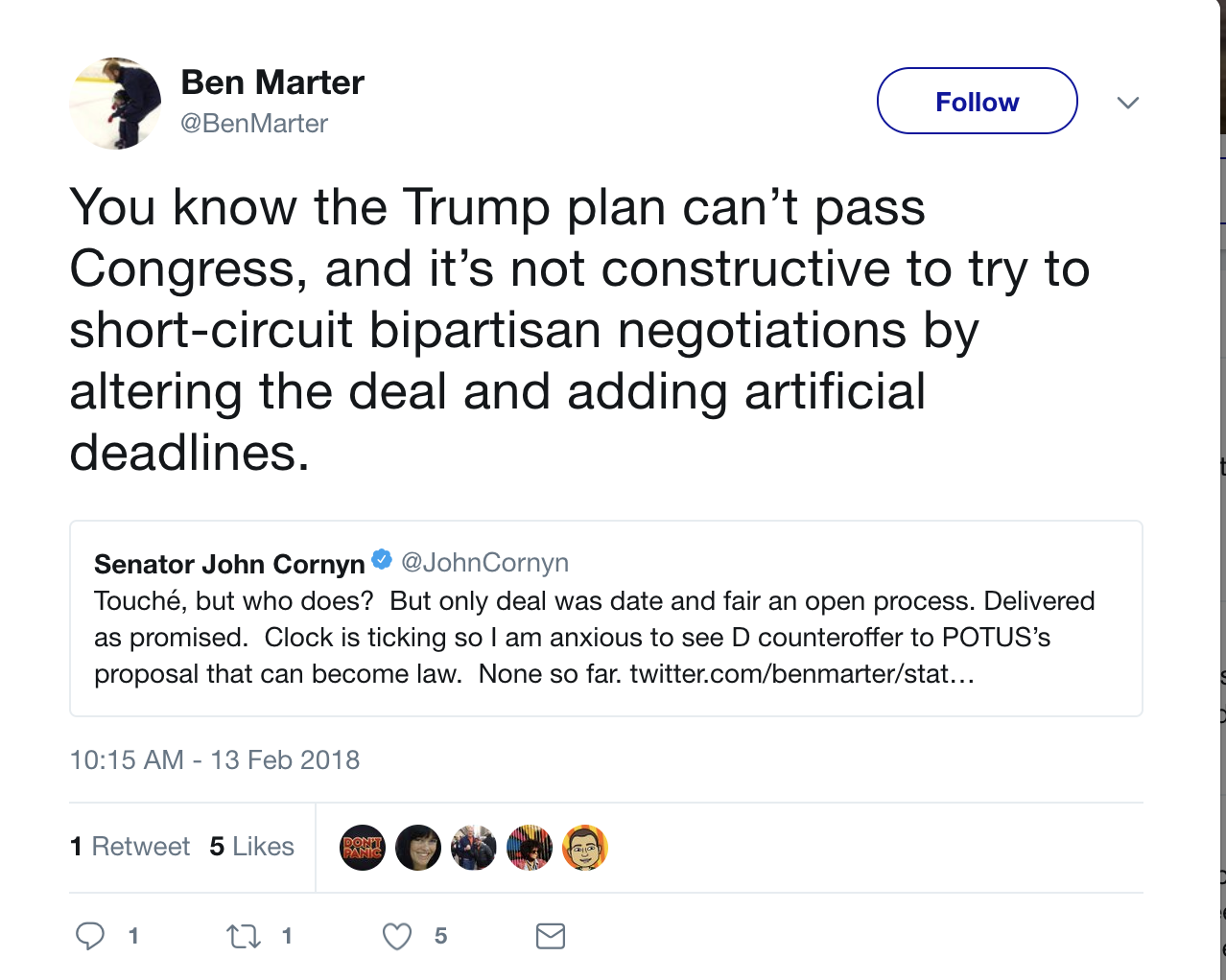 This is not a strategy to make a law: Democratic Senator Dick Durbin told reporters he hoped a combination of the Senate’s 49 Democrats and independents, coupled with 11 Republicans, could get behind a bill, propelling it to passage.

Cornyn and Senate Majority Leader Mitch McConnell (R-KY) want to end the immigration debate on Thursday. From The Hill:

On Monday evening, senators voted to advance the immigration debate to the Senate floor. McConnell had promised a debate on immigration in order to get a spending deal in January but he has been careful not to commit to a solution on the pressing issue of renewing the Deferred Action for Childhood Arrivals (DACA) program.

With the Senate expected to be out of town next week for Presidents Day, there is little time for the Senate to reach a deal before the initial March 5 deadline to find a fix for DACA.

Cotton told Fox News that the plan from Trump “is not an opening bid for negotiations” and described it as “a best and final offer.” However, Trump announced that DACA negotiations “have begun,” which means he may have some flexibility on some issues.

As predicted, there WILL be amnesty. It WILL be signed by T-rump. Because he DID want it all along.

I’ve already bet you before on this – I won, you lost, everyone read it. And I’ll bet you again –

Your prediction is ABSOLUTELY wrong.

The Senate will come up with nothing. Schumer will not allow the Senate to come up with anything. Not only will Trump not sign an amnesty bill, no bill will be sent to Trump to even sign. Schumer thinks he’s better off going to the election with this hanging out there unresolved. He does NOT want any bill passed.

(now if there was a bill on the terms that Trump set – ending chain migration, etc, Trump would sign, but that bill will never pass this Congress, not in any way, shape or form)

notamemberofanyorganizedpolicital in reply to Tom Servo. | February 13, 2018 at 4:12 pm

Everyone can find some good reading in this.

“Victor Davis Hanson: The NeverTrumpers Are Cultural Kin of the Progressive Left, And Would Rather Lose All Political Points Than Lose Face With Their Leftist Political Brethren Being Seen Associating With Embarrassing Walmart Republican Bumpkins”

“Dem’s fighting words– and completely accurate, down to the punctuation.

Have you noticed the Detestables — the cohort of liberal-leaning #FakeNews Republicans largely ensconced in liberal industries in liberal neighborhoods in liberal cities — emulate their liberal pals’ use of the curled-lip sneer as their primary method of disagreeing with actual Republicans?

There’s a reason for that. It’s not just a coincidence. They are liberals in most of the ways that count, and that includes the belief that they are members of the High Caste and do not need to answer insolent questions from their lessers, but merely need to sneer such questions down.

The aristocrat does not stoop to answer the objections of the commoner; he merely fixes an aristocratic glare at him and expects him to whither under the force of his sun-like bearing…..”

While in Dubai, Bush criticized the Trump Administration’s lack of progress on immigration reform. Then he weirdly noted, “Americans don’t want to pick cotton at 105 degrees, but there are people who want to put food on their family’s tables and are willing to do that.”

Where to start when Republican elites confirm their own stereotypes?

First, Republicans should agree with Churchill’s dictum about the inadvisability of criticizing one’s government while in a foreign country: “When I am abroad I always make it a rule never to criticize or attack the Government of my own country. I make up for lost time when I come home.” Bush repeatedly followed that guidance when he insisted that he would not attack Barack Obama—even at home. But not now.

Second, Bush is far more critical of Trump’s efforts to reach a compromise on DACA and border security than he was of Barack Obama’s illegal and politically expedient 2012 pre-reelection executive order nullifying immigration law and enforcement….”

Firewatch in reply to notamemberofanyorganizedpolicital. | February 13, 2018 at 4:40 pm

Tom Servo in reply to notamemberofanyorganizedpolicital. | February 13, 2018 at 5:16 pm

I spent 8 years defending Bush from what I thought were unjustified attacks. Now I want to kick myself for ever saying a word on his behalf – he and his family have betrayed me and everyone else who supported him.

And I thought of something related to Rag’s insistence that Trump will sign an amnesty, I realized we had not specified a time frame. Since I know that, even when this weeks negotiations collapse, as they are guaranteed to, Rags will say “Well all I said was “Trump”, and President Barron Trump could still sign an amnesty bill in 2065, so I might still be right”

so I’ll specify, President Trump will not sign any amnesty bill at all in 2018.

You LOST. AND you lied.

I don’t see an amnesty bill and the Dems rejected Trump’s proposal sooo … no Tom Servo didn’t lie and yes he is right. Do you really want a link are you that depraved?

Tommi lied about what he said I said. I’ve demanded a link to what that was…MANY times now…while he did his lying “victory dance”.

So, yeah. I want the FLUCKING link. Wouldn’t you, depravo…???

It is best to not write about ones wet dreams 🙂

Remember your gassing about “defamation”? I do.

You have really outed yourself as a completely depraved and worthless liar. I started off with a bit of respect for you – but you are not just a disgrace to this blog, you are a disgrace to your profession.

I’m STILL waiting for that link, you lying POS.

Upchuck just threw a monkey wrench into the debate. Itchy Mitchy added an amendment doing away with sactuary cities and Chucky dumped on it like a ton of bricks. This was the Dems plan all along. Well just let Chuck and Nancy stew in their own juices until the March deadline passes.

The problem with allowing any illegals to stay is that they will more than double their numbers within about twenty years. Beyond that, they are a high crime group, second only to American blacks.

We need harsh laws regarding illegal entry, so harsh that they swam back over the border.

I love people that can’t do anything with numbers. Batting .100 is horrible for for a hitter. That’s one in ten. He means 1.000. Cornyn is horrible, so i agree with Marter’s assessment. Cornyn can’t hit his weight.

They say they will make those cuts once the backlog clears in order to give “Congress time to make reforms.”

That’s one hell of a wild card there.

Or perhaps it’s a lyrical (and, as per routine, deceptive) way to say “never” … as there is no known unit of time which is sufficient for Congress to make reforms to anything.

But I imagine nobody will get too excited about it … since this whole proposal will not become a bill.

I see what you did there …

President Trump’s approach is brilliant. He’s placed a fair offer on the table that lets illegal aliens stay, but plugs the ever increasing flow.
That’s why the Left hates it. Except Blacks like it, along with the rest of lower & middle-class America. Come 5 March, those DACA kids inevitably swept up by ICE will be asking why Democrats are ignoring them by not making them legal.

notamemberofanyorganizedpolicital in reply to Icepilot. | February 13, 2018 at 4:52 pm

The Dems are already an irrelevant party – and they did it to themselves. They’re done in as the Copperhead Party of the 1800s………

The Dems have been lying and lying to themselves for decades now – as well as lying to the rest of U.S.

The Democrat Party can’t exist without a tidal wave of millions of illegal aliens invading U.S. each year.

The vast mass of Congress, both wings of the UniParty, are irrelevant. All the decisions are made at the “leadership” levels, with the Democrat “leadership” having primacy.

The make or break will be whether Schumer and Pelosi yield to Trump or not. If the Republicans go along with a functional amnesty keeping open borders, the Republican Party will have ceased to have any relevance and the utility of elections to change governments or policies will have been disproved. Then matters will eventually evolve to other means of changing governments and policies. Those means will be far less tidy.

“The vast mass of Congress, both wings of the UniParty, are irrelevant. All the decisions are made at the “leadership” levels, with the Democrat “leadership” having primacy. ”

That reminds me of how the FBI is run.

End DACA,Start Deportations, Build The Wall Now !
It would be nice if Texas could also elect a true second conservative senator,something unlike Corynholer.

Trump offers an immigration proposal making himself look good knowing there is no way either the Dems nor the GOPe will agree.

My only question now is whether or not Trump will enforce immigration laws regarding DACA illegal aliens or he will continue his six month delay in enforcing the laws of the USA. (I purchased more pop-corn this afternoon.)

I want the wall but there is still a lot that can be done while strategies are developed and put in place to force it as a budget item. The wall cannot be built even if money were donated for its specific purpose. Congress must allocate a budget. I am all for a tariff on banking remittences to Mexico. While we wait, prosecute the companies that hire illegals and prosecute the companies in silicon valley and throughout America’s tech industry for the rampant H-1b visa fraud while going head on against sanctuary cities and voter fraud.

We have more laws in the USA than we know what to do with, how about we start enforcing them until they are repealed? I want the law as it exists now to be enforced before any concessions are made.