Boris Johnson: “The pangolin is the most trafficked mammal in the world”

Boris Johnson: “The pangolin is the most trafficked mammal in the world” 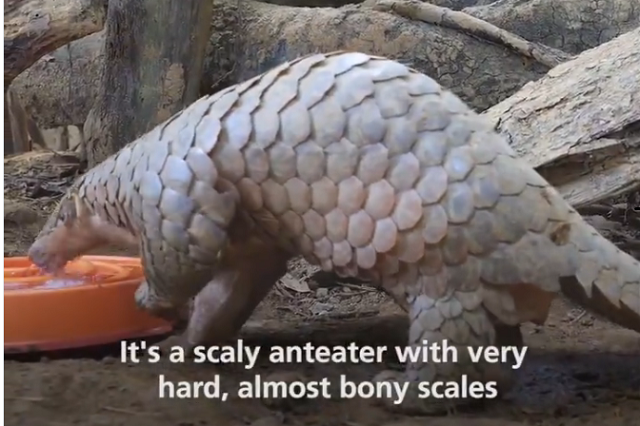 Until the prof sent me this story, I had never heard of a pangolin, and my initial impression (as a Southerner) was that it looks like a giant armadillo.  The pangolin, however, is an anteater that is currently endangered because its scales are seen as medicinal and its meat a delicacy in Africa and Asia.  As such, this scaly anteater is the most poached and most trafficked mammal in the world.

#WorldPangolinDay seeks to illuminate the plight of the pangolin and to ensure that this mammal survives into future generations.

What’s scaly from tip to tail and can curl into a ball?

These solitary, primarily nocturnal animals, are easily recognized by their full armor of scales. A startled pangolin will cover its head with its front legs, exposing its scales to any potential predator. If touched or grabbed it will roll up completely into a ball, while the sharp scales on the tail can be used to lash out.

Also called scaly anteaters because of their preferred diet, pangolins are increasingly victims of illegal wildlife crime—mainly in Asia and in growing amounts in Africa—for their meat and scales.

Eight species of pangolins are found on two continents. They range from Vulnerable to Critically Endangered.

According to the BBC, a study revealing the trafficking routes of the pangolin can aid law enforcement in protecting this endangered mammal.

Stirling University led the first ever study into how criminals were sourcing the animals from African forests.

The researchers found pangolins were being transported illegally across remote forest borders in an attempt to avoid increased law enforcement.

The pangolin is the world’s most trafficked mammal, and threatened with extinction.

The new study was led by Dr Katharine Abernethy of Stirling University’s faculty of natural sciences and also involved the University of Sussex, Gabonese researchers and other industry partners.

It found local hunters in Gabon were selling increasing numbers of the animals to Asian workers stationed on the continent for major logging, oil exploration and agro-industry projects.

The team also discovered that the price for giant pangolins had risen at more than 45 times the rate of inflation between 2002 and 2014.

The findings are published in the African Journal of Ecology on World Pangolin Day.

It is hoped they will help law enforcers tackle the increasing problem.

Former Mayor of London and current Secretary of State for Foreign and Commonwealth Affairs and MP Boris Johnson issued this plea for the pangolin on Twitter:

The pangolin is the most trafficked mammal in the world. It's vitally important that we stamp out this trade and save these beautiful creatures#WorldPangolinDay pic.twitter.com/zHieVl1WLW

When I was young my parents got some animal flash cards to teach me about all kinds of animals, and I remember the Pangolin was one of my favorites since I could hardly imagine what kind of weird animal that was! I still have never seen a living one, although I would love to.

Who knew?! They look like armadillos with scales instead of armor.

Pretty amazing creatures!! Hope that someone will indeed act to help them….the rhinos aren’t going to last much longer, either….. #PoachingIsEvil #SaveThePangolin

Well, I might just start me a pangolin ranch. If these animals are in such demand, they should be a cash crop somewhere. I wonder if I can get a DOA grant to start one.

The problem is not private ownership. As with everything else, the regulations (here CITES) make the situation worse, not better.

People take care of what they own. Governments waste assets.

This situation desperately needs a full FBI investigation and a Special Prosecutor with an unlimited budget and subpoena powers !!! ABJ

Are there any Clinton lawyers left for another Special Prosecutor?

I wonder if they like fire ants. One might make a nice living with a rental herd in Texas…

Florida and Louisiana are also potential markets for a good fire ant eating ANYTHING!

How ’bout that, you learn something every day … even if it’s useless.

The interesting integument isn’t “bony” scales; the stuff is hard keratin, like fingernails.

I learned something new this morning.

Pangolins can climb trees and do all sorts of things if Boris is to be believed. I was under the impression that albinos were the most endangered as they too are eaten for their alleged medicinal value. Bipeds simply do not rate any more. Especially white ones…

Asians evidently will kill every living thing in the hopes of getting a few more erections. Africans evidently have little means of support beyond selling off their wildlife.

I’m with the other guys who suggested commercializing the harvest or farming them. I’m sure if you’re hungry they’re probably easy enough to catch and eat. When I was a boy deer season was when the freezer was empty. I can’t hardly fault a starving man for feeding his family.