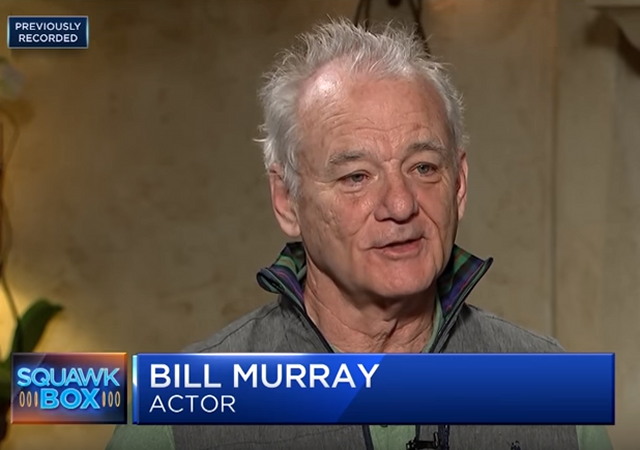 During a recent interview on CNBC, actor and comedian Bill Murray proved that he understands the harm done by identity politics. It began with questions about the #MeToo movement and Hollywood, but quickly veered into political correctness, comedy and politics.

Bre Payton of The Federalist provides a partial transcript:

Watch Bill Murray Savage Identity Politics: ‘Think About What Is Common To All Of Us’

“How can Kristen Wiig make everyone laugh?” Murray says at the two-minute mark in the video below. “She’s not thinking about being political, she’s thinking about what resonates and what is common to all of us, and I think that’s harder and harder to do because people are trying to win their point of view as opposed to saying ‘What if I spoke to everyone?’”

Murray proceeded to talk about comedy writer Jim Downey, who’s been called the “Karl Rove of SNL,” and why that label is unfair.

“He’s saying: ‘No, I just think the way the Democrats handle things is poor where they try to pick out little pieces of a population,” Murray said. “‘We represent the Hispanics, we represent the LGBT or something.’ And they’re not speaking to everyone all at once. And It’s almost demeaning to say, ‘I’m choosing you because you’re a splinter group, or a certain minority group.’ There’s almost a resentment that some how you’re separated, again, by a politician.”

“‘You’re my people,” he said, imitating a Democratic politician. “‘I’m in control of you, I represent you,’ instead of thinking that each citizen has a right to be respected as a citizen first, under the laws of the country.”

That’s a great explanation of identity politics as practiced by Democrats as well as why it is failing them. The video below is cued to start at the 1:43 mark, just press play:

It’s great to hear this from someone in the entertainment industry at a time when scores of liberal celebrities are hitching their wagons to the anti-Trump resistance movement.

On a related note, the classic film ‘Groundhog Day’ which stars Murray just turned 25 years old, if you can believe it. Susan King reports at Variety:

‘Groundhog Day’ at 25: How a Minor Holiday Gave Birth to an All-Time Comedy Classic

Some films have become so much a part of the culture that they almost seem like they’re playing on a continuous loop in our minds. Kind of like the loop Bill Murray finds himself stuck repeating in “Groundhog Day.” One of the most-beloved comedies of all time, the 1993 film celebrates its 25th anniversary on Feb. 12.

Even at the ticket kiosk at ancient Roman ruins in the south of France where he was visiting with his wife. “Though the man selling the tickets couldn’t speak English, he knew the word ‘Ned.’”

“‘Groundhog Day’ always and forever is what I am linked to, which is a good thing to be linked to,” said Tobolowsky. “I mean, it’s quite a movie.”

Nice. But I filed a complaint with the Human Rights Council for his marginalization of LGBTQAA2^PT’s.

His blithe remarks are literal violence.

notamemberofanyorganizedpolicital in reply to JohnC. | February 13, 2018 at 2:39 pm

I don’t care how many genders Obama has!

Wonder what Bill would say about this.

Another Ed in reply to notamemberofanyorganizedpolicital. | February 18, 2018 at 4:20 am

Well Bill, even a blind pig finds an acorn every once in a while. Mere words, still a douche 🙂

I gotta disagree, Murray has long been one of my favorite actors, and a refreshingly different type of man than the usual dreck that passes for “stars” in show biz these days. He has a weird (but to me hilarious) sense of humor, for example one time he was in a Wendy’s, and he walked up to a table where some guy he didn’t know was eating. He took one french fry off his plate, right in front of the guy, ate it, and then said “Go tell all of your friends about this. None of them will believe you!!!” (yeah it’s mean but its funny!)

I think I really started to like him when I found out that he and Chevy Chase have always hated each other with a passion – Chevy of course having been a life-long loudmouthed hardcore leftist. They even got into a fistfight once backstage in the old SNL days. I’ll bet it really burns Chase to have to live knowing that Murray is the one who ended up with a great film career, and Chase’s fizzled out into nothing. (he had a 10 year run)

Care to elaborate or do you just hit and run on the internets?

Oh, look, a non sequitr and an ad hominem all rolled up into non-responsive answer.

‘What if I spoke to everyone?’

White patriarchy. Imagine. Speaking to categories of people assigned grievances by progressives WITHOUT their permission or invitation. RACIST!!! Proves dominance.

Or some such tripe. I cannot keep up with the list of actions that are deemed aggressive and unacceptable from the ivory towers and their “research”.

Bill has been pretty far left in the past, so when they’ve lost him, they are really out in the wilderness.

In other news. Obamacare is still the law of the land.

notamemberofanyorganizedpolicital in reply to Andy. | February 13, 2018 at 2:41 pm

“I think we would be so lucky if Trump won,” she told The Hollywood Reporter.

“Because then it wouldn’t be Hilary.”

Barr added, however, that the election system is “all fixed.”

“I think Hillary [Clinton] probably got the receipt, because she paid for the Oval Office,” she said.”

“I don’t know.” How refreshing.

Still, he’s #1 on the list of People Who I Would Love To Visit For An Evening of Discussion and Philosophizing.

Diversity of individuals… from conception to a natural or elective death.

“I think we would be so lucky if Trump won,” she told The Hollywood Reporter.

“Because then it wouldn’t be Hilary.”

Barr added, however, that the election system is “all fixed.”

“I think Hillary [Clinton] probably got the receipt, because she paid for the Oval Office,” she said.

Bill Murray has entered the Honey Badger phase of his career.

The phase where he just doesn’t give a shit about the ‘rules’ of Hollywood anymore and says whatever he actually thinks.

Tobolowski is a very fine actor. Better to be remembered as Ned in Groundhog Day than the scheming land agent portrayed in Deadwood.

R’s are pretty good at this already, but really need to make a point of it.

EVERYTHING we ever do should be addressed to EVERYONE.

Let the D’s own the identity politics crap. We should avoid it like the plague.