“The College’s current structural model still yields a bleak future, as the deficit is projected to rise to about $9 million next year — and that’s if the market stays consistent”

One suit, by a local bakery boycotted by Oberlin students and administration based on apparently false claims the bakery racially profiled students, has been permitted to move forward. We reported on that decision in Court: Gibson’s Bakery lawsuit against Oberlin College can continue in full::

The short version is that three Oberlin students were arrested for shoplifting at Gibson’s bakery. Oberlin students claimed racial profiling, and mounted protests and a boycott supported by college student groups, administrators and faculty. The boycott continued even after police released data showing there was no racial profiling in shoplifting arrests at the bakery, and the three students pled guilty…. Gibson’s sued the college and its Dean of Students, Meredith Raimondo, for defamation and multiple other claims.

The Gibson’s lawsuit has caused a town-gown split that pits the privileged college and students against ordinary community members. 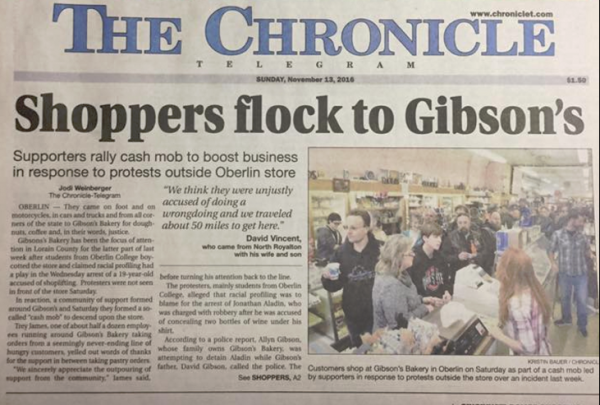 A male student who was expelled from campus in October 2016 for alleged sexual assault has filed a federal lawsuit against Oberlin. Though the lawsuit was filed in June 2017, it has not received any publicity. Yet the lawsuit contains allegations which, if proven, reflect that Oberlin’s system for adjudicating sexual assault accusations was fundamentally biased against males, at least during the 2015-2016 academic year.

As in the Gibson’s lawsuit, the alleged conduct of Dean of Students Raimondo was at issue.

Earlier this month, we reported that the student sought to file an Amended Complaint, after discovering a YouTube video in which Raimondo allegedly made statement evidencing bias against males (something her counsel denied reflected bias), Update: New allegations in lawsuit by expelled male student over Oberlin College 100% conviction rate.

The Court just issued an Order (pdf.) (full embed at bottom of post) permitting the expelled student to add the new allegations to the case through the Amended Complaint. The Court held, in pertinent part:

Plaintiff indicates that his Amended Complaint contains new allegations, which he became aware of on January 10, 2018, and that his proposed Amended Complaint removes two of the legal claims advanced in the original Complaint. The new allegations that Plaintiff seeks to add include statements made by Meredith Raimondo, whom Plaintiff alleges to be responsible for Defendant’s Title IX implementation at the time that Plaintiff was a student at Defendant. The statements were allegedly made by Ms. Raimondo on June 13, 2015, in a YouTube video, and are alleged to pertain to Defendant’s approach to claims of sexual misconduct.

In its Opposition, Defendant argues that Plaintiff should not be permitted to amend his Complaint because the amendment is futile and was filed with undue delay. Specifically, Defendant indicates that the proposed Amended Complaint fails to state a claim and that the YouTube video was available on June 23, 2015….

Furthermore, while the court does not mean to suggest one way or the other as to whether Plaintiff’s Amended Complaint will withstand a motion to dismiss, the court does not have sufficient information at this time to deny its filing on the grounds of futility….

While a general higher ed bubble, particularly for small liberal arts colleges, may be contributing to the decline, it’s hard to believe that Oberlin’s recent history of turmoil isn’t a contributing factor.

When given the choice of similar colleges, it would be logical for prospective students to stay away from the ones that are constantly generating negative headlines and appear to be bastions of radicalism.

Are the social justice chickens finally coming home to roost at Oberlin?

Those financial problems appear to have deepened, according to a recent report in the student newspaper, The Oberlin Review:

President Carmen Ambar and other senior administrators have launched an 11-day presentation campaign in which all College and Conservatory faculty, administrative and professional staff, Student Senate, student media, and other constituencies will see the largest overview of Oberlin’s financial situation to date, along with Ambar’s proposed plan to rectify Oberlin’s ever-worsening deficit.

The College managed to reduce its deficit from $5 million to $3 million this year, largely due to a last-minute admissions push that secured an additional 27 students at the beginning of the academic year. Unexpectedly high investment returns after a market uptick also contributed to the decrease.

Despite the unexpected financial pickup, the College’s current structural model still yields a bleak future, as the deficit is projected to rise to about $9 million next year — and that’s if the market stays consistent.

Falling enrollment at Oberlin is a key driver of the financial problems. While other colleges are facing demographic and other issues, Oberlin should not be in such a position. It has national name recognition, and was/is considered a top tier school.

At some point Oberlin will have to confront whether the over-the-top social activism on campus, which dominates national media coverage of Oberlin, has reached the tipping point.

Rather than closing down for-profit tractor trailer schools (which will actually teach a useful profession), the US Dept of Education should close down Oberlin – or pull all federal funding.

And no more student loans – preventing a young person having a lifetime of debt after going to this sh**hole would be a great service to the student and the country.

And that’s about all we need to know.

Isn’t she one of those progs that raped her little sister and then wrote a book about it?

“The College managed to reduce its deficit from $5 million to $3 million this year, largely due to a last-minute admissions push that secured an additional 27 students…”

(Calculator) that’s about $74k per, presuming we ignore the laws of economics and assume zero variable costs per student-unit.

George, the article states that “unexpectedly high investment returns…also contributed to the decrease” in the current deficit. Easy to miss.

I find it somewhat ironic that capitalistic “investments” are even allowed at a radical, socialist haven. Talk about, “biting the hand that feeds you.” It looks a little like, “we hate free enterprise, America, but don’t screw around with our return on investment.”

Of course Oberlin is experiencing financial problems: who wants to send their kids to an asylum run by the inmates?

it would be logical for prospective students to stay away from the ones that are constantly generating negative headlines and appear to be bastions of radicalism.

It’s not clear that we can realistically postulate this. UC Berkeley has been at the forefront of radical silliness for at least fifty years, but it’s still there. Of course Oberlin is private, which might make a difference.

I agree, but the administration had to know she was a radical lunatic, but gave her this highly sensitive job anyway. Getting her out of the job would probably bring some like minded person, which wouldn’t solve Oberlin’s problem.

I’m considering a lawsuit against Gibson’s for my candy addiction.

AKA – Trump’s bull market. I’m sure they will be giving back the tainted money.

Um, back to whom?

In any case, didn’t you know it’s still 0bama’s bull market? Oh yes, and it will remain his until either (1) it ends, and Trump’s recession begins; or (2) a Democrat president takes over and it therefore becomes his. Republicans aren’t allowed to own bull markets.

Wouldn’t it be great if Oberlin ceased to exist?

I wonder if Meredith Raimondo is related to Gina Raimondo the liberal queen of RI?
Meredith did go to Brown and Gina was born in Smithfield RI.

Also Gina’s hubby Andy Moffitt taught at Brown University, where he has taught “Strategic Management for School System Excellence”, courses that he developed.

Sorry for getting off the topic…
Small liberal world if they all link together.

No wonder Oberlin thinks the patriarchy is oppressing them– one of the teams in their conference is all-male Wabash College, who is 17-1 against them since 2000 with an average score of 44-14.

The events surrounding the Gibsons lawsuit remind me of the old saying about freedom of speech not granting one the right to shout “fire” in a crowded theater. Today’s version is not being able to freely shout “racism” in public, with there being ramifications if it is shown to not be true. I am not a lawyer, but I graduated from Oberlin when it had a different reputation. It is an isolated community which is pretty much oblivious to their immediate surroundings. I recall a comment made following the election by a student who did not understand how Trump was elected because he “did not know anyone who voted for him.” So much for diversity in that person’s life. It is this same ivory-tower close-mindedness which will likely act against the college in the upcoming trial, which will be held in a Lorain County court, not an Oberlin City court. That venue and the jury will not be run by a mob mentality, and sadly I suspect many in the Oberlin community will be surprised to discover that not everyone thinks exactly like them. Reasonable people would have solved this issue in a couple of days following the incident with a quick and sincere apology to the Gibson family. But reasonable, and humble, are not qualities that I would ascribe to a mob of SJWs in full combat mode. I’ve lost count of how many times they have instead chosen to double-down in the last year.

When I see 300-400 students protesting in front of Gibsons, I have to wonder what the other 2300-2400 students are doing. Why are they remaining quiet when a vocal minority of the student population is acting in ways to have a potential adverse effect on the college’s reputation? My guess, based on my experiences there as a “conservative,” is that the quiet majority have been intimidated by the vocal minority, who are quick to accuse anyone that doesn’t toe the party line as racist, homophobic, misogynists. Inclusion and tolerance at Oberlin these days means thinking exactly the way that the vocal SJWs think. Ironically, diversity does not seem to include having different views.

My prediction here will be for the jury to side for the plaintiffs on all the issues at hand, and in addition to the damages in the suit, also award a seven digit punitive number to send a message that unwarranted public accusations which cause real damages to a business are not acceptable behavior. If a bakery in Oregon can be fined $150K for not baking a cake, is a $1M+ message here unreasonable?

Just a followup that the day after I posted this the college moved to have the venue changed to Cuyahoga County.

Does this count as yet another “double-down” as opposed to doing the right thing? We’ll know that they are truly worried when they request a shift to Berkeley, Portland, or Moscow. It is spring and the snowflakes are melting.

To me, the college is now backed up against the wall. I honestly believe that they are terrified that students will leave if anything is done to check the student’s behavior. It is truly between a rock and a hard place. If they say “no” to what the students want, the students might leave. But if they don’t say no, and allow the students to act like irrational children, the reputation of the college suffers, and prospective students will choose to go elsewhere. Maybe if they all hold hands they can keep the higher education bubble from bursting.

Holding to principles is hard, and while abandoning them in the short run seems to be the easier, softer move, in the long run the consequences will prove to be much harder. To me this is a great teaching moment about what not to do.