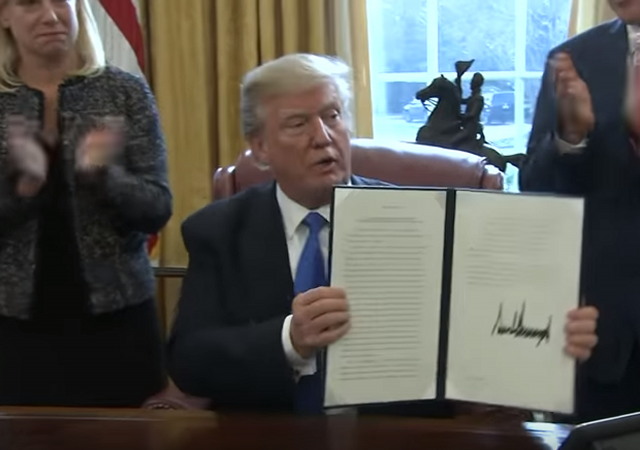 Trump often spoke of veterans on the campaign trail and frequently mentions them at rallies. This week, he took another step towards making sure our veterans get the care they so richly deserve.

He expanded mental health services for veterans who are at risk of hurting themselves.

President Trump signed an executive order Tuesday expanding mental health care services for veterans transitioning out of military service, who are at greater risk of suicide.

The order will automatically enroll veterans who leave military service on March 9 or later for a full range of mental health coverage as the administration grapples with about 20 veterans per day who take their own lives.

Mr. Trump said the plan will include “concrete actions we must take to ensure every single veteran who needs mental health and suicide prevention services will receive them immediately upon the separation from military service.”

“They get out of the military and have nobody to talk to, nobody to speak to,” the president said. “And that’s been a very sad situation, but we are taking care of them.”

Here’s a short video of the signing:

Hank Berrien of the Daily Wire has more on why this is so necessary:

Veterans Affairs Secretary David Shulkin pointed out that the 12-month period after leaving the service was the highest risk-period for suicide, noting that roughly 20 veterans a day commit suicide. He stated that was an “unacceptable number.” Shulkin added, “I’ve identified the issue of preventing veteran suicides as one of our top priorities.” Shulkin said only 40% of military members have mental health coverage.

A Naval Postgraduate School study reported that veterans who have been out of military service between 3 to 12 months are three times more likely to commit suicide than active duty members. Roughly 260,000 service members leave the military each year; the Naval Postgraduate School study stated that roughly 18.5% of veterans returning from Iraq or Afghanistan suffer from post-traumatic stress disorder or depression.

Trump tweeted this about the new order:

Today, it was my great honor to sign a new Executive Order to ensure Veterans have the resources they need as they transition back to civilian life. We must ensure that our HEROES are given the care and support they so richly deserve! https://t.co/0MdP9DDIAS pic.twitter.com/LP2a8KCBAp

Anything that expands care for our veterans is a good thing. They deserve so much better than what they have had for decades.

Is there new funding?

The message from the top is a big deal, that’s my take. The VA may not do a great job at first and there may not be a whole lot that anyone can do, but the message that the president is on your side if you’re coming back from the war and having a hard time adjusting to civilian life is a big one. You never heard that from Obama .
Unless you broke your house and get a Bergdahl or a Bradley Manning.

I sure hope this EO comes with the funding required for implementation. Maybe some of that Pakistani foreign aid money can find a new home.

It requires Congressional action to appropriate and obligate funds. POTUS has very limited authority in that area.

FINALLY! A US president does something about this! Obama? No – he was always more interested in telling everybody he was the smartest kid in the room.

Funding will be easy compared to getting the veterans to trust the VA again.

The VA isn’t the only place for help with mental health. NGOs are good at this too and there are some exceptional organizations out there.