After Trump fired him, James Comey leaked four (4) of seven (7) internal FBI memos he created regarding his interactions with Trump to a Columbia Law School professor, for the purpose of passing on the contents to a reporter. The professor did just that, and it created the basis for NY Times reporting that Trump had demanded a “loyalty” pledge and also raised the issue of shutting down the investigation into Michael Flynn.

Comey would testify to the same effect before Congress, which is when the fact of his leak came out under questioning by Susan Collins, almost by accident, and without any meaningful follow up to the bombshell testimony.

Those memos were FBI property, and were not Comey’s to remove or distribute for his personal political purposes.

That NY Times reporting created the public pressure for Rod Rosenstein, acting Attorney General since Jeff Sessions recused himself from Russia-related matters, to appoint Robert Mueller as Special Counsel. Comey admitted that creating the need for a Special Counsel was why he leaked the memos. The rest is history, and the Mueller investigation now has turned into a hunt for a crime even if not related to supposed Russia collusion.

Comey has issued tweets lately setting himself up as the most righteous man: 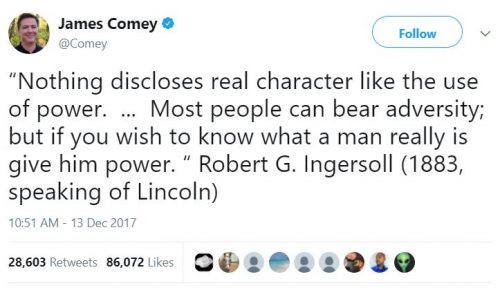 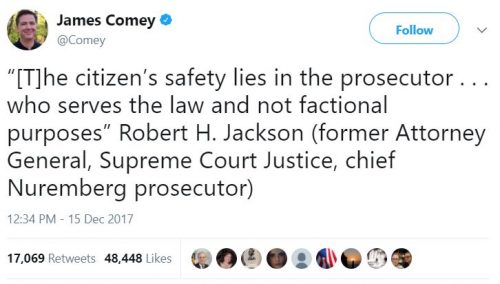 Given what we already knew about Comey’s leak, it seemed that Comey was for some other purpose — either because he knew something about Russia collusion that others didn’t know, or because he was trying to insulate himself from scrutiny.

Senator Chuck Grassley and the Senate Judiciary Committee have been trying to get information from the FBI about Comey’s memos and leak.

Yesterday Grassley released a letter that does the math and concludes that it appears that at least one of the four memos leaked by Comey was classified.

Grassley did the math in his letter, which showed that four (4) of the memos were marked as classified:

My staff has since reviewed these memoranda in a Sensitive Compartmented Information Facility (SCIF) at the FBI, and I reviewed them in a SCIF at the Office of Senate Security.  The FBI insisted that these reviews take place in a SCIF because the majority of the memos are classified.  Of the seven memos, four are marked classified at the “SECRET” or “CONFIDENTIAL” levels.  Only three did not contain classified information.  FBI personnel refused to answer factual questions during the document reviews, including questions about the chain of custody of the documents I was reviewing, the date that they were marked classified, and who marked them as classified.

The math means that if Comey leaked four of seven memos, and four of the seven were classified, then at least one of the memos leaked was classified:

Since the Judiciary Committee doesn’t know which four of the seven, because the law professor — who is cooperating with the Special Counsel — won’t tell them:

Grassley posed a number of questions to the FBI in his letter:

James Comey is a close and longtime friend of Robert Mueller. Comey’s role as a witness should have been enough for Mueller to recuse himself, since friends shouldn’t be investigating friends.

If, as the math appears to show, Comey removed and distributed classified information to a friend for transmittal to the press, then Comey also should be the subject of a criminal investigation.

Not holding my breath waiting for FBI or DOJ to do anything about this. Also sure that once again AG Sessions will be MIA.

I’m quite sure the Bureau and DoJ will be working diligently on this issue. Of course, given track records to date, their diligent work will be to stonewall, conceal and obfuscate with an aim to make the issue go away without any ability for oversight by the proper authority – the US Congress.

And both sides in the US Congress will posture and pontificate and nothing will happen.

“The lightning flashed and the thunder roared and the heavens brought forth… a chigger.”

Session’s can’t be bothered with any of this, he’s too busy chasing down potheads in Colorado.

oh, you figure the AG’s office can’t walk and chew potheads at the same time?

Good news for supporters of President Trump. The economic reports today are great and there’s more bad news for the mueller gangsters.

Listening for the *boom* of lefty and never-Trumper heads exploding.

“If, as the math appears to show, Comey removed and distributed classified information to a friend for transmittal to the press, then Comey also should be the subject of a criminal investigation.”

Yep. As I’ve said, “Let all the poisons that lurk in the mud hatch out”. Investigate all the things. Charge as appropriate.

That comment was just a test…right? You wanted to see if people were reading your comments before rejecting your angry pseudo-intellegence. Good job, well done…

When Comey and Mueller first came onto the public radar, they had “reputations” of absolute integrity. Remember? Who sold that BS? The MSM and the swamp. That should have been a clue as to their character which is now leaving the sewer and crawling in the sunlight.

Comey needs to be prosecuted to the fullest extent of the law and jailed. While he thought Hillary didn’t intend to break the law (so she would keep him in the job) he knew what he was doing and now must pay the price. His behavior has been bizarre since being fired and his reputation is in tatters. His conviction would be appropriate and equal justice.

It’s possible…just possible…that Comey is suffering from an extreme case of guilty conscience. Usually people who are accepted and work within the FBI consider it to be an honor, and they treat it as such. Yet, a long road of small self-delusional acts can end in tragedy. Comey is ending his life in a tragedy of his own making, similar to the habitual drunk driver who ends the lives of his own children (who were sitting in the back seat).

In June there was reports

Some say it does not exist now, but I doubt it. Mueller is going to protect his buddy.

If I ever intentionally leaked a classified document while I was in the Navy, I would be in Leavenworth right now. There is no question about that.

to paraphrase Leona Helmsley ‘paying attention to Classified is for the little people’.

I’m sure both of us have seen people burned for accidental mis-handling, let alone deliberate disclosure of classified material.
VP-Navy4ever 🙂

For very important officials “intent” means more than possession and distribution when weighing any charges. Comey was doing this for the good of the country, to save the world for democracy, to do the right thing, etc, etc, etc.

I would suggest that Comey had far more intent than Hillary. Hillary used unsecured equipment but fully intended that none of this ever see the light of day (her intent was to avoid FOIA, not to leak).

Comey provided the memos to Richman with the specific intent of leaking to the press.

I disagree. Clinton didn’t intend for the press our public to ever see her documents. But any person of reasonable intelligence knows that by removing classified information from classified systems and putting that information on unclassified non-governmental systems then that information will almost certainly be compromised. And the standard for anyone not named Clinton is that you have to prove there was no possibility of compromise. That’s impossible in this case, which means the default position has to be that it was.

You are defining a “leak” too narrowly. Clinton distributed classified information to all sorts off people who weren’t authorized to receive it. From Podesta, to her attorneys, to any office staff had access to their AIS, to the people at the print shop who printed out all the emails because the vindictive, malevolent b***h refused to return them in electronic form but insisted on hard copies.

All those are leaks. She deliberately gave away control of the information. She told one of her henchmen to strip off all classified markings on at least one document and send it to her on an unclas system. All of that demonstrates intent. Who knows who has it now?

“Who knows who has it now?”

Everybody. At least all our enemies.

I feel your pain, but Hillary’s mishandling of classified information was a by-product of her actual (criminal) intent – avoidance of records retention laws and the FOIA. This intent perforce caused her to neglect the rules governing classified material, making her negligent in its handling. This is why she’s guilty of negligence with respect to the classified material. Neglect occurs when someone fails to do that which they aught to have done – no intent needed. Comey pulled off one of the greatest smoke and mirrors stunts of all time.

Tell that to Petty Officer Saucier.

Deep Plunger is still plunging the depths of Water Closet.

40+ years ago, I worked for Lockheed as a contractor at AFWL.
If I had mishandled classified material (labelled or not),
I would have had a ‘suite’ at the Leavenworth Hilton.

Why Comey or his pen pals should be immune is beyond credulity!

Justice Department officials are taking a fresh look at Hillary Clinton’s use of a private email server while she served as secretary of State, The Daily Beast has learned.

My, my, my … we certainly do have a lot of laws. A huge, impenetrable fog of laws. It’s so big and so diffuse and so opaque that even the people who work at it full time can’t tell if a law has been broken.

Lock him up, with her.

The way forward on this appears obvious. Congress should subpoena Professor Richman, give him immunity and put him under oath to testify about exactly what Comey gave him (oh. Include the documents themselves in the subpoena).

Then, if there are grounds for indicting Comey, as seems likely, call Sessions in and ask him when it’s going to happen. Be specific. “Has grand jury yet been convened? Why or why not?” “If a grand jury has not yet been convened in this matter, when will it be?” Etc.

…and he will pull a Ollie North and take all the blame. Remember that little thing about not putting a witness on the stand unless you know *exactly* how they’re going to testify?

Who said anything about putting Comey on the stand? Put him in prison. Give him a few months to enjoy the cuisine and fine companionship. Then maybe offer him a deal.

NO wait – You mean the professor take all the blame for the classified documents Comey gave him? I thought I understood that reply but now I don’t think either of us does!

Is Comey guilty of gross negligence or extreme carelessness?

I would argue that the higher up in the system yo are the more diligently you should be prosecuted and the more severely you should be sentenced. If you are a leader and cannot follow the rules, then how can you expect your employees to follow those rules. Sweeping this under the rug simply because he was the FBI director only serves to delegitimize the entire legal system. Try him and if he is found guilty then make an example of him. Period. Nothing else will do.