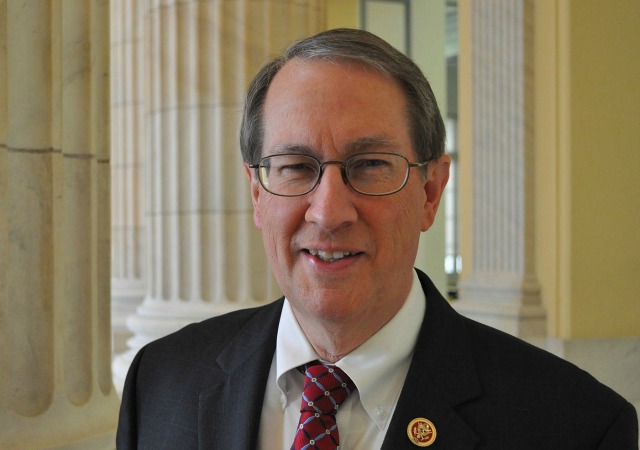 House Judiciary Committee Chairman Bob Goodlatte (R-VA) has introduced a bill that would provide legal status for those in the Deferred Action for Childhood Arrivals (DACA) program, funds for a border wall, and immigration reforms. Goodlatte, along with Rep. Michael McCaul (R-TX), Raul Labrador (R-ID), and Martha McSally (R-AZ), provided details in an op-ed in The Wall Street Journal:

A priority of our legislation is to increase the security of the southern border. Our bill would provide $30 billion to build a wall, to invest in new technology, and to improve, modernize and expand ports of entry. It would add boots on the ground: an additional 5,000 Border Patrol agents and 5,000 Customs and Border Protection officers. It would provide for the construction of additional ports of entry and a full implementation of the biometric entry-exit system, while authorizing the National Guard to provide aviation and intelligence support.

Why all the talk on immigration? Because the Democrats won’t accept a government spending bill without DACA protection..or in their words, immediate citizenship for those given protection via a DHS memo. I still cannot get over how people who care and are supposed to uphold the Constitution want to side step our laws for a memo (emphasis mine):

Finally, as requested by President Trump, our bill provides a legislative solution for the beneficiaries of the Deferred Action for Childhood Arrivals program, who were brought to the U.S. illegally as minors. DACA was first imposed through an unconstitutional abuse of executive power by President Obama in 2012. The Constitution specifically delegates the power to make immigration law to Congress.

(The representatives are wrong in this case. It was a DHS memo, not even an executive order.)

But this is where, as Professor Jacobson noted the other day, it gets worrisome. During the roundtable discussion between Trump and Congressional leaders, the professor couldn’t help but think, “here comes amnesty.” Well, it’s not exactly amnesty:

Our bill would allow DACA beneficiaries to receive a three-year renewable legal status, codifying the program the right way—by a duly enacted statute. But to be clear, there is no new or special path to citizenship for these individuals in our bill.

Importantly, our bill will help ensure that the distressing DACA dilemma does not recur after a few short years. The legislation would end “catch and release,” battle asylum fraud and require that unaccompanied minors caught at the border be treated equally regardless of their home country. Together this will ensure that the law no longer tempts minors and their parents to make the dangerous illegal journey to the U.S.—or to line the pockets of cartels that make a business of supporting these journeys.

Goodlatte appeared on a Boston radio show to explain that this is not amnesty:

“I would not be willing to give people who entered the country illegally a special pathway to citizenship. That would put them ahead of people who have gone through the long legal process to enter this country. It’s simply not a fair thing to do. And I think this status, which not only gives legal certainty to the DACA recipients, but also makes it renewable for indefinite times and therefore a permanent situation, and allows recipients of the DACA program to make use of existing paths to green cards, is a much fairer way to do that.”

The representatives stressed that the job doesn’t stop with border security. America must make actual changes to our immigration system:

Our bill would achieve these goals by cracking down on people who overstay their visas, by requiring employers to use the accurate and hugely successful E-Verify system to ensure that they hire only legal workers, and by making it easier to deport aliens who are gang members, who are aggravated felons, who fail to register as sex offenders, or who have multiple DUIs.

Our bill would put an end to chain migration, the process by which citizens and green-card holders can sponsor extended family members for their own green cards (who in turn can eventually sponsor their own extended family members, ad infinitum). It also would stop the Diversity Visa program, which awards green cards by random lottery to people with no ties to the U.S. Neither of these programs prioritizes the skills of people entering the country.

Trump described the bill as a “good starting point.” It’s possible the GOP can receive 218 votes from those within the party, “which could help them avoid getting jammed with an unpopular immigration deal from the Senate.”

Some do not think the bill could get the 218 votes. Even if it did, it will face trouble in the Senate because the GOP will need nine Democrats to avoid a filibuster. Plus, the GOP only has a one seat majority in the Senate. As we saw in 2016, GOP senators like Sen. John McCain (R-AZ) and Sen. Susan Collins (R-ME) do not fear going against their party.

Goodlatte presented the plan to members of the party at a conference meeting. We do not know yet if the leadership will bring the bill to the floor, but Rep. Mark Walker (R-NC) said that no one objected to it at the meeting.

“Even if we did have 218 Republican votes for a DACA bill, it’s not going to be close to what the Senate passes. … We need to pass a DACA bill with over 300 votes,” said Rep. Charlie Dent (R-Pa.), co-chairman of the moderate Tuesday Group.

“We we can go through this exercise for a while, until we ultimately get jammed by the Senate. We’ll indulge all these folks with this fanciful notion that we’ll somehow pass a DACA bill with 218 Republican votes — and then unicorns fly.”

Trump is right, it’s a start. What is worrisome though is the amendments Democrats will add to protect their illegal voters.

Plus the fact there appears to be too much winning in the proposed bill for Trump that democrats and democrat republicans will allow to get through.

Why make a deal at all? They have to go back.

I have actually suggested the 3 year visa before, that gives them the time to apply for citizenship or decide if they want to stay.

The other parts of the bill are a good start.

Whose country is this? Illegal aliens don’t get to “decide” if thy wish to stay here. Boot DACA people and their parents out. The nonsense about them not speaking their original language is BS.

Whose country is this? Right now, it’s the globalist left’s and george soros.

We have a chief executive on America’s side, but he is surrounded. We – the base – have to flank his opposition.

I think you need to be a legal resident for 5 years to apply for citizenship.

It’s 3 years if you’re married to a US citizen, 5 years if you’re not. I know because I did it. The UK has a very similar system, except their term for permanent residency is “Indefinite leave to remain”.

The key term, though, is “legal”. These people are not here legally, so there is no lawful pathway to citizenship for them. None. Period.

These people are not here legally, so there is no lawful pathway to citizenship for them. None. Period.”

Good !! I am tired of Scheming-Dreamers.

I have 0 sympathy for people who hopped our borders or overstayed their visa illegally. But the DACA “kids” are here to stay in one form or another. At least this bill makes them reapply for it every three years while they are on the normal path to citizenship. Ending chain migration and the visa lottery and building the wall and hiring more agents are all win-win-win big ticket items. This bill is probably as good as we can get.

No they are not. They are illegals. They have to go back.

notamemberofanyorganizedpolicital in reply to forksdad. | January 11, 2018 at 4:19 pm

That’s the attitude most other countries take against such law breakers!

My statement should not be construed to mean I don’t want DACA illegals deported, I do. But there is not the political willpower in either the Dems or the GOP to send them home. It’s not going to happen not matter how much you want them to go. At least Goodlatte’s bill doesn’t give automatic citizenship.

Prediction: Pass the House, die in the Senate.

Yup, it will die in the senate if it passes the house. Then Trump can say, congress couldn’t put it together and the DOJ and DHS have to get busy.

At least we can hope. But McConnell has always wanted grand deals (rather than good policies) and may well push for this.

President Trump holds the Ace….he will veto it. If they override (unlikely) it’s on them.

Implementation of DACA MUST be contingent up COMPLETION of the wall. Not simply funding. There are too many ways to delay and add costs, if there is no incentive for completion.

This will provide incentive to complete it by both parties, and is a worthwhile compromise for DACA implementation.

Add nationwide voter ID. It’s the only way to be sure.

“Boots on the ground” is never the promise it seems like. It’s too easy to cut funds and personnel when nobody is looking, unlike a permanent wall.

A ‘permanent’ wall is likewise not a solution in a permanent way, because future presidents can simply withdraw the border patrol from it, and the drug smugglers will cut/blast/chop holes in it faster than a herd of mice outside a cheese factory.

“A permanent wall” is like a “permanent tank”. It’s easy to defeat without constant support.

Yea, I don’t get why anyone thinks a wall that is not supported in the future will be any kind of deterrent. Maybe if we mine the area’s around it…

With that philosophy, why bother getting out of bed in the morning?

That isn’t “a philosophy”, SwineReports. It’s just a fact.

What philosophy is that?

The iron curtain only worked as long as it was guarded with weapons.

That’s a fact not a philosophy.

Walls work. They slow people down. Ask the Israeli’s.

But they will not work if in the future the laws against illegals are again ignored.

How about this for a compromise? They all get to stay. They never get a red cent of government (i.e. taxpayer) money, and they never get to vote. Hey, it’s the land of opportunity, baby, give it your best shot.

Oh right, like simpson-mazzoli beneficiaries never would be allowed to vote… until some judge came along 9 month later and said “They’re citizens, and all citizens can vote.”

If they get amnesty, they will be allowed to vote, all 16 million new democrat voters.

This is why there can never be any “compromise.” We win, they lose. That’s the only acceptable solution.

So, cede the voting clause. If they’re not on the public dole, they aren’t likely to be voting Democrat.

Slowly boiling the frogs. Cutting our throats with a dull knife instead of a sharp one.

Does ending chain migration also end birth tourism? Am I missing something?

This is not quite what it seems.

Since it gives the D’rats nothing they want, it is not a proposal for a bill which has a snowball’s chance of becoming law, at least in any scenario which requires Dem votes.

It’s a maneuver to flush out the D’rats and make it clear that they’re not interested in protecting Dreamers from summary deportation; they’re solely interested in turning foreigners into voters.

The question answers itself.

Make them vote on it as it. It will have an impact in the 2018 midterms.