Called the Holocaust a “decades-old myth” 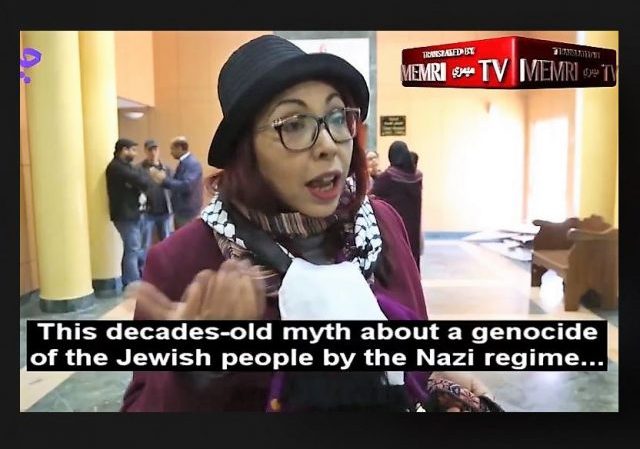 Remind me again how people who seek the destruction of Israel are only “anti-Zionist” not anti-Semitic.

From MEMRI, this incident happened in Tunisia on December 15, 2017, Protesters Smash Holocaust Exhibition at National Library of Tunisia: Holocaust Was a Myth and a Lie

Tunisians protested at the opening of a Holocaust exhibition at the National Library in Tunis, tearing down posters and chanting slogans such as “Free Palestine, out with the Zionists.” Tunisian University Professor Habib Kazdaghli, the exhibition’s organizer, said that the purpose of the exhibition was to “make our children love history” and that it had been organized months before U.S. President Trump’s Jerusalem declaration. Hamida Bessaad, a National Library researcher, said with indignation that the organizer “wants our little children to get to know the history of the Jews and learn about their Holocaust,” but that “the children of Palestine have been going through a Holocaust since 1948.” Civil society activist Kawthar Chebbi called the Holocaust a “decades-old myth” and a lie, and political activist Omar Al-Majri said that the Holocaust had been “perpetrated by the Zionist movement in collaboration with the Nazis.” This report appeared on Meem Magazine Online, an Arab Women’s Magazine, on December 15.

Protesters Smash Holocaust Exhibition at National Library of Tunisia: Holocaust Was a Myth and a Lie pic.twitter.com/KdzoiZ8P3s

Don’t think this is limited to Tunisia. The false claim that Zionists collaborated with the Nazis is a standard talking point of leading anti-Israel activists.

“The false claim that Zionists collaborated with the Nazis is a standard talking point of leading anti-Israel activists.”

That claim is indeed completely false. It was the Vatican that collaborated with the Nazis!

“That claim is indeed completely false. It was the Vatican that collaborated with the Nazis!”

Some did more than collaborate. The Grand Mufti of Palestine volunteered his services to the Nazi project, traveled to Germany to meet Hitler and thus provided himself as a recruiting advertisement. The Mufti expressed his enthusiastic support for the extermination of the Jews. He thus helped recruit thousands of Arab volunteers to join the Werhmacht, and to promote the Holocaust.

Let’s see how the weasels at the ADL downplay and distract from this one.

The Grand Mufti was an Islamist, not a Christian.

Palestinians have been conducting a war since before Israel was founded. During that time Israel’s response has been measured, and ineffective at bringing an end to that war.

The essence of war is to hurt the opponent enough that they beg for peace. Israel needs to greatly ramp up punishment, such that Palestinians really want peace.

While doing so, they should to driving Palestinians out, including out of the West Bank.