Democrats have an opportunity to pick up a seat. 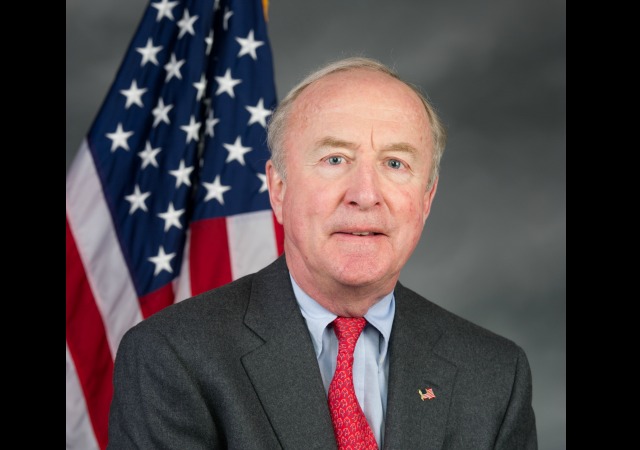 The Democrats have another opportunity to take a seat in the House of Representatives since House Appropriations Committee Chairman Rodney Frelinghuysen (R-NJ) has announced he will retire at the end of his term. He has represented New Jersey’s 11th district since 1995.

Frelinghuysen wrote in a statement:

“Today as I announce my retirement at the end of this session of Congress, I want to use the opportunity to strongly encourage the many young people I meet to consider public service. Public service is an incredible way to turn your convictions into something that serves the greater good and to do it alongside people from every walk of life and background. That has certainly been my experience here in this House, and during my Army service in Vietnam. I thank my friends and colleagues with whom I have served. My years in public service have allowed me to represent my home county of Morris for over 40 years, and also Essex, Passaic, Sussex Counties, and earlier on, Somerset! That would not have been possible without the love and support of my wife, Virginia, our two girls and my late father and mentor, Peter. The unsung heroes of my time in Congress are my staff, both in Morristown and Washington, who tend every day to the needs of 730,000 constituents!

“During my time serving here there have been times of great tragedy including the terrorist attacks of 9/11 and the ravages of Hurricane Sandy on my home state. In my role on the House Appropriations Committee, I made sure that New Jersey’s needs were met in both the immediate aftermath as well as over time in the wake of these events. I have proudly been able to secure key federal investments for New Jersey to strengthen our economy, our institutions of higher education, our hospitals and public transportation systems, to preserve open space and protect the environment and to better serve our veterans and our fellow citizens with mental illness and disabilities.

The district leans Republican, but President Donald Trump only beat failed Democrat presidential candidate Hillary Clinton by less than a percentage point. Frelinghuysen won his election in 2016 by more than 20 points, but people have viewed him as vulnerable going into the midterms.

So far over 30 Republicans have announced their retirement from the House. The Democrats only need 24 seats to take back control.

National Republican Congressional Committee Chairman Steve Stivers believes that the GOP can hold onto the seat, but that may be wishful thinking. In November, The Cook Political Report changed Frelinghuysen’s district to a toss-up:

More troubling for Republicans, Frelinghuysen looks unprepared for his first real race in decades. In May, he drew an official ethics complaint after sending an intimidating note to a board member of a local bank warning that one of his high-level employees was a “ring leader” of an anti-Trump activist group in his district. The unforced error was reminiscent of those of former GOP Rep. Scott Garrett, who went on to lose the neighboring 5th CD in 2016.

The leading Democrat is former Navy helicopter pilot-turned-federal prosecutor Mikie Sherrill, who is running with EMILY’s List’s endorsement. Republicans have panned Sherrill for living just outside the district before running, but her resume may be difficult to attack. Sherill raised $442,000 last quarter. Meanwhile, despite his Appropriations perch, Frelinghuysen raised just $154,000, far lower than an average freshman incumbent readying for a fight.

Last week, The Wall Street Journal ran an article using Frelinghuysen’s vulnerability to show how difficult it may be for the GOP to hold the majority, calling the upcoming election his first actual challenge since he first ran:

Mr. Frelinghuysen has drawn a field of opponents who say he has grown remote and out of step with his district. His leading Democratic opponent, who raised more money than he in one quarter last fall, is Mikie Sherrill, a former Navy helicopter pilot, former prosecutor, political novice and mother of four.

Mr. Frelinghuysen has taken heat at home for voting to repeal the Affordable Care Act and from Republicans in Washington for voting against their tax-cut bill. He has faced weekly protests at his district office, organized by a liberal group called NJ 11th for Change to draw attention to his decision not to hold open town-hall meetings.

“I voted for him all these years, but never again,” said Lee Karosen, a former Republican and lawyer from Cedar Knolls, who was among more than 100 people who showed up in pouring rain this month for the first anniversary of the “Fridays without Frelinghuysen” town-hall protest.

Trump has taken the fun out of being a RINO. They are going to have to fight off a conservative in the primary and then fight for their seat in the general. A lot of these fossils have not had to run a campaign in years. I remember Barney Frank being pissed about campaigning his last election, and he retired after that (Frank was not a RINO, but he was a fossil at the time).

Oh FFS! Enough of the doom and gloom!

The Dems HAVE to win 24 seats on top of keeping every one of their seats up for grabs!

Stop crying about the sky falling when it hasn’t!!!

I agree. It is hard to believe the media narrative of a blue wave when most of people parroting it as inevitable are the same people who created the Russian Collusion hoax.

Like many politicians he made the seat all about himself and never groomed replacements because he sees them as dangerous as they might run against him. He expected to die in office. Now he is the walking dead.

This may be the end of a political dynasty. There’s been a Freylinghusen from New Jersey in Congress almost uninterrupted since the framing of the Constitution (one of Rodney’s ancestors was instrumental in writing the NJ state constitution).
Morris County (I live in Union County) has been reliably Republican for some time, but given the times, it could go either way.