A sad way for a movement that exposed some of the country’s most powerful sexual predators to end. 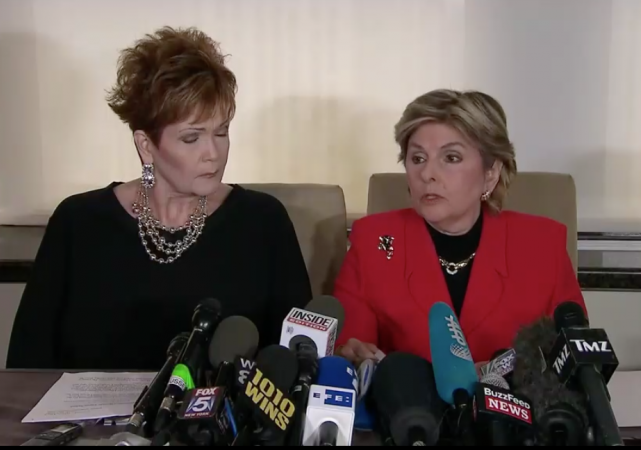 #MeToo, the movement that opened the floodgates of sexual assault and harassment allegations against the rich and powerful, has met an unfortunate fate — it’s been hijacked by partisans hoping to score political points.

Targeting political opponents by trotting out alleged victims to make public claims of events transpiring decades ago, attorney’s lusting for their 15 minutes of fame, and fundraising opportunities have tainted an otherwise noble movement to put an end to long-standing abuse.

Now, those involved in what appear to be legitimate claims finally surfacing thanks to #MeToo are voicing concern over the movement’s sudden left turn.

The New York Times has a detailed report:

As accusations take on a partisan tint, activists and lawyers fear that such an evolution could damage a movement that has shaken Hollywood, Silicon Valley, media suites in New York and the hallways of Congress — and has taken down both a Democratic fund-raiser, Harvey Weinstein, and a conservative stalwart, Bill O’Reilly.

“There is a danger in this environment that unsophisticated individuals who have been abused by powerful people could be exploited by groups seeking partisan advantage, or by lawyers seeking a moment in the limelight,” said Debra Katz, a Washington lawyer who has brought sexual harassment cases against politicians from both parties.

The lawyers and operatives behind the most politically charged cases brush off those concerns.

Lisa Bloom, who initially represented serial abuser Harvey Weinstein, was raising money to pay women to come forward and publicly accuse Trump of sexual assault. When questioned, she said any such payment arrangement was standard practiced.

And a nonprofit group founded by the Democratic activist David Brock, which people familiar with the arrangements say secretly spent $200,000 on an unsuccessful effort to bring forward accusations of sexual misconduct against Mr. Trump before Election Day, is considering creating a fund to encourage victims to bring forward similar claims against Republican politicians.

Activists on the right are also involved. In November, the Trump-backing social media agitator Mike Cernovich offered to pay $10,000 for details of any congressional sexual harassment settlements, and said on Twitter that he would cover the expenses of “any VICTIM of a Congressman who wants to come forward to tell her story.” Shortly before posting that offer, a source provided Mr. Cernovich with a copy of a sexual harassment settlement that led in December to the resignation of Representative John Conyers Jr., Democrat of Michigan, until then the longest-serving member of the House.

A sad way for a movement that exposed some of the country’s most powerful sexual predators to end. But we all knew it was only a matter of time.

Why is this bad? Is it wrong for us to expect politicians to not harass people?

The only problem is that Dems are offering money for people to fake claims.

notamemberofanyorganizedpolicital in reply to bear. | January 2, 2018 at 5:15 pm

##ME TOO – Another innocent U.S. Taxpayer…that Gloria Allred has stolen from…….

We also have a principle of due process. And, if you want to go biblical, there is a standard of three independent witnesses to convict, which is, in principle, similar to our “beyond a reasonable doubt” standard. An accuser is one witness. Hearsay witnesses are not credible. Forensic evidence is another witness. Also, witch hunts (e.g. preponderance of allegations), baby hunts (e.g. extortion), public lynchings (e.g. trial by press), and totalitarian suppression or intimidation (e.g. KKK, Antifa, diversity rackets), are not only unconstitutional, but a violation of rational and reasonable behavior.

I hope you are not implying that this happened in Alabama. That could have affected the outcome of the election! I think the people of Alabama really wanted a wacko left-wing Senator, and they will enjoy him for the next two years.

It is unlikely.someone as morally bankrupt as gloria alred and her ilk have not committed some act that could come back to destroy her.

We need to dig. Anyone know of anything?

Everything the Left touches, it turns political and thus ruins it. This is just another to add to a long list: education, news, science, etc.

Turns out buell has a lot in common with klinton: both glammed onto their husbands, and both blew it all after the husbands stepped back:

It’s funny how fast the left threw Clinton, Bill, under the bus, once he was no longer useful, over sexual assaults.

They forgave him for almost 20 years.

The true indicator that there will be no Hillary in 2020 are these sex cases.

I support Roy Moore; it makes me sick to see how he was railroaded.

If a dem had done those things, we’d be amazed that that was ALL that they had done.

Clinton was deemed nonviable, unworthy, inconvenient, or unprofitable, which, under the doctrines of the Pro-Choice Church, opens a Choice to abort him. That said, in lieu of an elective abortion, they also have a Choice to recycle him.

Well ,I guess we will see if Uncle Al really resigns tomorrow.

I would guess he does resign. It looks good for the rest of the party, and they don’t give a crap about any one particular member like Franken. Power will transfer to another party apparatchik and hardly anyone will notice.

Feminism was hijacked by chauvinist pigs a long time ago, placing women, men, children, and babies at progressive risk. Social liberalism (i.e. divergence) only served to exacerbate the normalization of dysfunction and corruption that accompanied political and social progress.

Met an unfortunate fate? You have got to be kidding me.

The #MeToo movement is a totally bogus means for women, who knowingly allowed a horrible predictor, Harvey Weinstein, to continue to exist for their own benefit, to attempt to wrap themselves in some kind of moral virtue, now. It was designed totally to benefit women who would claim to be a “victim” of inappropriate sexual advances by a MAN, preferably a Non-Hispanic White Male. It was a power trip for women. If it is going down, then good riddance.

Let’s get back to the rule of law. Where we relied upon due process and actual evidence to “convict” a person of wrong-doing.

It was obvious that this was going to happen because #MeToo was becoming too great a threat to Democrats. But they couldn’t seem like they were opposing women, so the best they could do was to shift power from Dem men to Dem women.

It’s just another scam, like transferring ownership of property to your wife for taxes.

A question regarding your headline. “Hijacked by…” or “Invented by…”? Which would be the more accurate?

It was always a witch hunt. Just because there are actually some witches this time doesn’t change the nature of the beast.