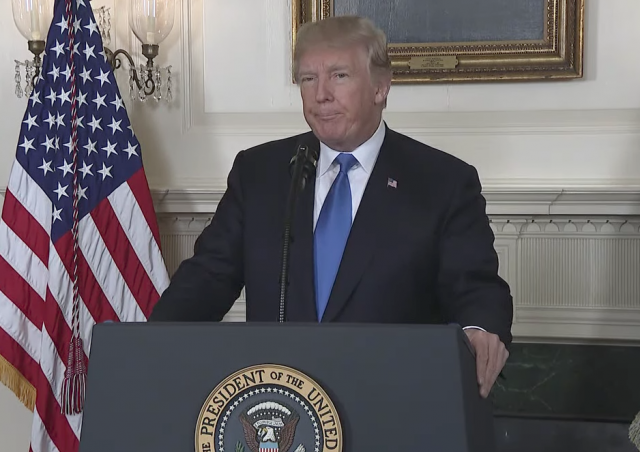 The press has had a rough 24 hours and they only have themselves to blame.

Except currently, we have no ambassador to Haiti.

There is currently no US Ambassador to #Haiti. The job has remained vacant since the last one resigned. https://t.co/FNMk6fmW0R

Frustrating to watch reporters spread "US Ambassador to Haiti has resigned" tweet without any info. We have an acting and a designee.

So widespread was the disinformation, that the State Department issued a statement correcting the record.

Then there was this tweet (now deleted) from an MSNBC segment editor, claiming our ambassador to Panama resigned in the aftermath of ShitholeGate: 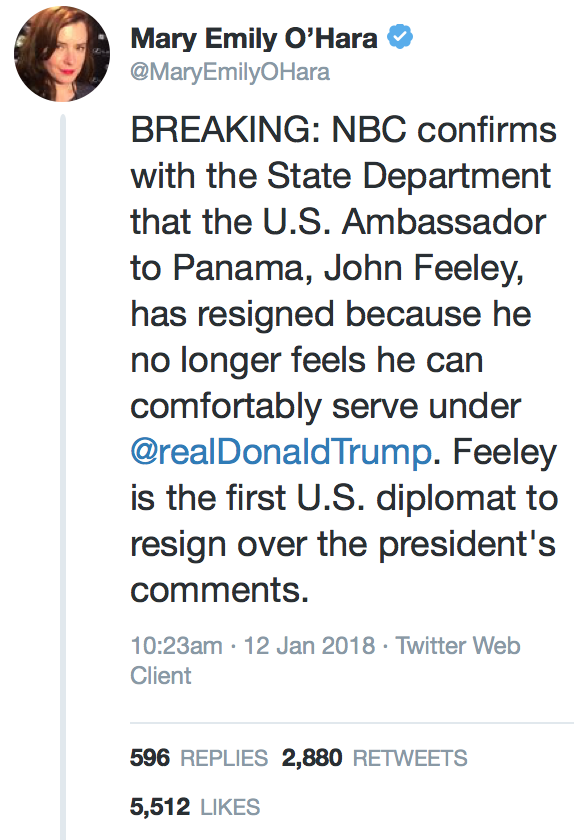 Only he didn’t resign because of ShitholeGate:

“Phrasing was misleading”? Is that what we call contrived, unconfirmed reporting now?

I deleted an earlier tweet about Ambassador Feeley's resignation over concerns the phrasing was misleading. Feeley resigned December 27th, according to the State Dept. In the resignation letter read to @reuters, he cited political conflict with the current president's policies. 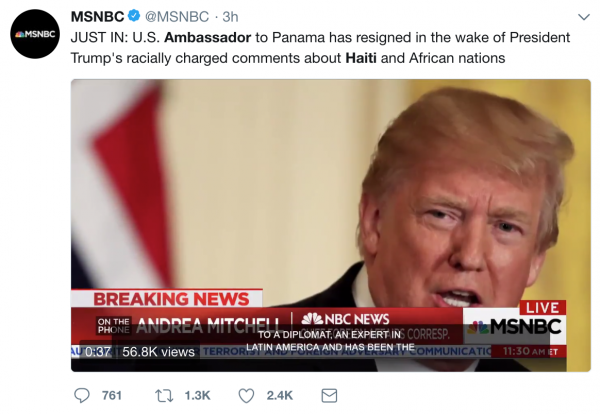 Never let a good story get in the way of the truth, they always say (probably).

Never let the truth get in the way of The Narrative. MSNBC has just deleted its ludicrous tweet, no correction, no explanation.

notamemberofanyorganizedpolicital in reply to rdmdawg. | January 12, 2018 at 7:23 pm

Did you see where lots of people are complaining to the FCC about CNN and CBS using foul language on the air?

Rip their corporate charters to pieces!

Matt_SE in reply to notamemberofanyorganizedpolicital. | January 12, 2018 at 7:52 pm

Trump’s FCC should fine them in the tens of millions of dollars, then give the settlement to border security advocacy groups, just like Obama used to do.

rdmdawg in reply to notamemberofanyorganizedpolicital. | January 12, 2018 at 7:54 pm

rdmdawg in reply to notamemberofanyorganizedpolicital. | January 12, 2018 at 8:06 pm

Rush to judgement = falling flat on one’s face. What’s sad is if they would have done just a smidgen of fact checking first they would not have made such a huge embarrassing mistake.

“Rush to judgment” would mean they make a mistake.

This was no mistake. This is pure ongoing propaganda, Soviet-style: lie, cheat, steal, kill.

Truth, institutions and country be damned.

We are preventing the stealing of our country and our treasure from the likes of globalists handling the likes of gloria allred, Turban Durbin, nancy pelosi, obama, etc.

These people are at war with us – literally. The sooner you face that, the sooner we push them back where they came from.

notamemberofanyorganizedpolicital in reply to TheFineReport.com. | January 12, 2018 at 8:56 pm

Moral of all this? Never trust Dick.

TheFineReport.com in reply to notamemberofanyorganizedpolicital. | January 13, 2018 at 3:49 am

Tell that to barry obama. You’ll break his little heart.

I would say “never trust a Dick”

Perception is a reasonable facsimile of reality. NBC et al are in the business of manipulating perception.

They did do fact checking, and I quote: “NBC confirms”, and they still fell flat on their face for what appears to be Choice, and they are not embarrassed.

Yeah, sure. Confirmed by whom? They never manage to drop those names, to they, slimy lying MSM….? Could be their hairdresser, or the best boy on set (or in the case of the WaPo/printed media, their editor’s best buddy).

Maybe they “confirmed ” the information the way they seem to do all the time now, they turn to their janitor and ask, did this happen? Tell me it happened and we are good.

If it weren’t for FAKE news the msm, like rags, would be sitting around all day with their thumbs in their mouths and in other orifices with nothing to do except report the booming economy, and the overwhelming desire of the American people to deport illegals.

“their thumbs in their mouths…”

You have the wrong orifice.

When I was in the military, we were specifically warned to avoid certain “s-hole” countries in Europe, as we and our families would be in physical danger from the corrupt police and government officials.

Having visited latino countries, we saw precisely why they deserve the moniker “s-hole.”

In the French Lesser Antilles we were warned to never leave protected areas unless we were inclined to suicide.

We have friends who ask for us to pray for them whenever they travel between towns in northern Mehico due to the cartels and roving bandits.

My travels abroad were courtesy of the USN and never seemed to include any exotic vacation destinations, but I can corroborate that a multitude of shitholes exist outside our borders. Funny sometimes how the truth can be so very ugly and how so many people are allergic to it.

Ditto. Except for Korea and New Zealand. Neither were shitholes and both were full of friendly people.

They won’t do a smidgen of fact checking. The narrative is too good to check. Like the book. Like the S hole comments. The MSM depends on the rage of the first report and the silence of the correction if one is issued.
Sad part about this is the press is destroying itself. More than ever before do not trust the MSM. If we cannot trust those who have protected freedoms (freedom of speech / press). How will we know when government is truly acting against our own interests ? At this point President Trump could actually do something illegal and many won’t believe it thanks to the little boys who cried wolf.
Cmon press, be more like good carpenters. Measure twice and cut once. Report verified truth. That way maybe we can trust what we read again.
Drain the swamp

It’s all about getting the damaging story out first and foremost, once you have created the negative narrative, going back and removing the story gives them cover, while the useful idiots spread the lies for them. Then the lie becomes their truth.

When leftists don’t get their way they pull this type of thing all the time. Now you know why Trump had that meeting in front of the cameras. I don’t think the media will ever recover credibility, they have lost their collective minds over Hillary losing, and cannot think beyond seeing how they can damage Trump. We saw BDS, that was nothing compared to this. Yet Obama could do no wrong, and negative stories rarely made the news. Or were buried under other more “important” news that furthered the socialization schemes.

Those countries are shitholes. Trump is right.

Feely was nominated for the job by BHO. Not too shocking he’d have “political conflict with the current president’s policies.”

I said this the moment I heard it, and read the statement in the WaPo, “…lawmakers overheard…”

They make sh*t up ALL.THE.F*CKING.TIME!!!

The sad fact, though, is that this has literally travelled around the world at LEAST twice, and now the truth comes to “put its pants on” as the old quote says (Twain or Churchill…take your pick).

(BTW-You should correct this – you forgot the “we”: “Except currently, have no ambassador to Haiti.”)

I should have read all the comments before replying to smalltown.

notamemberofanyorganizedpolicital in reply to DINORightMarie. | January 12, 2018 at 7:35 pm

It came from Democrat Rats, and their MSM Slaves for goodness sakes, so of course it’s FAKE NEWS!

Trump Supporters need to send lots of “chits” to the Democrat Media, because the lying media owes Americans BIG TIME!

Chit = A statement of an amount owed.

Who would you rather let immigrate to the U.S.:

1-citizens from s-hole countries; or
2-people who make up hollywood, the media and the democrat party?

Shit can be processed to mitigate undesirable traits; but, Pro-Choice is progressive and likely an indelible character flaw.

After the Obama/Clinton/DNC axis denied the left-wing Jew the Democrat nomination, and the left-aligned press instigated a multi-trimester cover-up to influence the election and, failing that, to lynch the Republican president, are we to assume the allegations and preponderance of hearsay are true?

After opening an elective abortion field in Libya, for reasons of social justice or something, it became an Obama-made shitshow after previously enjoying peace and [positive] progress under the now-aborted Gaddafi’s regime.

Gaddafi must have been on the Obama/Clinton/DNC shitlist.

He probably through Libya is the 57th state. Of course he trashed it.

I think the guys running the FBI leak investigation are having a good laugh at the bar tonight.

No good place to put this, but I think apologies are in order for Sessions. Stay tuned.

If you have a link or a tip that doesn’t fit, go to the Reader Forum on the right sidebar. Put it there.

Every time some leftie loon includes me in a comment thread that contains fake news, I link to the actual facts. Never hear from them again. Funny how they don’t want to know the truth and revel in their own ignorance.

Fuzzy, are you kidding?

You think they want to do this kind of work? —

“8 Ways to Overcome a Blow to Your Ego:”
https://www.psychologytoday.com/blog/fulfillment-any-age/201609/8-ways-overcome-blow-your-ego

“How To Move Out Of Your Parents’ Home:”
http://www.lifehack.org/articles/lifestyle/how-move-out.html

I am paraphrasing a comment that my husband saw on Twitter or somewhere about Vincente Fox criticizing Trump:

Did you make that comment standing under one of the bridges where decapitated bodies hang?

Every one of these sensational stories I treat as completely inaccurate, and usually, after a few hours or days, I am proven correct.

As loathe as I am to use this language, fake news has morphed into “$hithole journalism.” A well deserved moniker.

Depends on how you view the comment. The panama Ambassador resigned but there was no Haitian Ambassador yet appointed after a year. So the press was 100 percent correct on the resignation of the ambassador available to resign.

Of course there would have been zero resignations if our childish president could keep his potty mouth shut. I blame Trump – not Dubya.