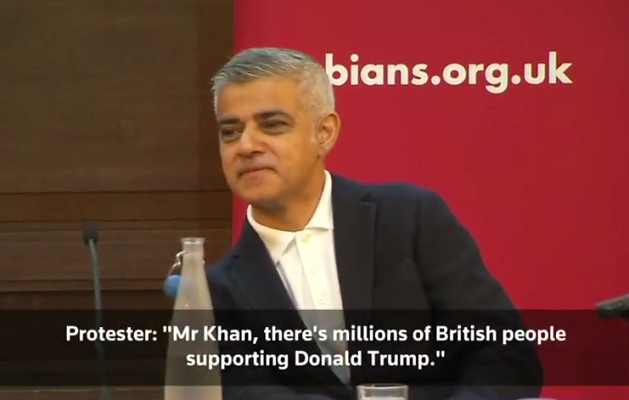 A group calling themselves the White Pendragons disrupted a speech by London mayor Sadiq Khan with pro-Trump and pro-Brexit slogans.

Supporters of US President Donald Trump have disrupted a speech by Sadiq Khan, calling for the London Mayor to be arrested.

Mr Khan was about to start speaking to the Fabian Society in London when he was disrupted by protesters from a group called the White Pendragons, who shouted pro-Trump and pro-Brexit slogans.

It came after a tweet by Mr Khan on Friday, in which he said Mr Trump had “got the message” that he was “not welcome” in London after the President cancelled a planned visit to open the new US embassy.

. . . .  As security began to appear, those in the audience started to heckle and slow-handclap.

But a demonstrator, unperturbed by the reception, said: “We stand under common law jurisdiction.

“If you touch us, you’ll be done for common assault. Please stand back, do not touch us.

“We’re not leaving, we’ve paid for a ticket.”

The demonstrator also accused the Fabian Society of “subverting” the constitution.

According to the protesters, there are “millions of British people supporting Donald Trump.”

I’d never heard of this group before, so I did a quick internet search and found the following video . . . if you can stand to listen with that parrot squawking in the background.

According to one of the websites mentioned in the video, these White Pendragons seek to “take back control” of “Our Lives, Our Freedom, Our Laws, Our Parliament, Our Borders, Our Jobs, Our Kids, Our Country.” I didn’t spend much time there, so if you find something more enlightening, please share it in comments.