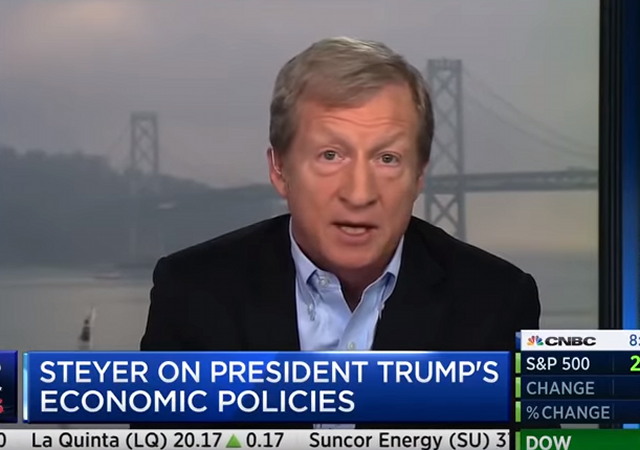 Tom Steyer has already dropped a ton of cash on an ad campaign targeting Trump for impeachment. When it comes to 2018 however, he has reportedly lost faith in the Democrats for their failure in the recent shutdown.

Tom Steyer has had it up to here. Not with us Republicans, it seems, but with his own Democrats, and he now plans to cut off their nose to spite their faces. The leftwing billionaire hedge fund speculator has announced he won’t be bankrolling the Democratic National Committee as he has in the past, based on his dissatisfaction with congressional Democrats’ refusal to continue the government shutdown and go down with it. He wanted them to just keep it shut, never mind that the public wasn’t with him. Get a load of his reasoning as reported by the Washington Examiner:

Democratic mega-donor Tom Steyer will halt donations to the national Democratic Party committees after members of the caucus voted to re-open the federal government despite failing to secure an immigration deal for Dreamers.

Chris White of the Daily Caller has more:

Billionaire Tom Steyer is refusing to donate any more money to the Democratic Party after party leaders compromised on a deal that reopened the federal government.

Steyer, who financed former Secretary of State Hillary Clinton’s presidential campaign, told Fortune Magazine Wednesday that he can no longer give money to a party that sells out on principles…

“And I want to say that after the DACA vote I have decided not to give anything to the national party committees,” he said, referring to the Democratic Party’s decision to reach a deal to reopen the government without agreeing on what should be done about the so-called Dreamers.

Steyer has contributed more than $400,000 to the three Democratic organizations since 2015 and gave money as recently as September of last year, according to Fortune. The Democrat’s money train is stopping for now. He’s instead focusing his money on other matters.

Steyer recently appeared on CNBC where he acknowledged that Democrats will be fighting an uphill battle in 2018.

“You’ll be up against that message from another famous Democratic operative, James Carville, that ‘it’s the economy, stupid,'” Quintanilla said. “Why aren’t you worried about that?”

“Listen, I think anybody who’s a Democrat and is overconfident about November 6, 2018, is wrong,” Steyer replied. “I agree with your point that this is going to be a very tough election.”

“This is going to be a hotly contested election. It’s going to be two dramatically different views of the country and our values,” he continued. “You talk about the stock market? The stock market basically benefits rich people, and so it is going to be highly contested. I completely agree with you, and I think anybody who is, you know, overconfident or taking anything for granted is wrong.”

It’s just as well that Steyer is getting out of the game. After all, Democrats don’t want big money stealing our democracy. Remember?

He’ll fund his own campaign

Gosh, he’s got a few million dollars more with Trump’s tax cuts, a few million more with the economic growth we’re experiencing, and the only thing his Democrat buddies are talking about is how to take that money away from him.

Maybe he’s not quite as deluded as he seems.

The money will go to even worse ratbags.

Tom ‘the liar’ Steyer will stay his marxist manipulation of the democrat party by denying them his capitalist cash? It’s almost if he took a page out of the factious Republican playbook.

Weak tea, Steyer. You need to escalate this into all-out war.

I’m sure George Soros will make up the shortfall.

Really Tommy????? Tell that to all the regular working people with 401k’s!

Several decades ago, Peter Drucker observed that the American system had actually realized the Marxist impossible dream…majority ownership of American companies traded on the public exchanges by American workers, mostly through their retirement vehicles.

More of the “magic” of market economics.

Steyer is simply reminding them that he owns them lock, stock and barrel.