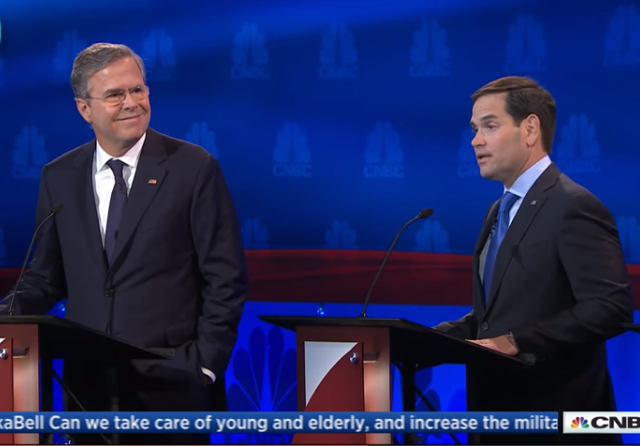 Former Florida governor and failed GOP presidential hopeful Jeb Bush has lashed out at Senator Marco Rubio (R-FL) for not “doing anything controversial” in terms of leadership on the DACA deadlock.

The dynamic between the two men is interesting, to say the least.  Jeb was Rubio’s mentor at one point, but the two had some contentious moments during the 2016 GOP presidential primaries.  Jeb never quite seemed to find his stride, and he kept tripping over himself in his feeble attempts at attacking Rubio.

Remember, for example, the infamous and cringe-worthy moment during the CNBC debate when Jeb attacked Rubio for “not showing up for work”?  And remember Rubio mopping the floor with him?

It appears Bush may be harboring some lingering resentments.

“The left and the right have figured out that [illegal immigration/DACA] is a great political wedge issue,” Bush said. “It’s not a moral issue or an economic issue. It’s purely an issue of, ‘How do we poll this to make sure our team, our tribe, does better?'”

Bush expressed particular disappointment with Sen. Marco Rubio, R-Fla., for not taking a leading role to help both sides find a middle ground. Rubio, another failed presidential candidate in 2016, was part of a bipartisan group of senators that pushed an immigration overhaul through the Senate in 2013, but he has been largely silent during the current debate.

“God forbid you actually took on something that was controversial and paid a political price,” Bush said. “That’s the attitude in D.C. right now. Certainly Sen. Rubio is no different in that regard. Marco is a talented guy and he understands this issue really well, and maybe behind the scenes he’s working hard. But at some point, his leadership would be really helpful.”

This seems like a particularly specious point given Rubio’s attempt in 2013 to take on the controversial illegal alien problem and the political price he paid (arguably, the presidency).

Ironically, neither Jeb nor Rubio stands in good stead with the Republican base when it comes to illegal immigration.  From Jeb’s illegal immigration is “an act of love” to Rubio’s involvement with the Gang of Eight (not to mention his getting rolled by Chuck Schumer, who referred to Rubio as “our Republican“).

I went to see Jeb speak when he had a rally in the Florida panhandle for his gubernatorial bid.  This was back when he “used to be a conservative,” and I was quite taken with him.  So much so that I even asked for his autograph, something I never do.  On principle.  But this woman had asked about his mother, former First Lady Barbara Bush, and then asked if he thought his brother, then-Texas Governor George W. Bush, would run for president and “let” Jeb work in his administration.

I’m not particularly good at reading people, particularly those I don’t know at all, but Jeb’s confidence visibly left him as those last words sunk in.  His eyes dulled, his shoulders sagged, and he just looked like a kicked puppy.  I felt so bad for him that I elbowed that woman out of the way and announced to no one in particular that Jeb would himself be president one day.  He perked right up, shook my hand, signed my program, and was so kind (even to the woman who had hurt his feelings).

I liked him and expected him to become governor, and he did, of course.  He even did a good job in that role, so imagine my surprise when I got a bit older, a bit more cynical, and a whole lot more conservative and Jeb went public with his sense that illegal aliens perform an “act of love” when they breach our borders, willfully and knowingly breaking our laws.

I wasn’t the only one appalled by Jeb’s pronouncement, of course.  Then-candidate Trump had plenty to say on the topic, as well.

Jeb is just the person to want to see some sort of massive amnesty.  He wasn’t always, but he is now.

Jeb failed in his bid to become president, in part, because he was too honest about his leftward lunge, and he’s now reminding us that Rubio is . . . well, less than honest about his true stance on illegal immigration.

The Bush family has always been nothing but New England progressives and carpetbaggers. You would be better off trusting a rabid dog than a Bush.

They were all Rockefeller Republicans, i.e. RINOs. George HW put David Souter on the Supreme Court fa cryin’ out loud!

notamemberofanyorganizedpolicital in reply to ChrisMallory. | January 29, 2018 at 12:18 pm

Those sorts of political opportunists were also called
“Bushwhackers!”

Isn’t he a Dixiecrat?

Easy for Jeb! to talk – he’s already lost all chance of winning the Presidency. Rubio saw his chances melt away last primary season due – totally – to his membership in the Gang of Eight. He’s just hoping that if he keeps a low enough profile that Florida voters will forget all about it.

A rhino gores a GOPe, or the pot calls the kettle black. Color me unimpressed. Good gosh, I truly hate two-faced weasel politicians.

Too bad Jeb – all those years ago – never publicly counseled brother George on how all of this stuff works.

[illegal immigration/DACA] is a great political wedge issue,” Bush said. “It’s not a moral issue or an economic issue. It’s purely an issue of, ‘How do we poll this to make sure our team, our tribe, does better?’”

Oh my. I genuinely had no idea just how clueless Jeb is.

During the campaign, Mr. Anointed Party Man was hit by a tsunami, knocked down and washed away, and even now has no idea … no idea at all … why he’s still wet.

And, remember that Jeb is the “smart” Bush.

Jeb! is trying to assert country club, establishment peer pressure on Rubio. Rubio got burned, badly, from his dealings with the open borders crowd and is lucky he’s still a Senator at all.

The last person he should take advice from is Jeb!, because Jeb! has nothing to lose by shooting his mouth off.

Ypu want the DACA problem to force the immigration reform needed and the wall? Start enforcing the law. Impose stiff civil penalties on all employers of illegals and start deporting all DACA illegals and their families.

And now it’s time to say good bye to Jeb! and all his ken, and we’d like to thank his folk for kindly dropping out, cause if he’d won the primary, then we can all agree, that Hillary Clinton would have obtained the presidency. Beverly Hill-bullies, that’s what they call them now, back gold and Texas T.

Hasn’t the Bush Family done enough damage to the GOP and the country?

I’m sorry, but Jeb Bush was NEVER a conservative. The whole Bush family has always been moderates who lean slightly conservative on financial matters but heavily liberal on social matters. Marco Rubio has always been a liberal Republican. He interned for Ileana Ros-Lehtinen, a moderate, and worked on Bob Dole’s Presidential campaign. Hardly sterling conservative credentials.

Poor Jeb had to take some time off after that statement. So much energy was exerted he needed a lengthy nap 🙂

the bushs are also no friend of Israel and have soft feelings
for the oil sheiks.

in this case of loyalty oil barons over country and long time allies.